‘Finally together again’: Royal fans say farewell to Her late Majesty Queen Elizabeth II after a photo of her headstone is released and say she has been reunited with Prince Philip

Royal fans have paid tribute to Her late Majesty Queen Elizabeth II after official pictures of her ledger stone were released by the Royal Family.

Her Majesty has now been reunited with her beloved husband, loving parents, and dearest sister in the King George VI Memorial Chapel in St George’s Chapel after her interment.

The ledger stone, made from Belgian black marble, shows the Queen’s name simply inscribed in gold lettering, alongside the Queen mother, the former King and the Duke of Edinburgh, who died age 99 in April 2021. 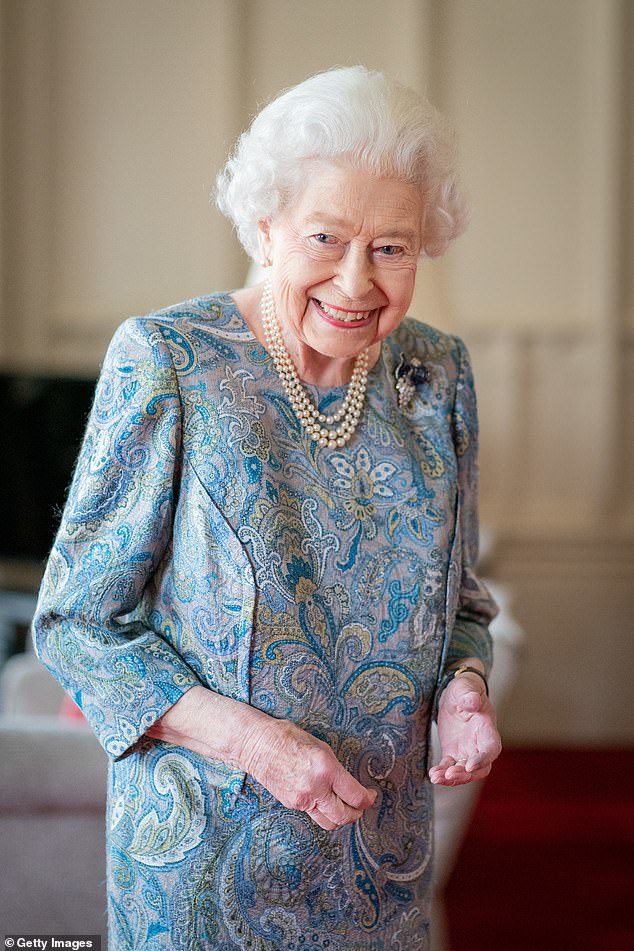 Her Majesty (pictured here at Windsor Castle in April this year) died peacefully at Balmoral on September 8. She has finally been laid to rest in Windsor 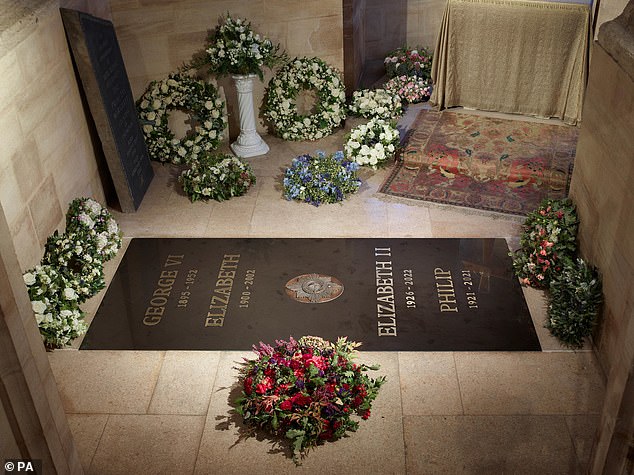 Between the two couples is a single metal Garter Star, the insignia of the Order of the Garter, the country’s oldest and most noble order of chivalry.

All four were members of the order and St George’s Chapel, where the memorial chapel is situated, is its spiritual home.

Also in the chapel is the Queen’s sister Princess Margaret, who died one month before the Queen mother at the age of 71 back in 2002 – as the Windsor Royal Family is now reunited together forever.

For one, seeing the poignant memorial provoked mixed emotions, as they revealed they found it ‘bittersweet to look at’.

Another royal watcher said: ‘This made me quite sad as it makes it more real we will never see her again.’

Royal watchers took to Instagram to share their thought on the ledger stone, with some noting that the Queen has been reunited with her late husband and family in death

Meanwhile others noted that the Queen had been reunited with her beloved family and husband.

One wrote: ‘At least they are together and happy.’

Another agreed, adding: ‘Rest in Peace your majesty, reunited with Philip. Thank you for sharing this.’

And a third simply said: ‘Finally together again!’

The Queen was laid to rest together with the Duke of Edinburgh on Monday evening in a private service attended by the King and the royal family, which followed her state funeral at Westminster Abbey and committal service in Windsor.

When Philip died 17 months ago, his coffin was interred in the Royal Vault of St George’s, ready to be moved to the memorial chapel – a pale stone annexe added on to the north side of the building behind the North Quire Aisle in 1969 – when the Queen died. 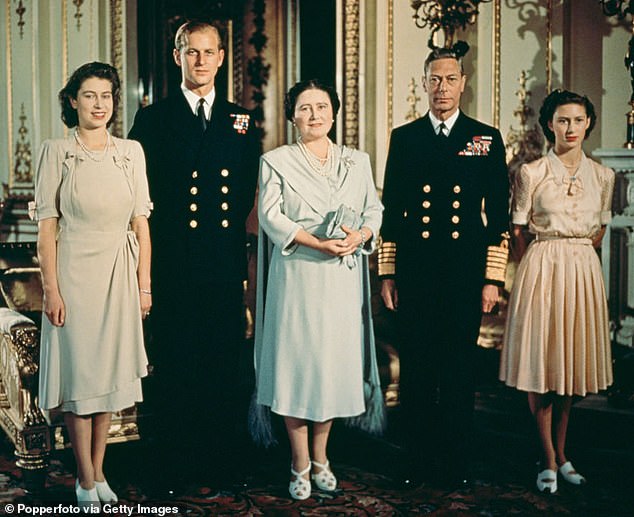 The Queen’s (on left with Philip Mountbatten, marking their engagement in a July 1947 portrait when she was Princess Elizabeth) name has been inscribed alongside her mother’s, father’s (The Queen mother middle with husband King George VI) and husband’s on the stone in the King George VI Memorial Chapel in St George’s Chapel, Windsor Castle, where the monarch was buried alongside the ashes of her sister, Margaret (far right) 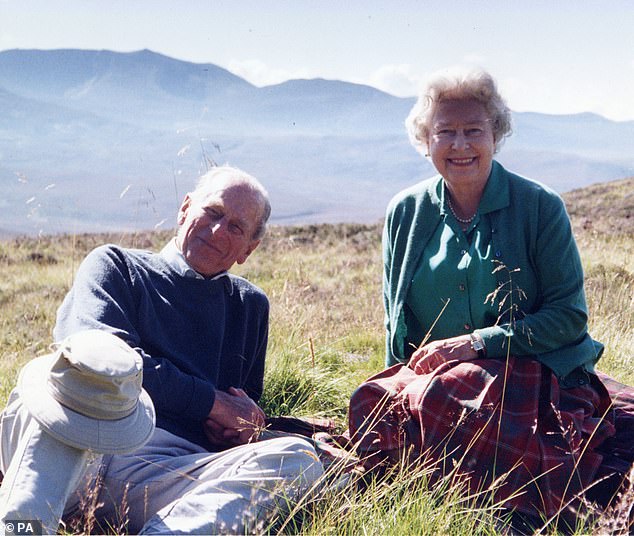 Her name was inscribed alongside that of her father George VI, Elizabeth the Queen Mother and that of her beloved late husband Philip who died last year

Their remains were then interred in the tiny family memorial annex on Monday, built on the north side of St George’s Chapel. Their coffins were gently lowered 18ft to lie one on top of the other, supported by a metal frame, inside the 10ft by 14ft chamber.

Her mother passed away aged 101 in March 2002. The Queen lost her sister, Princess Margaret, the previous month at the age of 71.  She was cremated and her ashes were initially placed in the Royal Vault, before being moved to the George VI memorial chapel with her parents’ coffins when the Queen Mother died weeks later.

George VI died in February 1952 at the age of just 56 – a moment the Queen always marked privately at her Sandringham estate.

King George’s coffin had been originally placed in the Royal Vault. But as it was his wish to rest in his own chapel with his beloved wife, a memorial chapel that bears his name was built by his eldest daughter in 1969. 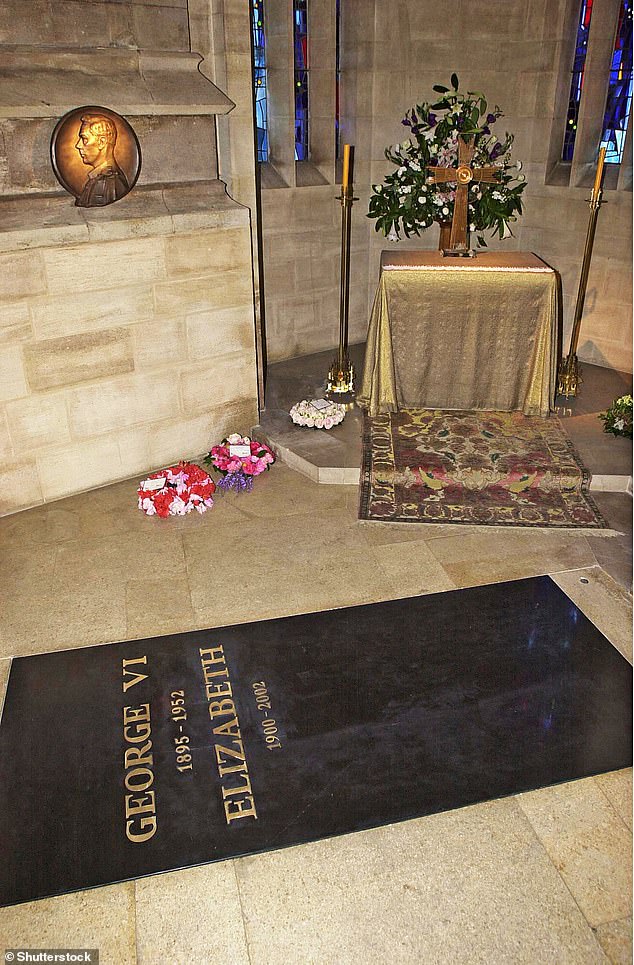 Her Majesty was interred alongside her husband, Prince Philip, and her parents King George VI and Queen Elizabeth, the Queen Mother. Pictured: A stone in the George VI Memorial Chapel at St George’s Chapel in Windsor, where the Queen Mother was laid to rest in 2002

The King George VI Memorial Chapel, which sits within the walls of St George’s Chapel, was then commissioned by the Queen in 1962 as his burial place – designed by George Pace and finished in 1969.

His and his wife’s resting place was marked by a black ledger with the inscriptions King George VI 1895-1952 and Elizabeth 1900-2002 in gold lettering.

The chapel will reopen to visitors next week on all days the castle is open to the public, excluding Sundays when it is only open for worshippers.

The public can pay their respects at St George’s Chapel from Thursday, September 29, by buying a castle tour ticket, which costs £28.50 on Saturdays and £26.50 on other days, just over a week after the late monarch’s funeral was watched by over 30million Brits.