Defence Minister Peter Dutton is in a fight to retain his Queensland seat of Dickson in an unexpected threat to one of the Coalition’s most senior figures.

The Liberal senior cabinet member, who referenced the interception of an asylum seeker boat in a last-ditch re-election pitch, is battling against Labor’s Ali France, who is facing off against Dutton for the second time. 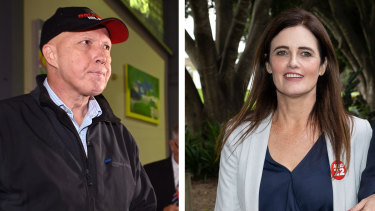 Labor’s Chris Bowen, a panellist on Channel Seven’s election coverage, told the network early projections would show Dutton being voted out after more than two decades in public office.

“Early days, and not calling it yet,” Bowen said on Saturday night. “We saw ourselves as the underdog but competitive. Early figures are perhaps better than we hoped.”

The electoral commission’s two-candidate-preferred projection shows Dutton keeping his seat with 52 per cent of the vote.

Dutton had over 41 per cent of first preference votes, with France at 31 per cent of the 56,000 votes counted at the time of print. However, the flow of preferences put the pair much closer.

Former Defence Minister Christopher Pyne said Dutton “is not going to lose his seat”, saying votes were swinging back towards him and that an earlier call for Labor was “reckless”.

Asked if Dutton was going to be the next opposition leader, Attorney-General Michaelia Cash said, “I think we have a long way to go tonight. It is all over the place at the moment. At this point in time, let’s just concentrate on the result tonight”.

Dickson, on the north-western edge of Brisbane, was a marginal seat held by Dutton at 4.6 per cent following the 2019 election.

Dutton has been the government’s loudest voice on national security during the election campaign, most notably urging Australians during an Anzac Day television interview to prepare for war due to global and regional insecurity.

Labor’s foreign policy spokeswoman Penny Wong also accuse Dutton of playing politics with national security after he held a press conference to reveal Australia had been tracking a Chinese spy ship off the coast of Western Australia for about a week. He labelled the ship’s movements “an aggressive act” by China, despite the Department of Defence leaning away from such language. 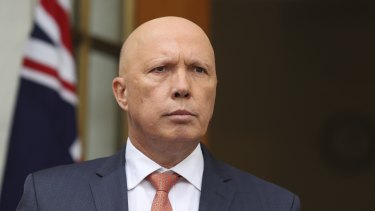 Peter Dutton was accused by Labor of playing politics with national security during the election campaign.Credit:Alex Ellinghausen

The Liberal Party on Saturday seized on the interception of a Sri Lankan asylum seeker boat trying to reach Australia, texting voters in marginal seats that they needed to vote for the party to keep the nation’s borders secure.

Dutton posted on social media: “People smugglers have obviously decided who is going to win the election and the boats have already started. Don’t risk our national security with Labor.”

Dutton launched defamation proceedings in April last year against refugee advocate Shane Bazzi over a six-word tweet accusing him of being a “rape apologist”.

Days before the election, an appeal court overturned a decision awarding Dutton $35,000 in damages over a tweet, after the author successfully argued the post did not convey the defamatory meaning Dutton had claimed.

Cut through the noise of the federal election campaign with news, views and expert analysis from Jacqueline Maley. Sign up to our Australia Votes 2022 newsletter here.