The more than 75,000 Australians who voted via telephone because they were in isolation with COVID-19 were far more likely to back Labor candidates or Greens and independents than the broader electorate.

An analysis of the COVID-19 phone voting results shows in all but eight lower house seats, Labor or the winning Green or independent candidate won a higher share of the two-candidate preferred vote. 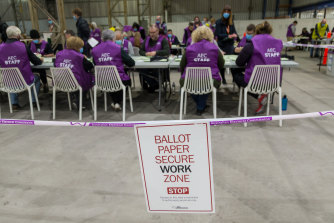 More than 75,000 people who were in COVID-19 isolation on election day were able to securely vote via phone.Credit:Australian Electoral Commission

This trend was also seen in safe Coalition-held seats, with the exception of the Nationals-held seat of Mallee.

There were 13 seats where the difference between the COVID-19 phone voting outcome and the overall outcome exceeded 10 percentage points.

The highest difference was in Richmond, where Labor’s Justine Elliot retained her seat with 57.8 per cent of the overall votes. She won the phone voting with 78.5 per cent – a more than 20-point difference. The average difference was 5.6 percentage points.

In 25 seats, the difference between the two sets of voters was great enough that the phone-in booth returned the opposite victor to the overall electorate. This includes nine seats in Queensland the Liberal National Party retained and six seats in Victoria.

In 15 of the 16 crossbench seats, the eventual victor also fared better on the two-candidate preferred count among voters who had to phone in. The only outlier was Fowler, won by independent Dai Le with 51.5 per cent of the vote against Kristina Keneally. The former Labor senator won the COVID-19 phone voting booth with 57.7 per cent of the vote, an 8-point difference.

Psephologist Dr Kevin Bonham said the trend among the telephone voters was probably explained by the demographics of those catching the virus.

“People who catch COVID tend to be younger demographics who are more likely to vote left,” he said.

“It may also be employment-related, it may also be that you have … more left-leaning voters working in industries where they are more likely to be exposed to COVID as well. I don’t have evidence on that but that is what I suspect could be the case.”

The only seats where Labor’s vote was lower in the COVID-19 booths were Labor-held Blaxland, McMahon, Lingiari, Kingston, Wills and Cooper, Liberal-held Banks and the Nationals seat of Mallee.

The Australian Electoral Commission set up special phone voting arrangements for people who caught the virus or had to go into isolation under health rules in the week before polling day on May 21. People were able to phone up in a two-step registration and voting process, and a polling place worker read out their ballot paper and took their vote. While the rate of informal votes was much lower than across the general population, there was still a handful of informal ballots cast over the phone in every electorate.

The eligibility for who was able to vote by phone was changed the day before the election to make sure people who had become sick but not sought a postal ballot in time weren’t disenfranchised.

Ultimately, 75,368 votes were cast by people phoning up to be assisted by AEC workers. A quarter of these were people living in West Australian seats, where the state was experiencing its first major COVID-19 wave after ending its domestic border restrictions in March.