Editor’s note: The video this story links to is disturbing.

Police in Columbus, Ohio, released bodycam video Tuesday night of the fatal shooting of a teenage girl earlier in the day. Interim police chief Michael Woods said at a press conference that it is unusual to have video released so quickly but “we understand the public’s need, desire and expectation to have transparency.”

Police did not identify the girl but her family and Franklin County Children Services identified her as 16-year-old Ma’Khia Bryant. The family also told CBS Columbus affiliate WBNS-TV that Bryant was the one who called the police for help, saying people were fighting outside her house. 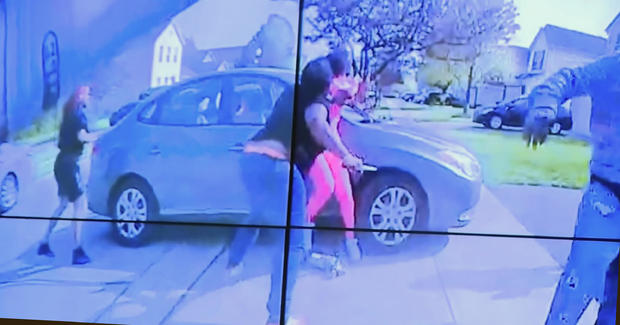 Woods said 911 received a call around 4:30 p.m. “The information was that a caller said a female was there trying to stab them and put their hands on them,” Woods said. Video of the shooting was then played, and appeared to show the shooting victim attacking two other people with what appeared to be a knife. The officer fired his weapon several times while Bryant and another girl were struggling against the side of a parked car. It was unclear what led to the altercation, which was already in progress when the officers arrived.

The officers who responded to the scene, including the one who shot Bryant, were not identified.

Woods said “medics were called right away” and CPR was administered, although that was not shown in the short video. Woods said longer video would be released once it goes through the proper “redaction process” mandated by public records laws.

“This is a tragedy for all involved, but especially the family of the female,” Woods said after the video was shown.

Woods said the Ohio Bureau of Criminal Investigation is investigating the shooting. When the BCI has finished its investigation, “the divisional police will conduct an administrative review of the actions of this officer and all officers at the scene,” Woods said.

The officer who killed Bryant will be “taken off the street” while the shooting is investigated, Woods said. He also said a decision on whether the officer violated any policy will come after the criminal investigation is complete and sent to a grand jury.

Columbus Mayor Andrew Ginther called the shooting a “horrible, heartbreaking situation” and said, “We know from this footage that the officer took action to protect another young girl in the community.”

Woods later noted that “deadly force can be used to protect yourself or (for) the protection of a third person. … Whether this complies with that will be part of that investigation.”

“We think it’s critically important to share as much information as possible, as quickly as possible,” Ginther said. “So, we’ll continue to share footage, other information in the hours and days ahead.”

The mayor also asked anybody with more information on what happened prior to the shooting “to share that information with the appropriate authorities.”

Director of Public Safety Ned Pettus Jr. said, “My heart breaks for the family. No matter what the circumstances, that family is in agony and they are in my prayers. They deserve answers. Our city deserves answers.”

He stressed, however, that “fast, quick answers cannot come at the cost of accurate answers.”

“My daughter dispatched Columbus police for protection, not to be a homicide today,” Paula said with tears in her eyes.

“Ma’Khia had a motherly nature about her. She promoted peace. That is something that I want to always be remembered,” Paula added.

Shortly after the shooting, which occurred around the same time the verdict in the trial of Derek Chauvin was announced, demonstrators began gathering at the shooting scene and at the Columbus Division of Police’s downtown headquarters.

Democratic Representative Joyce Beatty, who heads the Congressional Black Caucus and whose district includes parts of Columbus, tweeted that she’s “at a total loss of words over the tragic killing of 16-year-old Ma’khia Bryant by the Columbus Police. My prayers are with her family and friends. Our community is hurting, has experienced too much heartbreak, and deserves better.”

I am at a total loss of words over the tragic killing of 16-year-old Ma’khia Bryant by the Columbus Police. My prayers are with her family and friends. Our community is hurting, has experienced too much heartbreak, and deserves better.