Prince George is a keen tennis fan and has even been practising his swing with Roger Federer, the Duchess of Cambridge has revealed.

Kate, 37, revealed that her young son, five, is a huge admirer of the 37-year-old tennis star – who’s regularly dubbed GOAT, the greatest of all time – and has even enjoyed a knock-about on court with him at the family’s Norfolk retreat.

The Duchess shared the news while watching British player during her surprise visit to the All England Club on Tuesday.

The tennis star is a long-time friend of the royals and Kate famously offered Federer three kisses – the traditional Swiss way of greeting someone – when she and Prince William congratulated him following his eighth Wimbledon win in 2017. 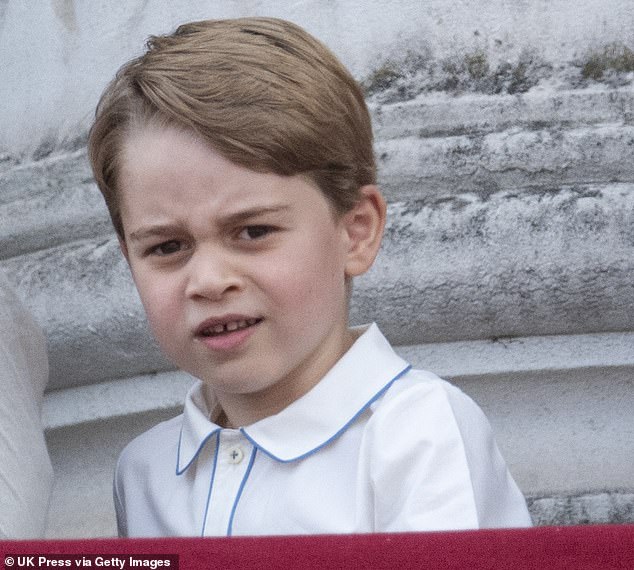 Federer fan: Prince George is a big tennis fan, his mother has revealed. The Duchess of Cambridge told British Fed Cup captain Anne Keothavong during her surprise visit to SW19 this week that her son had enjoyed hitting a few balls with the eight-time Wimbledon champion 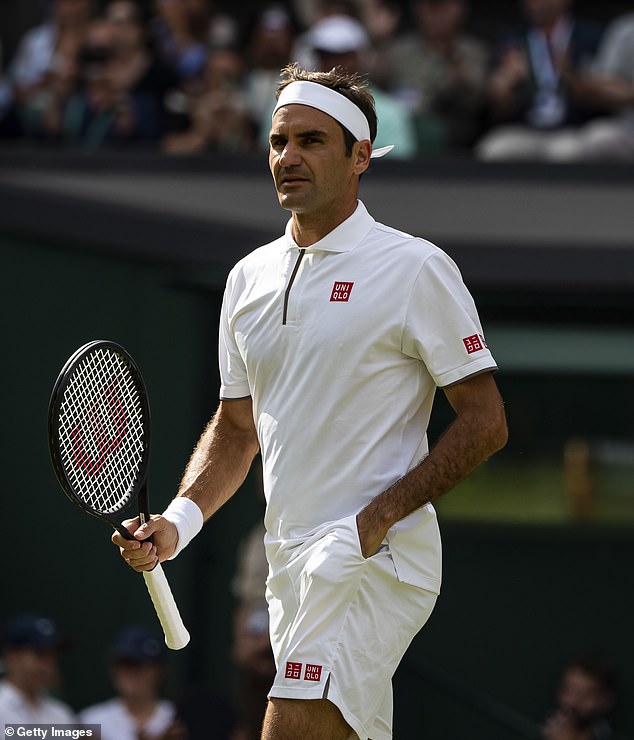 One’s tennis coach is rather good! Federer is a long-time friend of the royals and even attended the wedding of Kate’s sister Pippa to 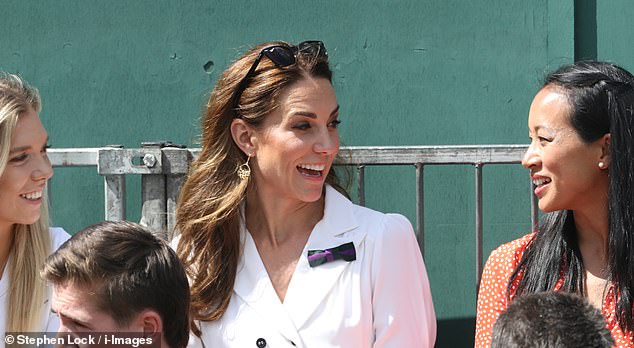 Chat: The royal apparently shared her story about George while chatting to British Fed Cup captain Anne Keothavong, right, during the royal’s visit to Wimbledon on Tuesday 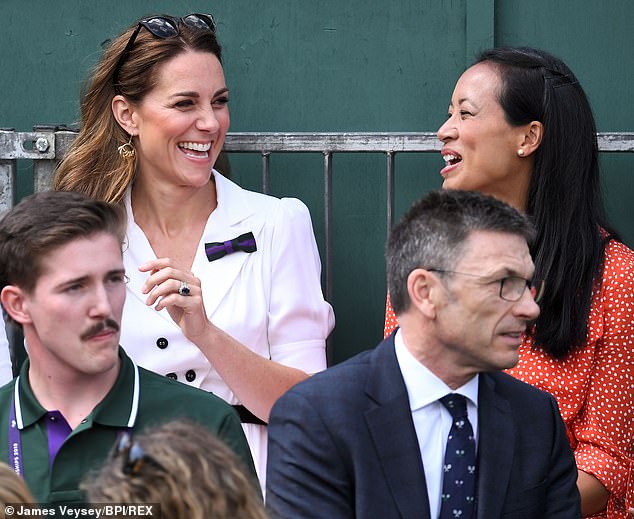 The Duchess of Cambridge, a patron of the All England Club, sat with Katie Boulter and Keothavong as they watched British rising star Harriet Dart in action on day two of the Wimbledon Championships

The former British tennis star revealed to Wimbledon’s own reporter, Adam Hunt, what sitting next to the royal had been like, before it was posted on the tournament’s Facebook page.

She told him: ‘What a special day’ — and [Kate] is such a good ambassador for tennis. She comes to Wimbledon every year, she really likes tennis, she was talking about George, apparently.

‘George’s favourite tennis player is Roger Federer, and he’s actually got to play with him. The whole family loves tennis, and George is apparently quite a good player.’

The royal couple’s Norfolk retreat, Anmer Hall, has its own tennis court and it’s there that young George is thought to have first honed his skills. In 2017, Kate revealed that her eldest son had picked up a racket while at an engagement and even asked Lawn Tennis Association coach Sam Richardson for some expert tips. 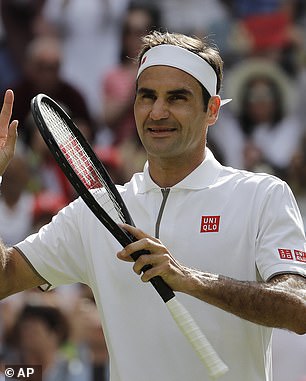 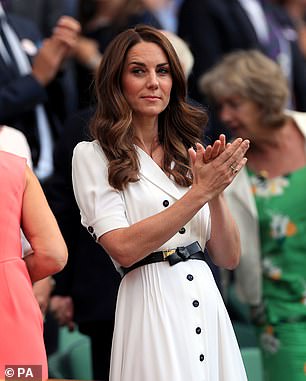 The Swiss star beat South Africa’s Lloyd Harris in a Men’s singles match on Tuesday, as the Duchess of Cambridge looked on 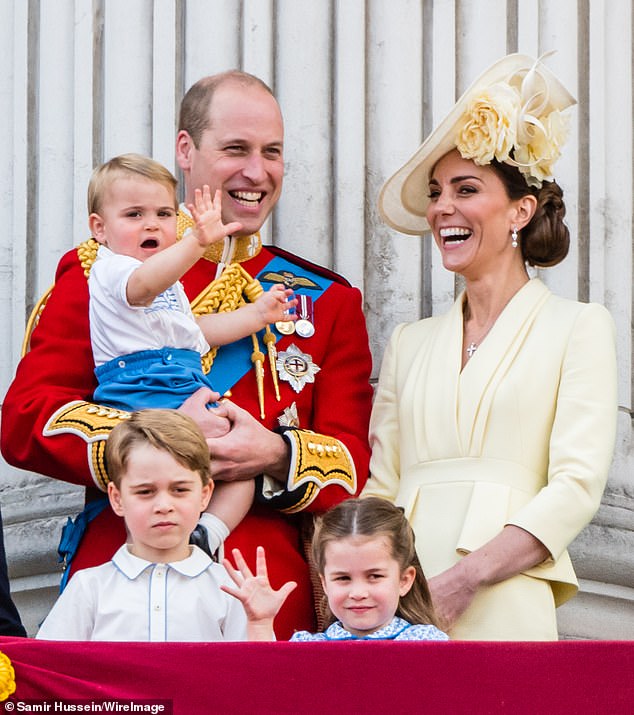 Friends in high places: Prince George pictured with his siblings, left, Prince Louis and right, Princess Charlotte, at Trooping the Colour in June, alongside the Duke and Duchess of Cambridge 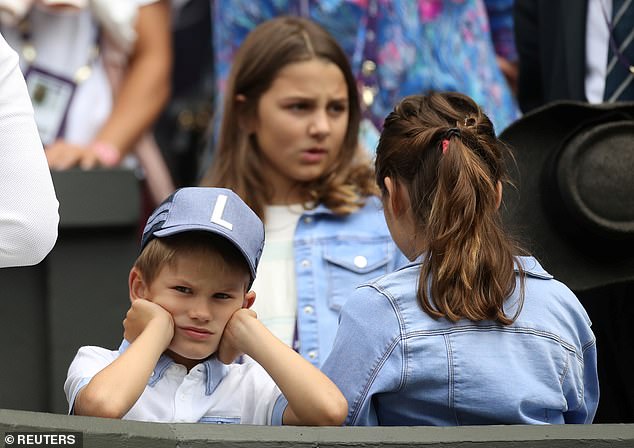 A playmate for George? Federer’s children pictured watching their tennis ace dad at Wimbledon this week

Federer is a long-time friend of the royals and even attended Pippa Middleton’s wedding in May 2017. Pippa and Federer became good pals after meeting at Wimbledon over the years and Kate’s sister even interviewed him for Vanity Fair magazine back in 2013.

And when the tennis ace won Wimbledon against the odds in 2017, Kate and William were among the crowds cheering his victory. Later Kate offered a traditional Swiss kiss – three pecks on alternate cheeks – while congratulating the star.

In November the same year, he and wife Mirka were seen visiting Kate and William with their four children Myla Rose, Charlene Riva, Leo and Lennart.