Meghan Markle and Prince Harry emphasised the importance of voting, urging US citizens to do so and make their voice heard. Sat in a garden in LA, their black labrador could be seen walking around the garden behind them.

In the video, Prince Harry revealed how he has never voted in the UK, claimed he was “not able to”.

Body language expert Judi James told Express.co.uk that Meghan was “poised and regal” in the video with a tone of “genuine, focused passion.”

The body language expert explained, though, that the Duchess appeared keen the “political pitch” went well. 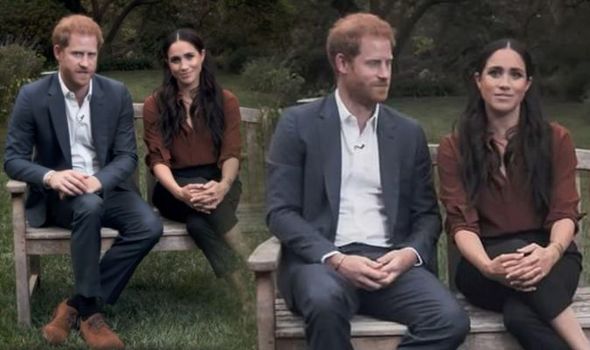 Judi said: “It’s the micro-cue at the very end of this video that hints Meghan might be hiding some thoughts about their performance.

“Her beaming smile of farewell seems to drop quickly, not in the dramatic ‘lightning smile’ trait of Melania Trump, but it slips in a way that suggests it could still be a very subtle denial gesture.”

The Duchess sits with her legs crossed, a traditionally un-royal way for the woman to sit. However, the Duchess of Sussex is adopting a far more modern approach to her work as a Duchess.

Judi said: “The way her upper foot raises and waves as Harry talks and her sideways eye-dart when he tells us that he’s not able to vote in the election (adding quickly that he couldn’t vote in the UK either, lest anyone imagine for one moment that his life is any lesser in the US) seem to show how important this appearance is to her, leading to a desire to conduct and assess as it takes place.

DON’T MISS
Has Kate Middleton or Meghan Markle had plastic surgery? [EXPERT]
Kate vs Meghan: Which Duchess is ageing better? [ANALYSIS]
Kate Middleton walks behind William – unlike Meghan – why? [INSIGHT]

“Like their video appearances, Harry is to the side of the pose, wedged against the arm of the bench while Meghan sits close, taking up more space.

“Harry’s knees are splayed but his rather slumped pose and the way his feet are together suggests a form of humility.

“Meghan is more poised and regal here, sitting upright and with her legs crossed and angled and hands clasped over her knees.”

The pair do appear in contrast though, the expert said. 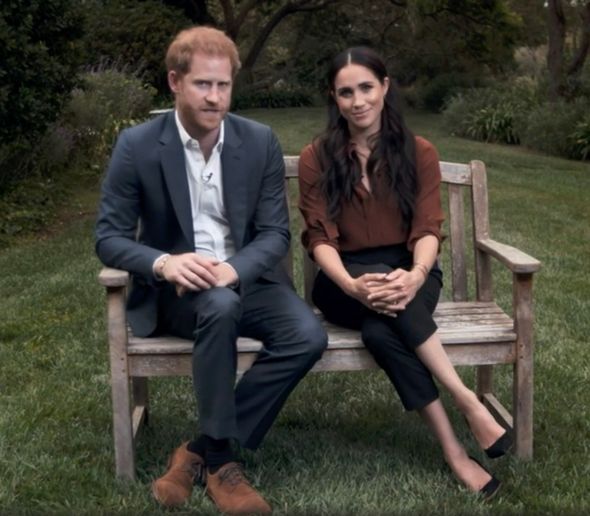 “His lips pull in before he speaks and at one point and while Meghan takes her turn to talk he even knits his fingers together and seems to crack his knuckles, which can be a self-attack like nail-biting.

“Meghan also performs some gestures of re-motivation when Harry speaks, pursing her lips and rubbing her hand on her leg in a way that could display some degree of impatience.

“This political pitch is a first for royals and the body language here suggests rather naturally that this is a tricky one for Harry who looks eager to please versus Meghan’s tone of genuine, focused passion.” 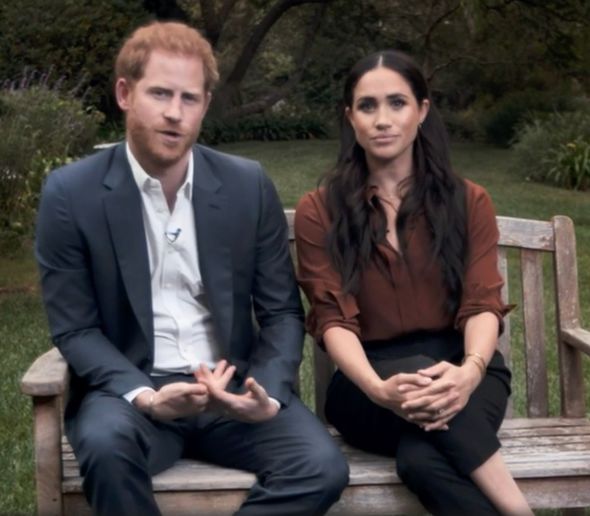 Harry and Meghan discussed “hate” and “negativity” in the video calling on people to vote.

Meghan said: “Every four years, we’re told: ‘This is the most important election of our lifetime.’

“But this one is. When we vote, our values are put into action, and our voices are heard.”

Prince Harry added, according to People magazine: “As we approach this November, it’s vital that we reject hate speech, misinformation and online negativity.