Already got the private jet booked? Prince Harry announces he will return to New York to present awards to military veterans in November – after he and Meghan sparked outrage with their woke trip to the Big Apple

Prince Harry is set to return to New York City in a matter of weeks to present awards to military veterans it was revealed today – just hours after he and Meghan returned to California following a highly-controversial multi-day trip to the Big Apple.

According to a press release issued by the Intrepid Museum on Monday, Harry, 37, will serve as a guest of honor at the 2021 Salute to Freedom Gala on November 10 – where he ‘will present the inaugural Intrepid Valor Awards to five service members, veterans, and military families living with the invisible wounds of war’.

The awards are intended to ‘honor demonstrated courage and perseverance in the face of great danger and personal struggle’ – and the event is also meant to raise awareness about the importance of mental health care within the military.

‘We are incredibly proud to bestow the inaugural Intrepid Valor Awards to five incredible individuals who have gone above and beyond the call of duty and persevered through extraordinary circumstances,’ Intrepid Museum president Susan Marenoff-Zausner said in a statement.

‘It is a core tenet of our institution to be there for our service members and veterans, who are always there for all of us.’

The statement continued: ‘We are so grateful to Prince Harry, The Duke of Sussex for honoring and amplifying the stories of these heroes and helping to raise awareness for mental health support for our men and women in uniform.’ 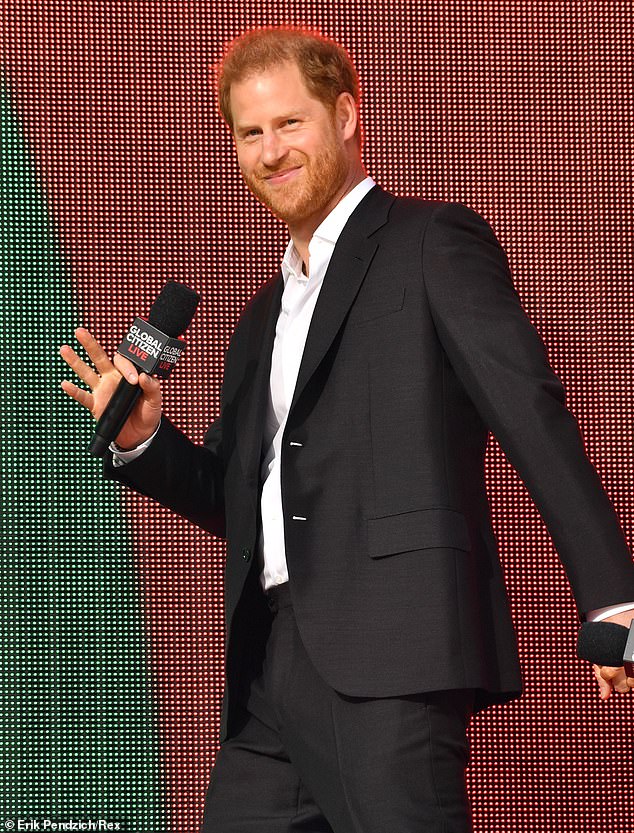 Back in the Big Apple: Prince Harry is set to return to New York City on November 10 to present valor awards to veterans and military families at the Intrepid Museum Salute to Freedom Gala 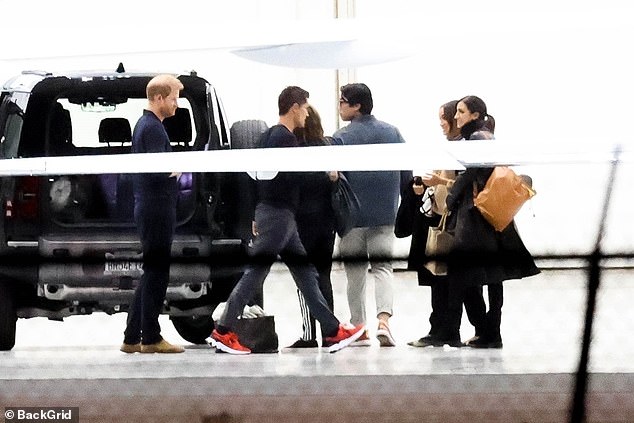 Upset: The news comes hours after Harry, 37, and Meghan, 40, sparked outrage by flying home to California from New York via private jet – despite professing themselves to be ‘eco-warriors’

Chart-topping singer Jon Bon Jovi will also be honored with a lifetime achievement award during the gala event. He and Harry have worked closely together over the last year on a series of charity initiatives, including a military choir single recorded with the Invictus Games Choir which was released to raise awareness of post-traumatic stress disorder.

The news of Harry’s involvement in the awards ceremony comes amid ongoing criticism of the Duke and Duchess of Sussex over their woke three-day trip to the Big Apple last week, from which they returned via a gas-guzzling private jet – a move that was quickly slammed as hypocritical given the couple’s very outspoken views about climate change.

Harry and Meghan, 40, were pictured embracing family members and friends as they arrived back in Santa Barbara before reuniting with their children, Archie and Lilibet, who did not join them on their whirlwind tour of the city.

Both wore wide smiles on their faces as they greeted the group of people who had gathered to welcome them home from their trip – despite coming under furious fire for their over-the-top trip to New York.

While staying in Manhattan, the couple took up residence in the upscale Carlyle Hotel on the Upper East Side, where top-tier rooms cost up to $8,800 a night.

The couple took part in string of worthy pow-wows across three days, kicking off their trip with a visit to the World Trade Center visit, followed by a visit to the United Nations where they met with US Ambassador to the UN, Linda Thomas-Greenfield for what they described as ‘an important discussion on COVID-19, racial justice and mental health.’

Their visit also included a meeting with Chelsea Clinton, part of a conversation that, again according to the couple themselves, included ‘a number of the foremost leaders on public health, pandemic preparedness, scientific progress, and community building.’

Posting on the official Instagram account for their Archewell Foundation, they professed themselves ‘so encouraged by the spirit of collaboration we heard throughout our conversation,’ and said they were ‘eager to do their part.’

In a bid to ‘do their part’ they also visited PS 123 Mahalia Jackson School in Harlem on day two of their trip – with Meghan donning an outfit costing $7,520 and around $387,000 worth of jewelry to meet with children at the school where 94 per cent of the pupils are eligible for free meals.

While there was no expense spared for Meghan’s outfit for the visit – which was meant to promote early literacy – data from the NYC Department of Education reveals an estimated 95 per cent of students at the public school fall on the economic need index.

The index means they face economic hardship, based on temporary housing, eligibility for public assistance and Census poverty rates.

During the school visit, Meghan read to a group of second-grade students from her own children’s book, The Bench, having departed the couple’s luxury Manhattan hotel in a fleet of gas-guzzling SUVs.

Harry sat cross-legged on a cushion on the ground with around two dozen seven-year-olds as they listened to the Duchess read aloud from the book.

‘I wrote this when we just had our little boy, and I haven’t read it to any other kids but you,’ she told the children.

After reading the book, she then took questions from some of the students and asked them what special place they share with the important people in their lives.

‘It doesn’t have to be a bench. It can be anywhere where you feel comfortable,’ she told them.

Meghan’s pricey ensemble for the school visit was one of many lavish designer outfits that she chose for her three-day trip to the Big Apple – where she donned a series of high-end pieces with an estimated total value of $91,689.

Throughout the visit, the Duchess’ choice of ensembles also sparked much speculation on social media – where users were left baffled by her decision to consistently don thick coats, despite the city’s very balmy balmy 80F temperatures.

She finally removed her coats for the couple’s final appearance of the trip – an on-stage speech at Central Park’s Global Citizen Live – another worthy event that has become known as ‘Wokestock’. 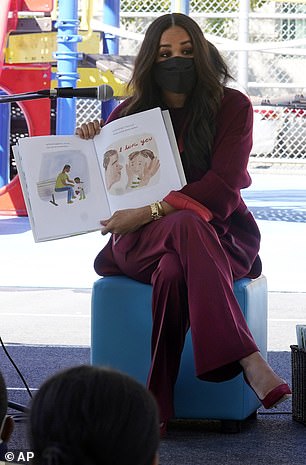 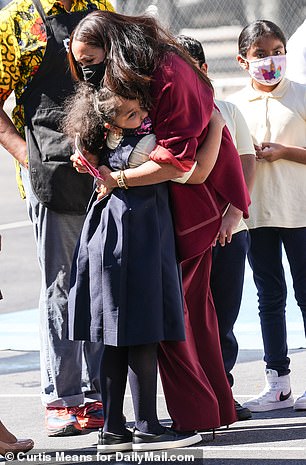 Wrong message: Meghan faced furious criticism over the lavish designer wardrobe she donned for the trip – including the $7,520 outfit she wore to read to children in Harlem 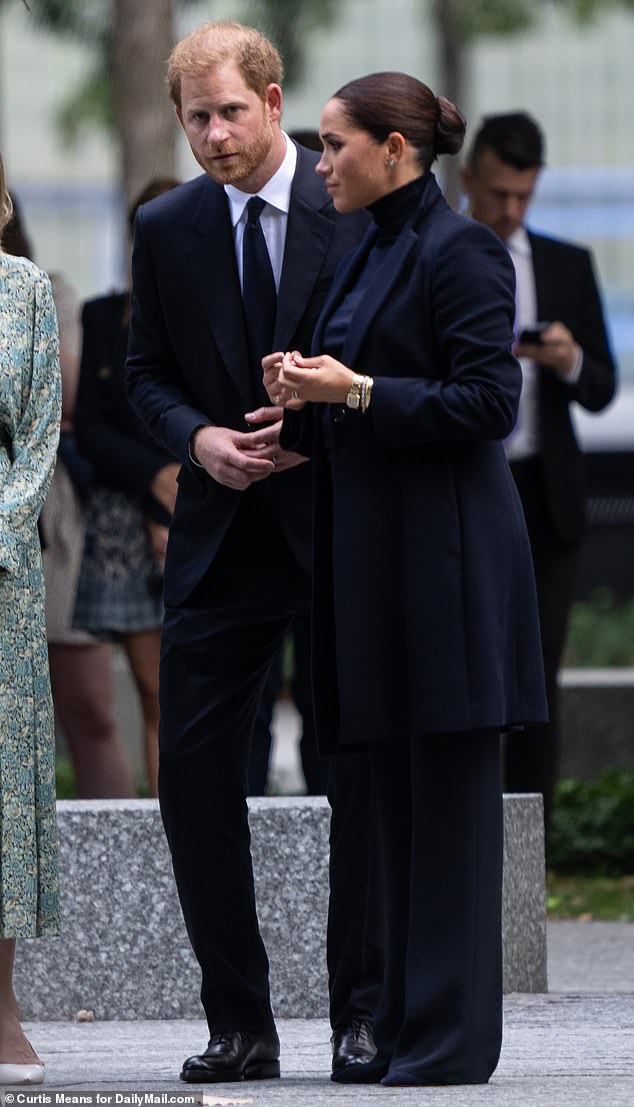 Lavish: In total, it is estimated that the Duchess (seen at the World Trade Center memorial) modeled around $91,689 worth of fashion and jewelry during her three days in the Big Apple

There, the couple walked out onto the stage hand-in-hand before calling on attendees to work together to end the COVID-19 pandemic.

Describing the pandemic as a ‘human rights crisis’, Harry and Meghan then spoke out about vaccine equity, with the Duchess telling the crowds: ‘Every single person on this planet has a fundamental right to get this vaccine. That’s the point, but that’s not happening.

‘And while in this country and many others, you can go almost anywhere and get vaccinated, billions of people around the world cannot.

‘This year, the world is expected to produce enough doses to meet the target of vaccinating 70 per cent of people in every single country, but it is wrong that so much of the vaccine supply has only gone to 10 wealthy nations so far and not everyone else. It’s just not ok.’

Once again however, Meghan’s choice of pricey ensemble jarred with her lecture about donating vaccines to poorer countries; the Duchess chose a $4,500 white Valentino dress for the occasion, which she wore with what appeared to be $16,500 Cartier earrings, as well as her beloved $12,000 Cartier watch and her $6,900 Cartier Love bracelet.

Despite the uproar over various aspects of the couple’s trip to New York, Harry clearly has not been put off the Big Apple given his plans to return in just a short few weeks for the Salute to Freedom Gala.

The event will be the latest in a series of awards ceremonies and charity events attended by the Duke in the past two years, although many of his prior appearances have been virtual, including his involvement in last November’s Stand Up for Heroes fundraiser. 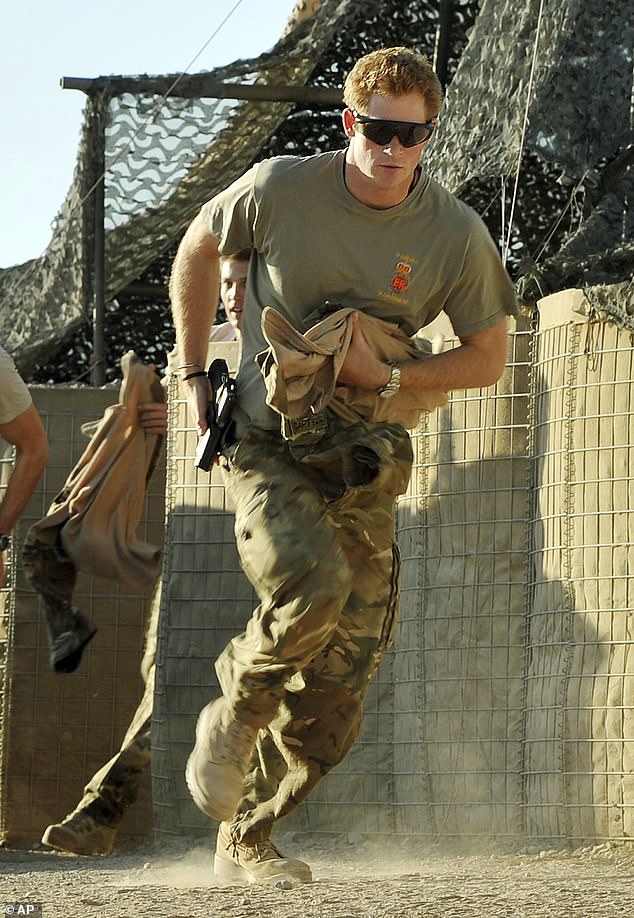 Meaningful: Prince Harry spent several years serving in the Army while he was still a member of the royal family and he’s maintained a close connection to the military while living in the US 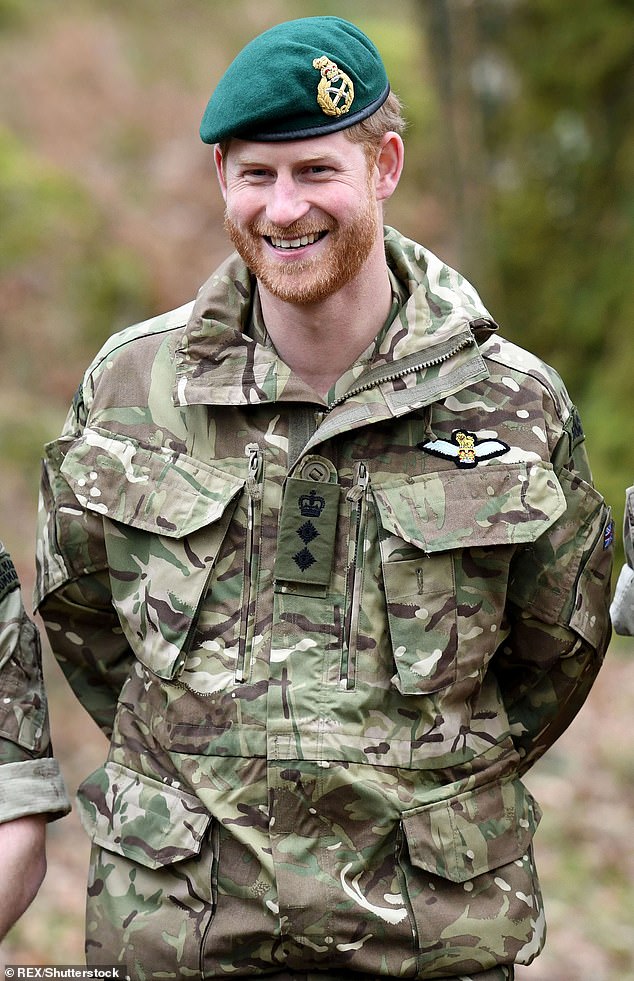 Upset: The Duke was said to have been left ‘devastated’ after he was stripped of all his honorary military titles and appointments as part of the Sussexes’ final Megxit arrangement

Harry joined a host of stars – including Bruce Springsteen and comedian Tiffany Haddish – at the annual comedy fundraiser, which was held days after he and Meghan came under fire for staging a photoshoot at the Los Angeles National cemetery, where they marked Remembrance Day in the UK by visiting the graves of fallen Commonwealth soldiers.

The couple’s visit to the cemetery was captured by fashion photographer Lee Morgan – a move that sparked furious criticism from some who felt that they had turned the event into a ‘publicity stunt’.

Before stepping down as a senior royal last year as part of Megxit, Harry – who spent many years serving in the army – marked Remembrance Day with a visit to the Cenotaph in London alongside many other members of the royal family.

During his time as a senior royal, Harry played an active royal in the military – however he was stripped of all his honorary military appointments and titles earlier this year as part of the Sussexes’ final Megxit deal with the Queen.

Harry was stripped of his role as Captain-General of the Royal Marines – handed down to him by his grandfather Prince Philip – as part of the final deal for him to step back as a front line royal.

It was reported prior to the announcement of the final ‘Megxit’ deal in February that Prince Harry, who twice toured Afghanistan with the Army, had hoped to keep the titles.

But such a plan was vetoed and the title was taken back, along with his role as Honorary Air Commandant of RAF Honington in Suffolk and Commodore-in-Chief Small Ships and Diving, Royal Naval Command.