William’s little kickers! Duke says Princess Charlotte is ‘really good in goal’ while ‘competitive’ George plays for a local team after being presented with shirts for his children while meeting England’s women’s team

Prince William was in high spirits today as he received a set of football shirts for Prince George, Princess Charlotte and Prince Louis during a meeting with England women’s team players.

The Duke of Cambridge, 39, attended the England’s women football team training session during a visit of their training centre at St George’s Park, in Burton-upon-Trent earlier today.

During the visit the royal, who sported an open collar blue suit was gifted with shirts for each of his children, Prince George, eight, Princess Charlotte, seven, and Prince Louis, four.

The shirts appeared to have each of the children’s ages on.

After he was presented with the shirts, the father-of-three commented: ‘Charlotte wants me to tell you she’s really good in goal…a budding star for the future!’ 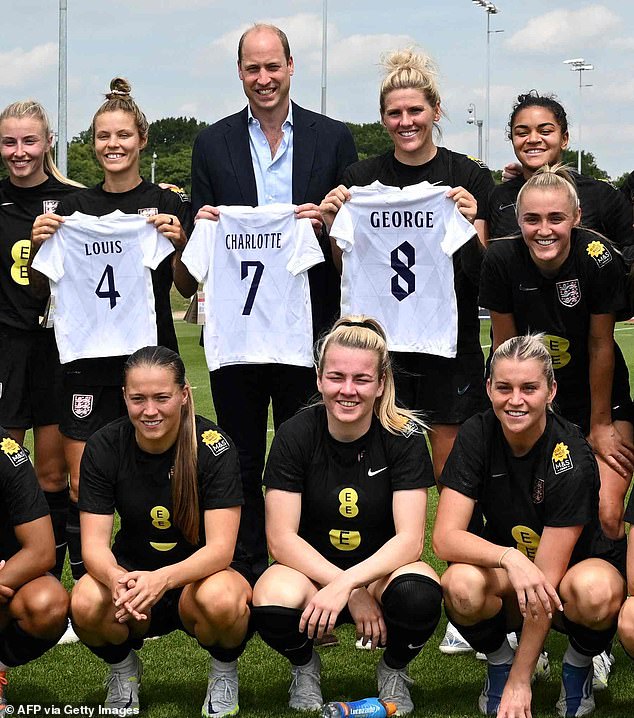 Prince William, 39, was in high spirits today as he received a set of football shirts for Prince George, Princess Charlotte and Prince Louis during a meeting with England women’s team players

The Duke added: ‘She said, “Please can you tell them that”, and I said “Okay I’ll tell them.”‘

Meanwhile as he posed for a picture holding the football shirts, he said: ‘It will look like they’ve signed for the England team.’

Elsewhere he told captain Leah Williamson that George plays for a local team, adding: ‘He gets very competitive.’

Prince George is said to be an ‘avid football fan’ and has been seen with his parents at England and Aston Villa games, while Charlotte has also been spotted at Norwich games. 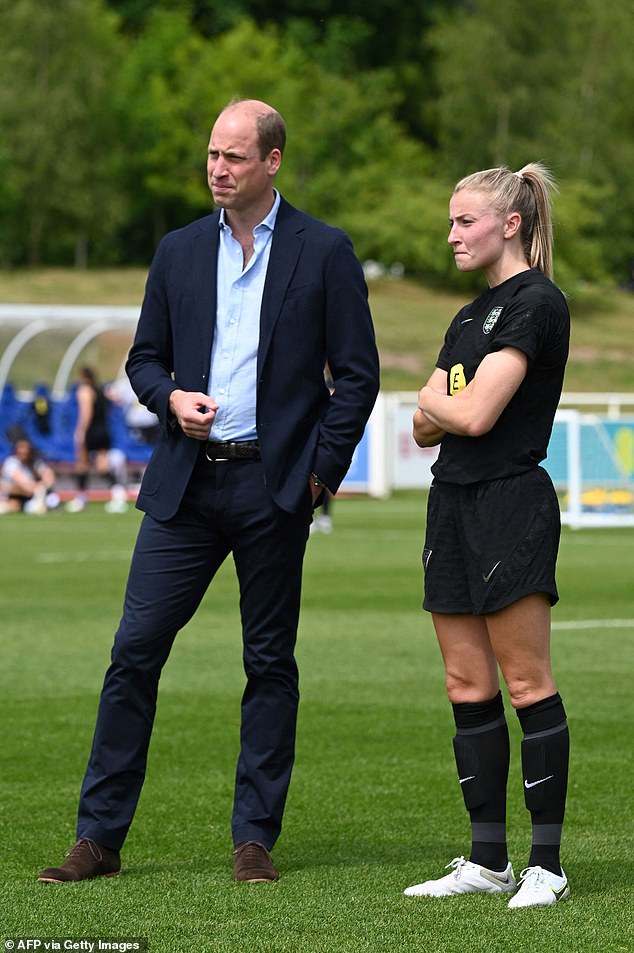 The Duke of Cambridge attended the England’s women football team training session during a visit of their training centre at St George’s Park, in Burton-upon-Trent earlier today

William is also an avid football fan and is a regular in the stands at Villa Park.

George’s love of football has been no secret, with the royal celebrating birthdays with a sports-themed parties at Kensington Palace and William saying he hopes his oldest son will one day be Villa’s ‘top goal scorer’.

The Duke could be seen chatting with players during the visit today, before he was given a tour of the training ground.

He was also seen showing off his own football skills, asking players if he could ‘have a go’ at scoring a goal.

The royal joked about his hamstrings before saying: ‘This could go anywhere!’ 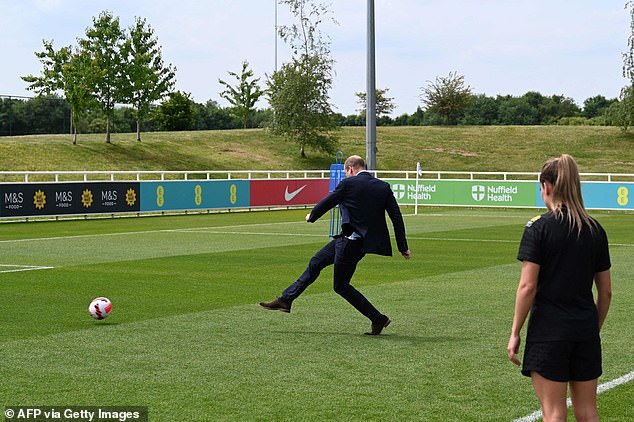 During the visit to the training ground, the Duke even showed off his own football skills as he scored a goal 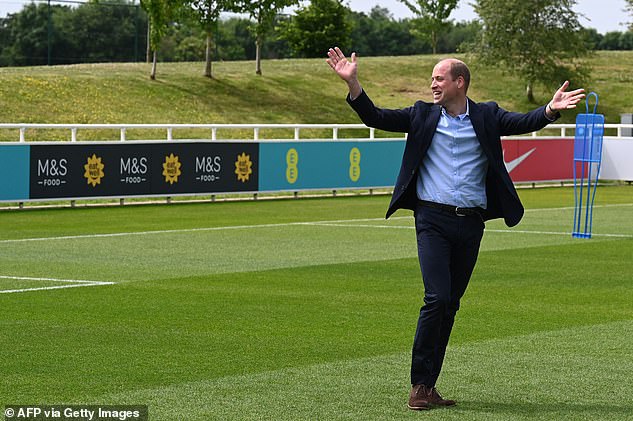 Prince William appeared overjoyed to have scored the goal, and threw his hands into the air with excitement

His ball was quickly caught by the goalkeeper, before they suggested he have another go.

After scoring a goal, the father-of-three then celebrated by throwing his hands into the air.

His visit comes as he prepares to move his family to Adelaide Cottage on Windsor Estate this summer.

The Duke and Duchess of Cambridge, are reportedly set to uproot their family from Kensington, west London, to Adelaide Cottage in Berkshire in order to be closer to the Queen.

Re-erected in 1831, the Cambridge’s new Grade II-listed retreat is just a short walk from St George’s Chapel and Windsor Castle, and sits proudly on the 655-acre royal estate in Berkshire. 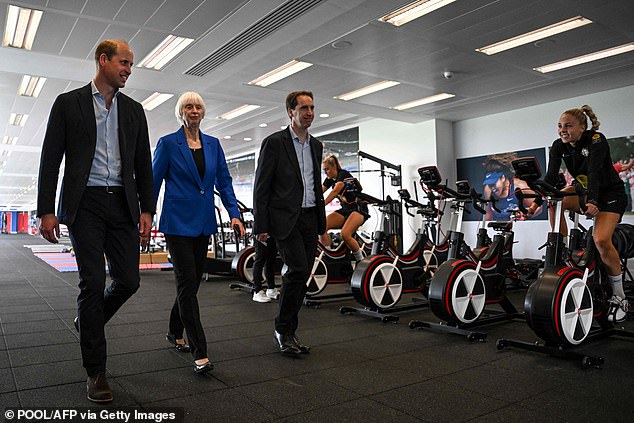 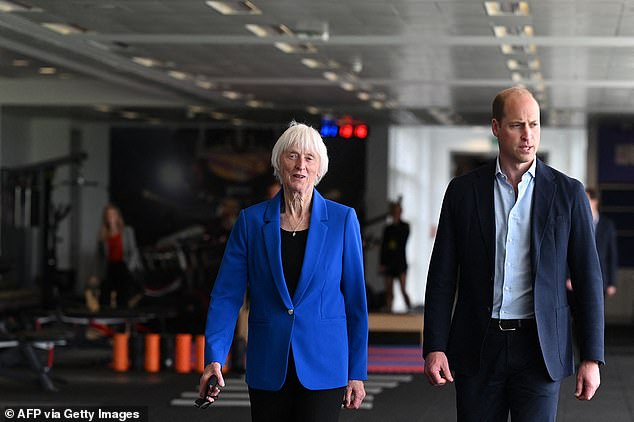 During his visit, the father-of-three was given a tour of the facilities by Head of women’s football Baroness Sue Campbell 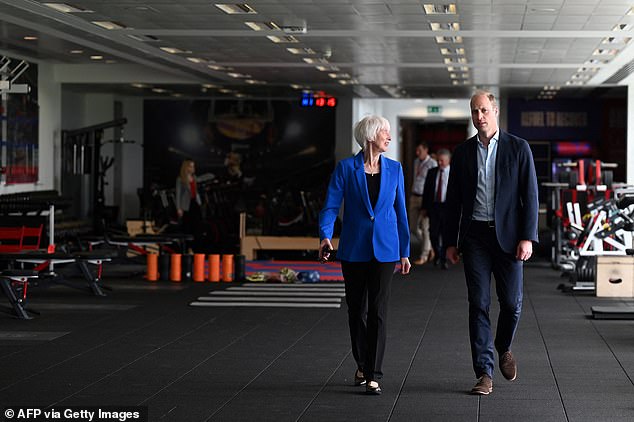 The Duke opted for a smart navy suit for the outing today, which he paired with a light blue shirt and brown shoes

Ingrid Seward, editor-in-chief of Majesty Magazine, said: ‘The Queen needs more people like William around her.

‘She is very often on her own apart from staff and so will be delighted William, Kate and her three great-grandchildren will be ten minutes away. The family were very restricted in what they could do during the week at Kensington Palace.’

Sources close to the family suggest the Cambridges were keen to be closer to the Queen, 96, who has suffered episodic mobility issues in recent months and also secure a good school for their three children.

George, eight, Charlotte, seven and Louis, four, will be pulled out of their current prep school in Battersea and are all expected to start school locally when the new academic term begins in September. 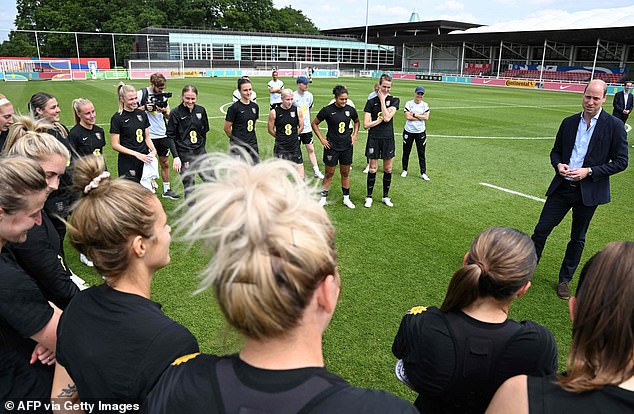 After the tour of the facilities, the Duke chatted with the athletes who were waiting on the pitch 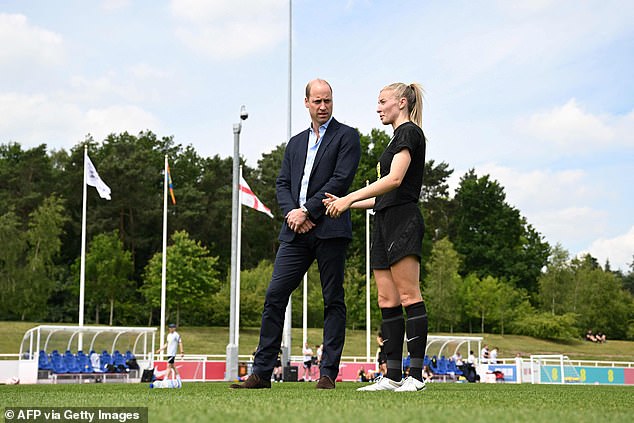 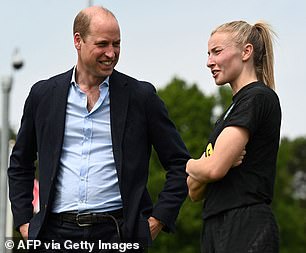 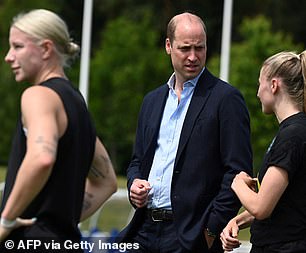 The royal, who is an enthusiastic football fan, appeared to be in good spirits as he chatted with Leah 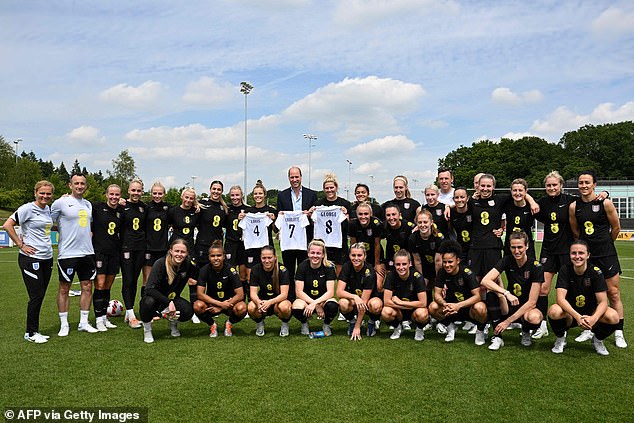 Later, the Duke posed for a snap with the England women’s football team, holding up the gifts for Prince George, Princess Charlotte and Prince Louis

The move also represents a fresh start for the senior royals and their five-strong famil as they continue to cement their place among the most influential members of The Firm.

One source told the Sun: ‘Kate and William were very keen for a modest home to start their new lives in Windsor. Adelaide Cottage fits the bill because it is a four-bedroom home and they do not need any more as they have no live-in staff.

‘They had no other demands than a pleasant family home close to schools and the Queen.

‘They were adamant they didn’t want anything too showy or anything that needed renovating or extra security so as not to be a burden on the taxpayer.’ 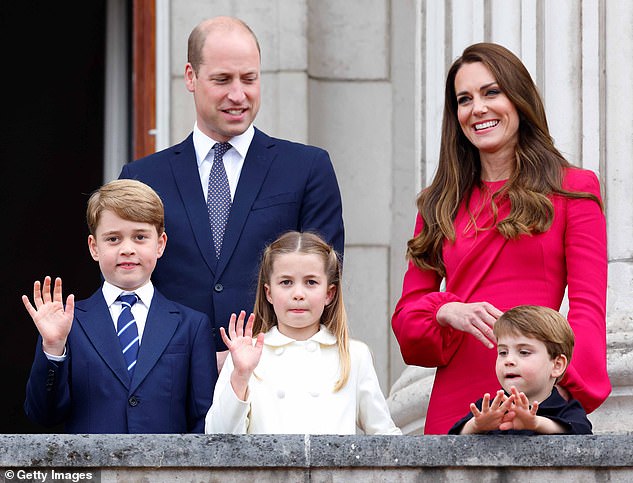 The Duke and Duchess of Cambridge, are reportedly set to uproot their family from Kensington, west London, to Adelaide Cottage in Berkshire in order to be closer to the Queen