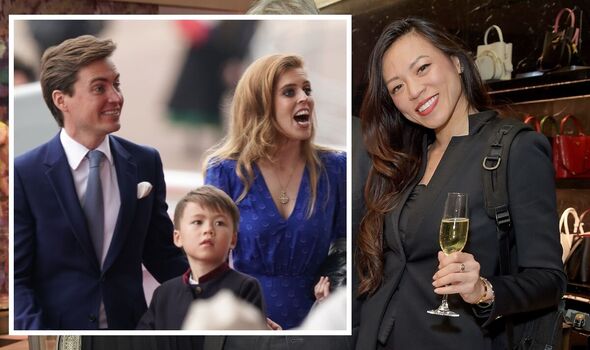 Christopher Woolf Mapelli Mozzi is better known by his nickname Wolfie. He is the six-year-old son of Edoardo Mapelli Mozzi from his relationship with US-born architect Dara Huang. He is also Princess Beatrice’s stepson and has been lovingly referred to as her “bonus son”.

Wolfie’s mother recently spoke about her young son on social media and expressed her thoughts on why she is so pleased he is educated in the UK, rather than in her native USA.

Christopher was born in 2016 and is the son of Edoardo Mapelli Mozzi and American architect, Dara Huang.

He was recently pictured with his father and stepmother, Princess Beatrice, at the Christmas Day service in Sandringham.

While very little is known about Wolfie, his mother recently expressed her gratitude for her son being educated in the UK, rather than in the USA.

Writing on social media, the Florida-born architect said: “I’m glad my son doesn’t go to school in the USA. I can sleep at night knowing he won’t die at his desk tomorrow morning.”

At least 1,500 children were killed in gun-related incidents in the USA last year, with more than 600 mass shootings across the states.

She made the comments after returning back to the US for the festive season while her son remained in the UK and spent Christmas with the Royal Family.

Dara continued: “Not to get all political here, but I went to a sports store in the US to buy tennis shoes today and couldn’t help but notice this huge gun section – post-Xmas sale.

“And he said, ‘No, you can buy one right now and either take it in two days or take a $50 two-hour ‘conceal and carry course’ and bring it home right now’.

“And I said, ‘OK, so no licence needed, medical records, history of felony?’

“Literally anybody can buy the most dangerous weapon known to man.”

Dara and Edoardo were engaged until 2018 but decided to call off their relationship.

Edoardo started his relationship with his family friend Princess Beatrice in the same year and the pair announced their engagement following a trip to Italy in September 2019.

The couple were initially set to marry at St James’s Palace in the Chapel Royal but were forced to postpone due to the coronavirus pandemic.

They ultimately married in a private ceremony on July 17, 2020, at the Royal Chapel of All Saints in Windsor Great Park.

While the ceremony was a scaled-back affair, it was later shared that Wolfie served as a page boy and acted as his father’s best man during the service.

Wolfie is rarely seen in public and his parents often guard his identity when they post pictures on social media.

While this may be the case, the youngster was spotted sitting in the royal box with his dad and stepmother at the late Queen’s Platinum Jubilee in June.