Raging against the dying of the American dream

DEATH OF A SALESMAN
Roslyn Packer Theatre, November 8
Until December 22
★★★★

Arthur Miller toyed with calling his great play The Inside of His Head, and, where some productions reduce the work’s suppurating theatricality to base naturalism, Paige Rattray’s Sydney Theatre Company version forces us to soil our hands in the contents of Willy Loman’s cranium. The title tells us Willy never stood a chance. More than just puncturing the American dream, Miller’s play goes after the whole fallacious promise of capitalism, a system that roars ever louder in our ears thanks to Bezos, Zuckerberg and the rest. 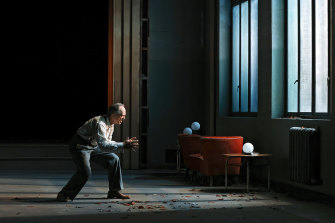 Jacek Koman is compelling when taking Willy on his mad dances with illusion.Credit:Prudence Upton

Willy had the dream; even understood that lying and cheating were intrinsic to the game, but thought wealth would cleanse all ethical qualms. That doesn’t make Willy evil; just a sucker. Yet in playing him, he has to be a sucker with dignity, and Jacek Koman gives him that in a fine, if flawed, performance.

He gives him the swollen pride that prevents his accepting a job from his neighbour, Charley (a convincingly eccentric Bruce Spence), even when he’s been fired; pride whereby he partly chooses to ignore his sons’ worthlessness, whether measured by bank balances or a two-dollar moral compass. Koman is also compelling when taking Willy on his mad dances with illusion, as memories strangle his fragile hold on reality – which Miller exquisitely referred to as the past and present being “syncopated”.

What Koman couldn’t quite bequeath us was Willy’s heart-rending pathos: the travelling salesman who, having ridden on “a smile and a shoeshine”, stops being able to sell, and decides the only way to dig himself out of this hole – rather than drag his wife and sons in – is to cash in his life insurance. Koman makes us sympathise with Willy, but doesn’t make us mourn him. 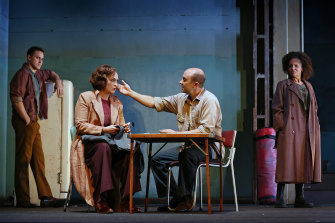 Helen Thomson’s affecting performance as his wife, Linda, does that for us. She understands the heroism of grubbing out a daily living against the odds. She loves Willy to death; loves him maternally more than their sons; loves him enough to blind herself to his infidelities and his withering rudeness.

As forgiving as a saint, she champions Willy like some medieval warrior, her weapon being a darning needle rather than a lance, and Rattray gives Koman and Thomson a beautiful physical exchange when Linda tries to help Willy with his jacket, and his thoughts keep taking him out of her reach. Although Linda knows her sons, Biff (Josh McConville) and Hap (Callan Colley) for what they are, she doesn’t know Willy made them that way by putting them on the same ladder he could never climb himself.

Rattray’s casting of McConville is a masterstroke. All trace of the athlete once idolised at school has been erased by a wasted life. This is an older, world-weary Biff, who convincingly pivots at the end to be the only family member who sees through the “phoney dream” they’ve all been living, and McConville’s vivid performance, as much as Thomson’s, compensates for Koman’s just missing spearing us on the tip of his anguish. Hap is too dim to do more than scrape away at surfaces as he yearns to win an unwinnable war: a philanderer to Biff’s kleptomaniac. Both Colley and McConville excel when playing their characters’ much younger selves in Willie’s memory.

Like capitalism, the decaying enormity of David Fleischer’s set dwarfs these people. Rattray’s having her cast watch the action and Brigid Zengeni read the stage directions seemed an intrusion at first, but actually layers ritual into our participation in the merciless trepanning of Willy Loman.

TV, movies, Find out the next TV, streaming series and movies to add to your must-sees. Get The Watchlist delivered every Thursday.