Relationship experts reveals how you can forgive someone who's cheated

How to forgive your cheating partner: As Coleen Rooney reveals husband’s Wayne’s past behaviour was ‘unacceptable’ psychologist explains how allowing yourself to feel angry is the secret to a happy relationship

A relationship expert has revealed how to forgive a partner who has cheated on you, after Coleen Rooney publicly addressed her husband Wayne’s rumoured affairs and flings for the first time.

The footballer’s wife, 35, who has been in a relationship with the former England captain for 19 years said in a teaser for a fly-on-the-wall Amazon Prime documentary airing next year, that his behaviour hadn’t been ‘acceptable’ but that she ‘had forgiven him.’

Dr Carmen Harra and her daughter Alexandra, authors of Committed: Finding Love and Loyalty Through the Seven Archetypes  revealed how people who have been cheated on or wronged by their partners but who wish to forgive can do so.

They advised on how to avoid getting ‘stuck’ in hurtful memories and how allowing yourself to feel angry is actually the best way to find your inner calm, take control of your life and forgive your partner if this is what you want or your future.

‘If you’re living in the past, tomorrow will look a lot like yesterday: the same things will follow you into the next room if you don’t close the door behind you,’ Dr Harra said.

‘The truth is that we’re all “stuck” in something: a hurtful memory, a false belief, a trauma, a bad breakup, or an old argument.

‘If you feel stagnant or dissatisfied in any way, chances are your past is still intruding on your present. You deserve to welcome your future with open arms and without restraints’. 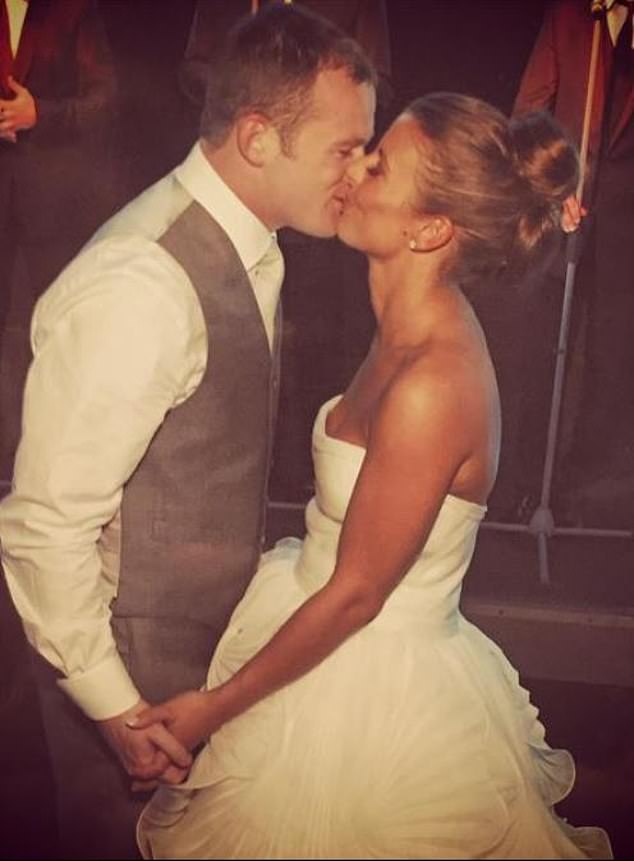 Wayne and Coleen met at 12, dated at 16 and married at 22. In 2004, reports surfaced that the footballer had been caught exiting a brothel. Several similar rumours have circulated since 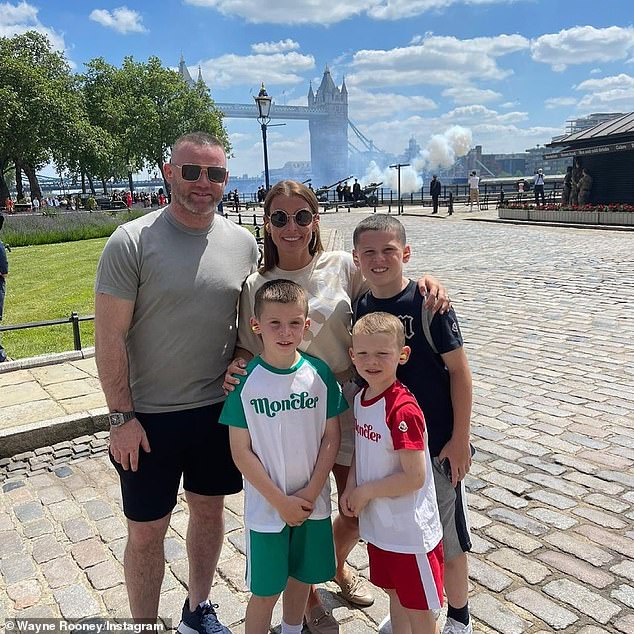 The couple have four boys, with the oldest, Kai, 11, Klay, eight Kit, five, pictured here. Their youngest, Cass, was born in 2018 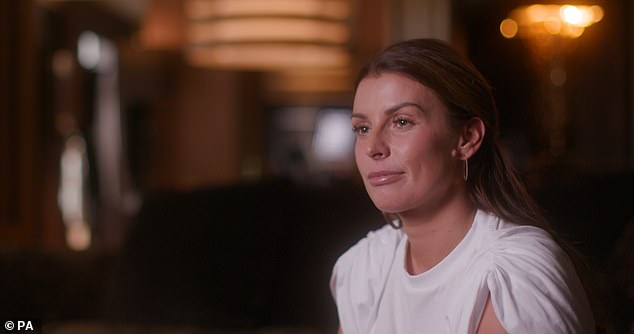 Coleen Rooney, pictured, has opened up about her husband’s rumoured affairs for the first time in a teaser for a fly-on-the-wall documentary set to air on Amazon Prime next year.  Relationship experts told FEMAIL how forgiving is possible

The professional added that while people often say that ‘time heals all wounds,’ some particular wounds leave deeper scars and need more work.

‘Does trauma from the past continue to interfere in your present? Do the effects of a former betrayal creep into your relationship today? You must let things go in order for them to come to an end,’ Dr Harra said.

‘You have to do it, not time—time won’t do anything for you except push the memory further down into your subconscious. If you continue to hold onto something, even if it happened fifty years ago, it’s still very much alive for you: if it’s still present in your heart, it will continue to be present in your life.

The psychologist added that forgiving was possible, as long as you pinpoint the reason why you’re doing it, such as being the bigger person, wanting to lead by example, or saving your relationship.

‘It’s not easy to tolerate the intensity of raw emotions, but a bit of emotional release each day eventually leads to progress. There are several effective strategies to surrender negative emotions and detach,’ they said.

GET ANGRY, BUT DON’T LET THEM RULE YOU

Dr Harra and Alexandra said getting a handle of your emotions was key to move on.

‘Allow yourself to feel angry and resentful that you’ve suffered a terrible loss, within limits,’ Dr Harra explained.

‘Don’t temper your emotions but do express them without letting them overtake you for hours or days. If you need a good cry, hop in the shower and cry for ten minutes,’ they added.

‘Write three pages in your journal, filling it with your emotions even as your tears fall on the page, then close it for the day. Take a walk in nature in a secluded area and let everything out while you’re there, then take a steadying breath as you exit the path and go back home,’ Dr Harra.

The psychologist added the key was not to hold back your feelings, but to contain them to some activities so that you rule them and they don’t rule you.

‘When you put limits on your grief, you’re not grieving constantly, which allows you experience more positive emotions that enrich you with hope,’ they said 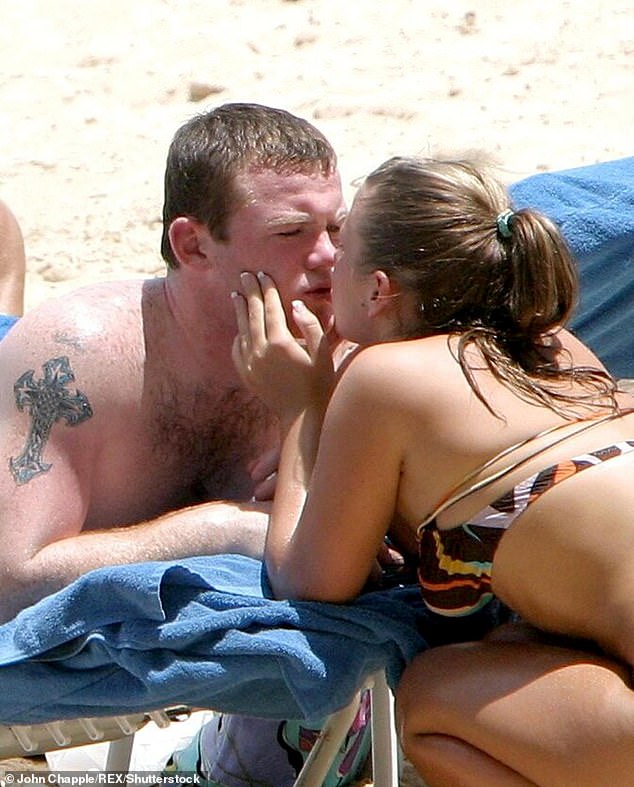 Coleen and Wayne have been together since they were 16, and have stuck together throughout their 19-year-long relationship (pictured in 2004)

Dr Harra and Alexandra said keeping a journal, written by hand and not on a computer, is a great way to process your feelings.

‘This allows you to access your emotions and find an outlet for them. Don’t be afraid to cry while journaling. Crying energetically releases emotions,’ Dr Harra said.

‘If you’re embarrassed to cry in front of others, make it a point to be alone during the times you journal so you can allow the tears to flow. Bear in mind that unlike just speaking or thinking, writing down your emotions makes them tangible.’

They added that this writing process allows you to acknowledge your feelings and to revisit them later when you feel strong, to congratulate yourself.

RELY ON YOUR SUPPORT SYSTEM

‘Spend time with whomever offers you moral support and makes you feel comfortable expressing your emotions or engaging in activities you enjoy,’ Dr Harra went on.

‘You might find that your strongest allies at this time are best friends or family members,’ they said.

The pair added that you could also rely on people who had come to your life recently, such as therapy group.

‘Stick closely with those who can boost your strength and vitality and don’t be afraid to call on people who can show you unconditional love and patience in a time when you need compassion above all else,’ they said.

‘By surrounding yourself with supportive people, you make it easier for yourself to take a leap of faith in your future,’ they added. 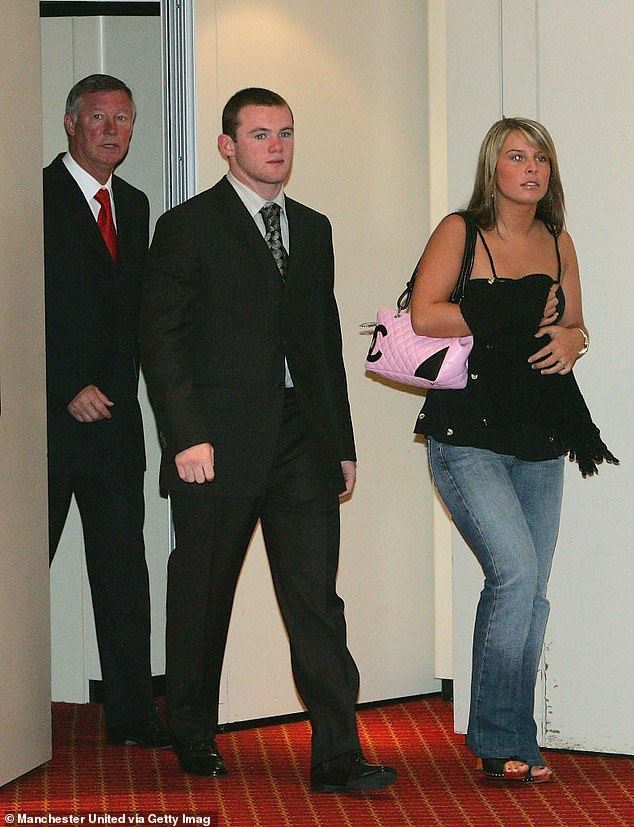 Coleen and Wayne at a 2004 conference to announced his Manchester United signing. That same year, rumours of infidelity started to emerge

‘We frequently recommend reciting affirmations to our clients to steady their emotions and move forward,’  the psychologist added.

‘Affirmations engage the art of the spoken word to your advantage. You can reaffirm your strength and worth throughout the day by repeating things like, “Through this hard time, I learned and evolved,” “‘I have the power to turn any setback into a victory,’ “and “Determination and ambition surge through me’,'”

‘When you speak affirmations, allow yourself to feel them fully. Say them until you can say them with conviction. It can take a few repetitions to create optimistic feelings, but when you do, you shift your vibration and send a message to the universe that you’re ready for these statements to be true not just in your mind, but in your life’ Dr Harra said.

In order to forgive someone that’s wronged you, it is important to feel detached, Dr Harra said.

‘Detachment means letting go of what no longer serves you,’ they explained.

‘Detachment must happen physically, mentally, and emotionally and it must be performed on the levels of mind, body, and spirit in order to become genuine and permanent’. 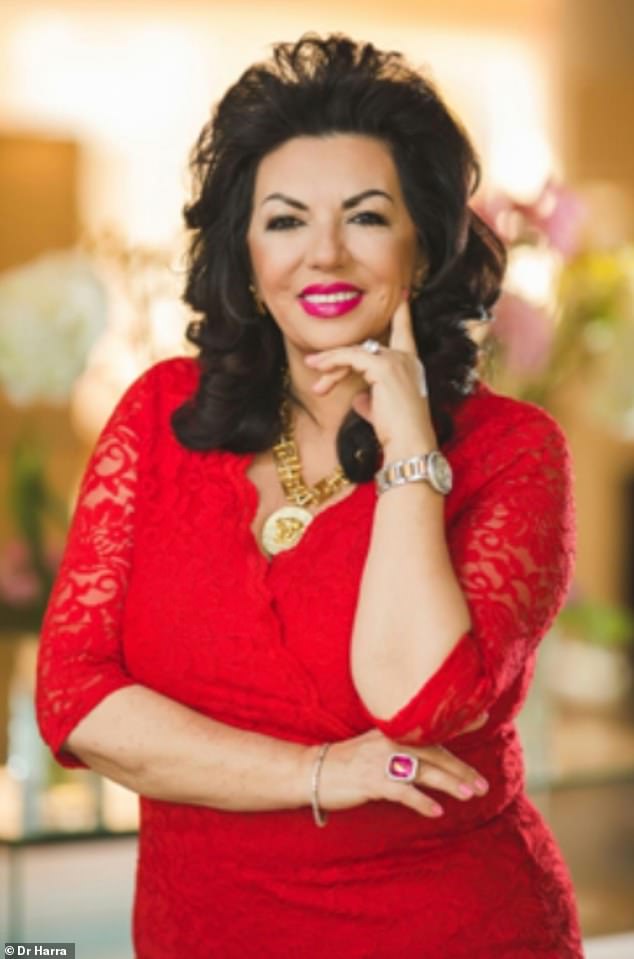 Dr Carmen Harra, pictured and her daughter Alexandra, authors of Committed: Finding Love and Loyalty Through the Seven Archetypes

PUT YOURSELF IN THEIR SHOES

Putting yourself in your partner’s shoes could be one way of forgiving their wrong-doings.

‘In order to forgive, you have to put yourself in the other person’s shoes, as hard as that may be to do. Forget about your argument, valid as it is, and think about how the other person rationalizes their thoughts, words, and actions,’ Dr Harra said.

‘Can you see why he or she acted in a certain way or said certain things,’ they asked.

The authors advised practicing mindfulness in order to reshape your reality.

‘Close your eyes and inhale deeply, feeling your core fill up with fresh air. Hold your breath for a few seconds then exhale slowly,’ the pair explained.

‘As you exhale, imagine any dark, pent-up energy being released from your being. Affirm to yourself: “I am letting go of old memories that have held me back from my true potential” and “I welcome endless possibilities into my life’,”

”This breathing exercise is one of the many rituals you can repeat each day to drive out stagnancy and clear the path ahead.’

The experts explained we are usually not aware of the subconscious traumas that people carry with them.

As bad as their action feels, it is easier to forgive someone if you accept they are motivated by conflicts and complexes you don’t understand.

A change of scenery, and breaking old habits is a good way to start afresh and forgive, the relationship experts said.

‘Don’t be afraid to undertake the improvements you’ve been putting off: move to a new location, go back to school, look for a better job, find different friends, finish your project, and so on,’ they said.

‘There’s no better feeling than a shift in scenery and environment! Staying in the same circumstances will cause you to regress continually to the past. But seeking fresh possibilities and hopeful opportunities will teach you to look forward,’ they added.

FOCUS ON THE POSITIVE

Finally, they advise that keeping a positive mindset will influence the course of your life, because you are the ‘co-creator of your life.’

‘Do this by remembering what went right, not wrong. You may have gone through a bad relationship, but you managed to come out unharmed,’ they said.

‘Obsessing over negativity creates a disproportion in your thoughts, placing emphasis on heavy, fearful ones.

‘Remind yourself of all the times you were divinely protected and spared from something truly bad. This will break the pattern of reverting to the past,’ they added.