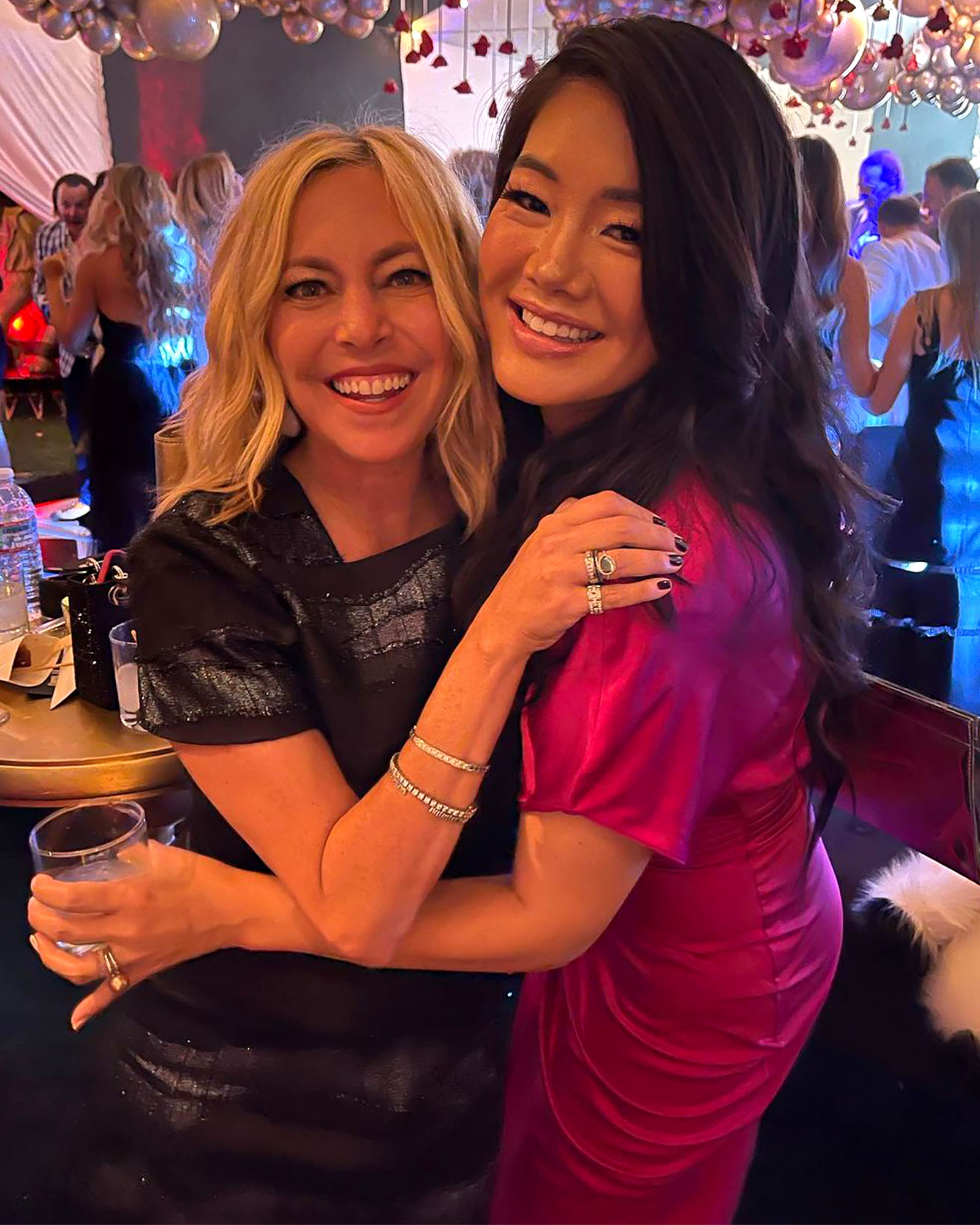 Showing them how it’s done! After a rocky start to their friendship during season 11 of The Real Housewives of Beverly Hills, Sutton Stracke and Crystal Minkoff have finally buried the hatchet and are starting fresh.

“Miracles do happen! 😽💗 Such fun at Portia’s Bat Mitzvah! Thank you @kylerichards18 for including me💗,” Sutton, 50, captioned a photo on Monday, October 4, of her and Crystal, 36, recently spending time together at Kyle Richards‘ daughter’s party. Crystal posted the same photo via Instagram with the caption, “Two for the road ♥️♥️.”

Sutton and Crystal’s friendly reunion comes after they struggled to get on the same page while filming the Bravo series together. During a May episode of RHOBH, the costars found themselves at odds when Crystal attempted to weigh in on a conversation about racial stereotypes.

As the Real Coco founder, who is the first Asian-American Housewife on the reality series, started to make a point about how “painful” stereotypes can be, she was interrupted by the Georgia native.

Following the episode, Sutton took to social media to apologize for not allowing Crystal to speak.

“Despite Crystal and my strained relationship at the time, it was disrespectful to interrupt her and not listen to her express her truth,” Sutton wrote via Instagram in May. “My life is blessed by the diversity of my relationships and I am committed to become a better listener to understand the painful realities experienced by people of color.

At the time, Crystal replied to the post, commenting, “Thank you, Sutton. Your apology means a lot to me, and I’m sure it means a lot to many others with similar lived experiences.”

She added: “Asian Americans are often expected not to share their opinions, but despite this stereotype, I believe that everyone deserves to be heard. I consciously re-wired myself to be outspoken and share my feelings whenever possible and I encourage my children to do the same.”

Three months later, Sutton admitted that watching back her conversations with Crystal made her see the situation between them very differently.

“Now, I’ve watched it a couple of times and, you know, I just should’ve been quiet. I was talking and I interrupted her and I shouldn’t have done it,” she said on the “Behind the Velvet Rope with David Yontef” podcast in August. “And even the next morning, I still kept talking and I just needed to be quiet and just listen, because what she was saying, I completely agree with. And I just should have let her say it.”

Crystal, for her part, recently reflected on how being “cordial” led her and her costar to a more peaceful place even if not everything was forgiven right away.

‘Real Housewives of Beverly Hills’ Season 11 Reunion: Everything We Know

“That’s how Sutton and I got to a good place. You just have to sort of put a band-aid on it and it’s not about being fake. It’s, like, it’s stopping the bleeding essentially,” the California exclusively shared with Us Weekly late last month. “Then you can start to develop something positively, but you can’t expect to go from zero to 60. It’s unrealistic.”

That same month, Sutton noted to Us the big lesson that came from the misunderstanding.

“Looking back at the whole season, I had the one regret with Crystal and not listening. That was really hard to watch. But in a way now it’s not become a regret because it’s this opportunity to sort of show people, like, we all need to listen,” she added. “So then it becomes not a regret.”

The Real Housewives of Beverly Hills airs on Bravo Wednesdays at 8 p.m. ET.