Richard Branson, the billionaire founder of Virgin Galactic, will fly into space aboard his company’s VSS Unity rocketplane on July 11 for an up-and-down test flight, beating Amazon-founder and rival Jeff Bezos into sub-orbital space by nine days.

The announcement from Virgin came just a few hours after Bezos announced that aviation pioneer Wally Funk will be joining him, his brother Mark and the yet-to-be named winner of an online auction for blastoff July 20 aboard his company’s New Shepard spacecraft.

Both Virgin Galactic and Bezos’ Blue Origin are competing head-to-head in the emerging space tourism marketplace, both offering short rides just above the discernible atmosphere for a few minutes of weightlessness and spectacular views before returning to Earth. 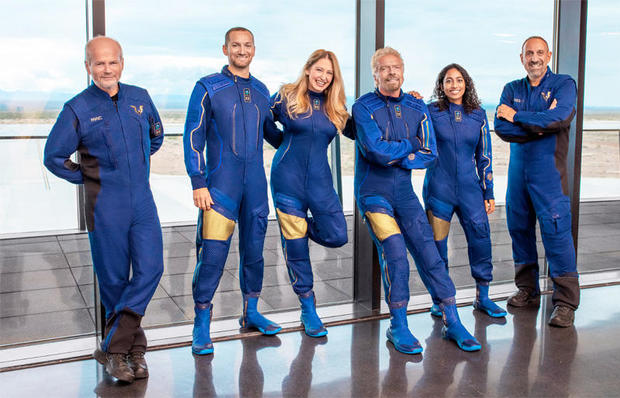 Along with wealthy space tourists, both companies expect to fly researchers and experiments from government agencies and companies developing or testing space technology.

Neither company has said how much it plans to charge for a ride to space, but tickets are expected to cost between $250,000 and $500,000. Even so, some 600 enthusiasts have put down deposits with Virgin for flights once commercial operations begin in 2022. In after-hours trading the company’s stock was up 25%.

Blue Origin has carried out 15 unpiloted test flights of its New Shepard rocket and capsule and announced on May 5 that its first flight with passengers on board would take off on July 20, the 52nd anniversary of the Apollo 11 moon landing.

One month later, on June 7, Bezos announced that he and his brother would be aboard along with the as-yet-unidentified winner of the online auction, whose $28 million bid won a seat on the New Shepard capsule. Funk will round out the four-person crew.

It appeared Bezos was on track to win the billionaire race to space, but the Federal Aviation Administration recently gave Virgin permission to carry passengers on its next test flight, fueling speculation Branson would be aboard to beat Bezos to the punch.

“I truly believe that space belongs to all of us,” Branson said in a statement Thursday. “After more than 16 years of research, engineering and testing, Virgin Galactic stands at the vanguard of a new commercial space industry, which is set to open space to humankind and change the world for good.”

He said he was “honored to help validate the journey our future astronauts will undertake and ensure we deliver the unique customer experience people expect from Virgin.”

Mackay flew two earlier sub-orbital test flights while Masucci and Moses each have one previous flight to their credits. 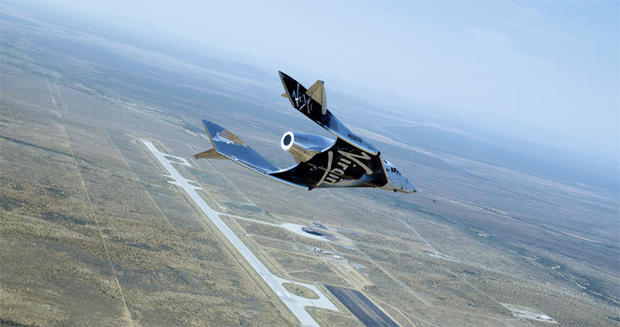 The upcoming flight will be Virgin’s fourth piloted spaceflight, all of them test missions, and the 22nd flight of VSS Unity overall.

While Virgin Galactic and Blue Origin both plan to offer rides to sub-orbital space, the companies chose very different approaches to the challenge of safely launching passengers to altitudes above 50 miles, the somewhat arbitrary “boundary” of space.

A smaller two-man version of the spacecraft won the $10 million Ansari X-prize in 2004, completing two trips to space and back within two weeks. Branson purchased rights to the design and scaled it up to carry a crew of six.

Unlike the New Shepard capsule, which launches from Earth and is then released from it booster for a short sojourn in space, Virgin Galactic’s spaceplane is carried aloft by a twin-fuselage carrier jet and then released above 40,000 feet for a quick rocket-powered ascent. The craft then glides back to Earth for a runway landing.

Both spacecraft offer the same brief period of weightlessness and while Virgin’s passengers will enjoy a longer flight overall than the New Shepard’s 10-minute missions, Blue Origin’s capsule offers the biggest windows ever built into a spacecraft, along with a “full envelope” abort system to safely propel the craft away from a malfunctioning booster.

An earlier Virgin spaceplane, the VSS Enterprise, suffered a catastrophic failure during a test flight in 2014 that killed one of the two pilots on board. The mishap was blamed on pilot error, and changes were made to prevent any chance of a recurrence.