A touching homage to Diana, not just a photo opportunity: As Harry follows in his mother’s footsteps in Angola, ROBERT HARDMAN says the prince is carrying out her unfinished business on landmines

For all the careful choreography in front of the cameras yesterday, this was not a photo opportunity. It was a homage. The Duke of Sussex had come to Angola to pay tribute to one of his late mother’s most enduring achievements: tipping the balance in favour of a worldwide ban on landmines.

‘It has been an honour to retrace my mother’s steps today,’ he said, touring the town where she first drew global attention to this issue in 1997. ‘I lost her 22 years ago, but the memory of her is with me daily and her legacy lives on.’

Today, we tend to forget just how controversial it was when Diana, Princess of Wales entered the landmine debate. 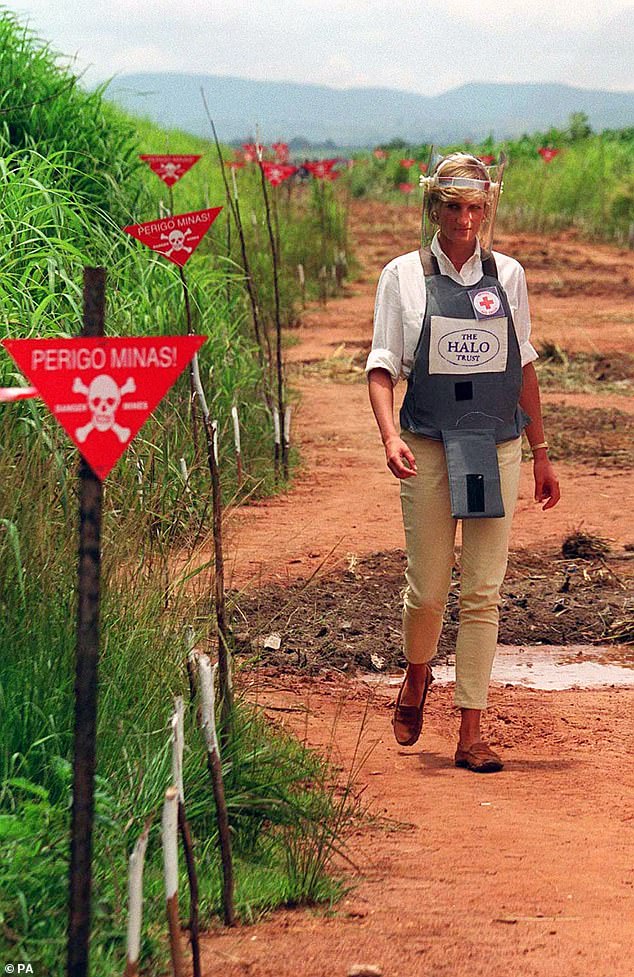 Diana, Princess of Wales wearing a bombproof visor and treading carefully through the ‘perigo minas’ signs during her visit to a minefield in Huambo, Angola

Newly-divorced and embracing fresh challenges as a non-royal Princess, she was horrified by the damage which these weapons were inflicting on civilians, especially children, long after any war was over. However, there were critics within the UK military establishment dismayed by her intervention, arguing that Britain could hardly jettison its landmines as long as our potential enemies had their own.

One defence minister called Diana ‘a loose cannon’. The British ambassador to Angola even made a formal complaint to the Foreign Office, urging ministers to keep the Princess away (he was overruled). Yet the subsequent images of Diana in flak jacket and visor, treading carefully through the ‘perigo minas’ signs of Huambo before meeting mutilated children, were a game-changer. The international momentum shifted swiftly and irreversibly.

Months later, Diana was off on an identical mission to the minefields of Bosnia. By the end of the year, 122 nations had signed a pledge to outlaw these instruments of war. And on December 10, it was announced in Oslo that the 1997 Nobel Peace Prize would go to the international campaign to ban landmines. Diana would have been the first to admit that she was just one of countless supporters of this crusade, albeit by far the most famous. But, by then, she was dead, killed a few months earlier in a Paris car crash. 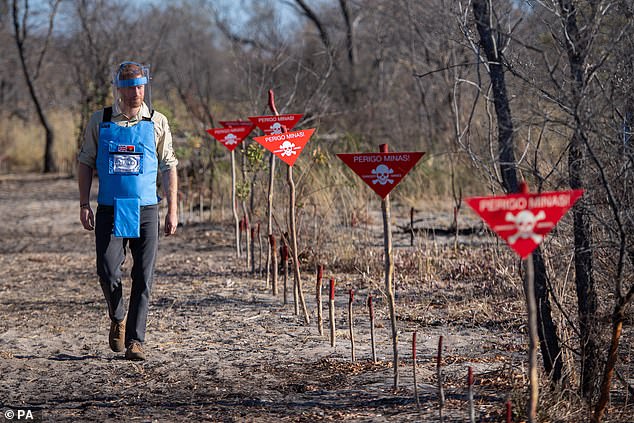 The Duke of Sussex walks through a minefield in Dirico, Angola, on day five of the royal tour of Africa

Yesterday was, clearly, a case of unfinished business for her proud younger son. As he wrote on Instagram, he had come ‘to recognise her tireless mission as an advocate for all those she felt needed her voice the most, even if the issue was not universally popular.’ It certainly wasn’t then.

But, as Harry walked down Huambo’s Princess Diana Street and opened the new Princess Diana clinic yesterday, who would quarrel with her now? There have been many echoes of Harry’s father, too, on this tour. Thursday’s forestry engagements with the Queen’s Commonwealth Canopy in Botswana were firmly focused on the environment and the threat from climate change, issues which the Prince of Wales has been drumming in to his sons since childhood. ‘I don’t believe that there’s anybody in this world that can deny undeniable science and facts that have been around for the last 30, maybe 40 years,’ said an exasperated Harry, sounding very much like his father.

The sense of deja-vu throughout this tour extends far beyond landmines and tree-plantings. The Duchess’s visit to a Cape Town mosque this week, where Meghan wore a white silk headscarf, immediately evoked memories of Diana’s tours of Egypt, Pakistan and elsewhere. 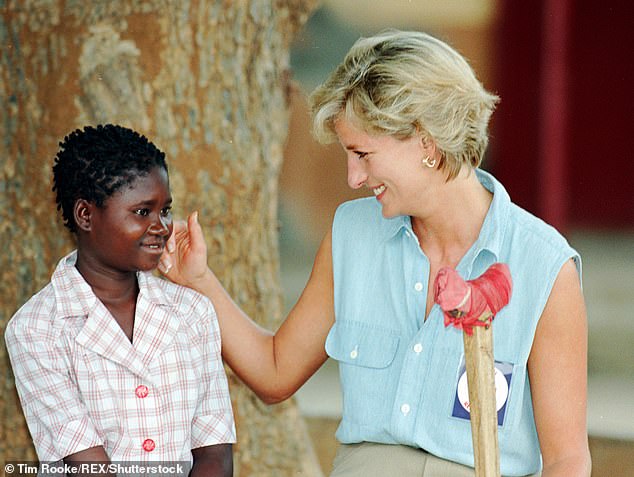 Princess Diana with Sandra Tigica, 13, a landmine victim who she met at the Orthopaedic Workshop, in Angola, 1997

The presence of baby Archie on this tour is also a reminder of when Harry would join his parents on official tours. Archie’s appearance at this week’s tea party given by the former Archbishop of Cape Town, Desmond Tutu, will have delighted the Queen. Here was her great-grandson meeting an heroic churchman whom she has known and admired for years (eventually making him an honorary Companion of Honour).

South Africa was the very first foreign destination for the Queen herself. And her arrival in Cape Town with her parents in 1947 marked the start of a lifelong love of Africa.

This week and next, Harry and Meghan are visiting several projects bearing her name.

For Harry there will be powerful memories on this trip. As he recalled this week, he came to southern Africa as a schoolboy just weeks after walking behind his mother’s coffin in the late summer of 1997. 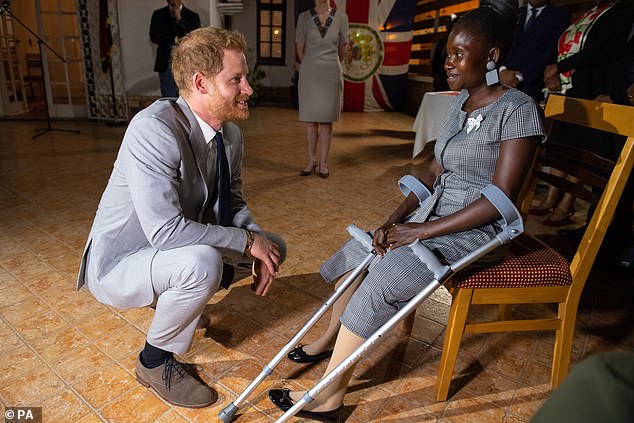 The Duke of Sussex meets landmine victim, Sandra Tigica, who Princess Diana met on her visit to Angola in 1997

The Prince of Wales, committed to a three-nation tour of the region that autumn, took Harry with him. There were memorable meetings with Nelson Mandela and a lively encounter with the Spice Girls in Johannesburg. But there were also private father-and-son retreats to the bush which Harry valued greatly.

‘I came here in ’97 – straight after my mum died,’ Harry said this week. ‘It was a nice place to get away from it all. But now I feel deeply connected to this place.’ This morning, he will meet Angola’s president before heading to Malawi. Meghan, who remains in Cape Town with Archie, will prepare for a series of engagements in Johannesburg.

Whatever the news back home, this tour is certainly a reminder of the international pulling power of British royalty at a time when the UK has precious little else in the diplomatic toolbox.