With the possible exception of Queen Boadicea, Joan of Arc and Elizabeth I are two of the most kick-ass women in history.

Both distinguished themselves in a male-dominated world – Joan in battle and Elizabeth as a Monarch at a time when women had very few rights save those afforded them by their husbands or fathers.

Queen Bess famously professed to have ‘the body of a weak and feeble woman but the heart and stomach of a king’. No man ever met her standards for marriage, and she remained – or at least so she claimed – a virgin until her death.

Likewise Joan, who even underwent an examination to prove herself truly the ‘Maid of Orléans’. Perhaps things would have been different had she not been burnt at the stake at the age of 19. By men, of course.

For generations, their stories have captured the imaginations of young girls and women. Both represent something important, something inspiring: the notion that a woman can be every bit equal to a man in her scope and ambition, that womanhood is not a permanent state of weakness or victimhood, that women can determine their own destinies, even if it doesn’t always go quite according to plan. 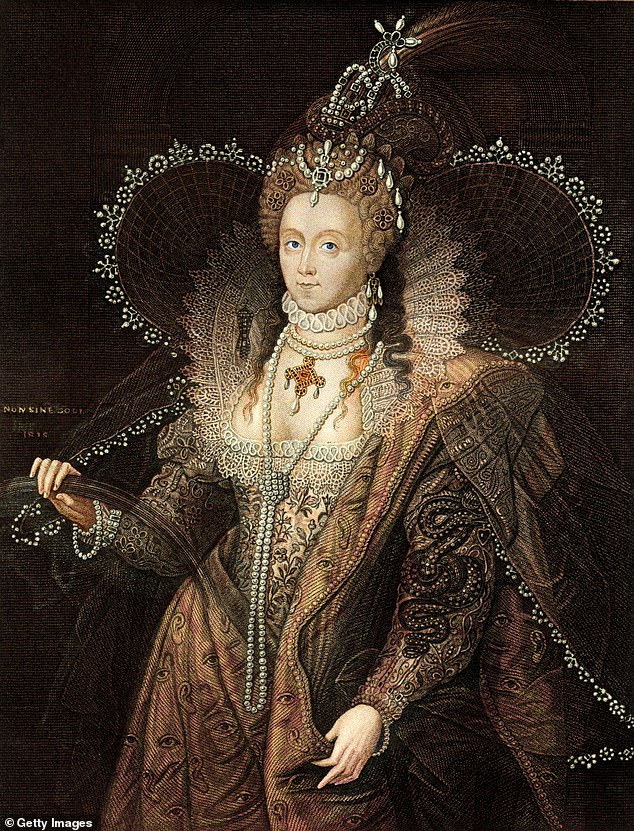 With the possible exception of Queen Boadicea, Joan of Arc and Elizabeth I (pictured) are two of the most kick-ass women in history

Their gender is a vitally important part of this. It’s what makes them feminist icons. Take that away and you dilute their power.

What makes Joan of Arc and Elizabeth I remarkable is that they were women – that is to say, human biological females – doing these things at a time when women weren’t supposed to do anything more than cater to the needs of their menfolk, produce babies and perhaps the odd bit of tapestry.

That is why the decision by the Globe Theatre to re-cast first Joan as ‘non-binary’ (on stage), then Elizabeth (in an essay defending the previous decision), offends so many feminists, including J.K. Rowling.

Of course the Globe is an artistic venue, and art is freedom of expression, which is an important right that must be protected, particularly in the light of the heinous attack on Salman Rushdie.

But to say that anybody who objects to the narrative of these new interpretations is ‘denying the historical existence of the trans experience’, as the author of the essay, one Dr Kit Heyam, has claimed, is disingenuous.

It’s really not about that (I certainly don’t want to deny any trans person their experience, historical or otherwise).

It’s to do with the fact that the identity of these two women – as bold, brave females in a male-dominated world, and therefore uniquely inspiring – is being questioned for no other reason than to feed a particular narrative.

Which is that because they acted like men, because they demonstrated characteristics most commonly associated with men, they cannot have been women. How sexist is that? Not only sexist, but it is also hypocritical. Because Joan and Elizabeth are, in effect, being misgendered – something that many in the trans community suffer and find deeply distressing, quite understandably.

Throughout history, strong women have been forced to take on the mantle of men because misogyny has required it. That is why Joan dressed as a man: it was the only way she could possibly be taken seriously. 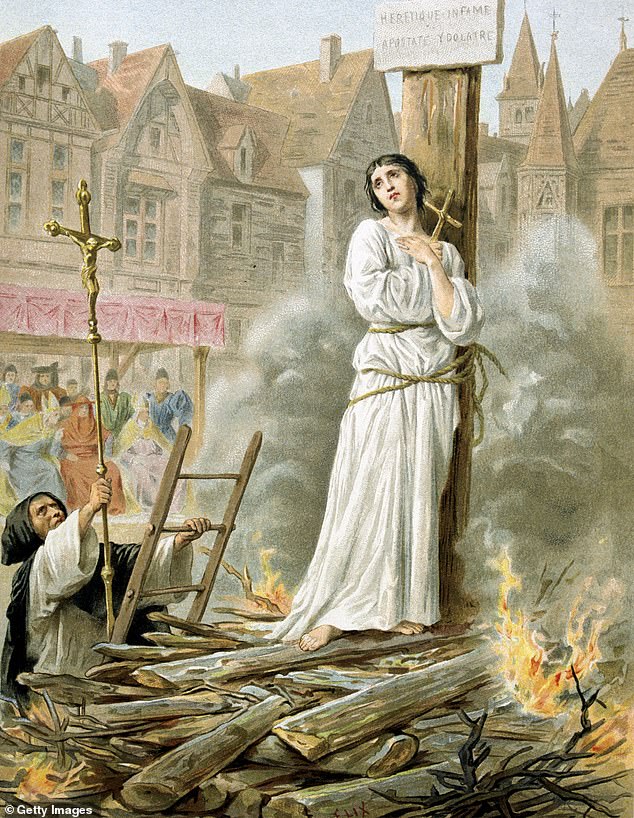 That is why the decision by the Globe Theatre to re-cast first Joan as ‘non-binary’ (on stage), then Elizabeth (in an essay defending the previous decision), offends so many feminists, including J.K. Rowling

They all faced anti-woman prejudice, and they got around it as best they could.

All the Globe Theatre is doing is repeating and perpetuating that prejudice. It is saying that neither Joan nor Elizabeth could have done what they did unless they were secretly male, or possessed male characteristics.

In doing so, they are denying the pair their identities as strong, brave women. Can’t they see how insulting to women this is? How it attempts to deny us the few crumbs of history we can call our own?

Joan of Arc knew what she was, as did Elizabeth I. They both led lives of conviction and courage, and they led them as women.

For that, they are remembered, respected and even revered.

Let’s just leave it at that.

Historian Lady Antonia Fraser spoke for us all when she said of the Duchess of Sussex: ‘I just wish vainly she’d shut up.’ Hope springs eternal, Dame Antonia.

We all need a holiday: even MPs!

Every summer it’s the same story: why is such-and-such politician on holiday when the country is in a mess? This year, both Sir Keir Starmer and Boris Johnson have been rebuked for daring to take a family break.

Such criticism is idiotic. First, because the country is always in some kind of mess, so there’s never a good time to go away. Second, politicians ought to be firing on all cylinders, not worn out and exhausted. But perhaps most importantly, holidays allow us to see life from a different perspective.

And that, in the blinkered world of Westminster, is never a bad thing.

Why does the Government propose to give every household £400 towards fuel costs? For someone like, say, Jerry Hall – who’s reportedly got about £250million from her divorce – £400 is probably what she spends weekly on flowers. For a pensioner, it could be the difference between life and death. Why not target the money based on income – giving more to those who need it most?

There’s much talk of a ‘return to the Seventies’. I remember those times, as a youngster. It was quite exciting to do things by candlelight and it didn’t matter that we couldn’t watch TV as we didn’t own one.

These days it’s very different. Our internet-dependent lives are reliant on electricity. Even doorbells, landlines and cars need electricity. Forget the Seventies: power blackouts will feel like a return to the Stone Age.

The widower of cancer victim Dame Deborah James has spoken movingly of her final hours, saying there were ‘moments of joy’, even as the darkness set in. People always talk about the courage of those who suffer with terminal illness, and rightly so, but let us not forget the pain of those left behind.

I know of two families where young children have lost their mothers to cancer, and the pressure on their fathers to fill that gap can feel overwhelming. I hope Deborah’s husband Sebastien, left, with his late wife, realises it’s not weakness or an act of betrayal to feel this way – and that he has all the love and support he needs.

How bitterly ironic that Sir Salman Rushdie was stabbed in the same week that several British universities said that they’ll remove ‘challenging’ books from their reading lists. It’s precisely the kind of intellectual bigotry these supposed centres of learning are condoning that encourages such acts of abominable violence – and they should be ashamed.

Nine of the 15 contestants on the new series of Strictly are already on the BBC’s payroll. Is there such a dearth of talent beyond the revolving doors of Broadcasting House? Or is the show now little more than a glorified works outing for BBC employees?

‘IF you are a woman,’ Nicola Sturgeon has said, ‘particularly in a senior position without children, there is an assumption made that you’re a cold-hearted bitch that has decided to prioritise your career over children.’ I rarely agree with Scotland’s First Minister but she is 100 per cent right: it is a sexist assumption. However, her argument would carry more weight if she was clear about what being a woman means. When asked earlier this year, she declined, saying it would ‘oversimplify’ the gender debate. This is having your feminist cake and eating it.

Many may be envious of Cara Delevingne’s glamorous 30th birthday party on a yacht in Formentera alongside A-listers such as Margot Robbie and Sienna Miller. But it’s my idea of hell.

Beneath the smiles, you can be sure it’s a cut-throat competition to see who’s the skinniest, prettiest, coolest of them all. No thank you.

While in France recently, I was reluctantly persuaded by my teenagers to stop at a McDonald’s. Imagine my surprise to find that it offered macarons (Emmanuel Macarons, even?).

Say what you like about the French, but it takes class to turn a revolting American fast-food franchise into a culinary triumph.