Scenes From a Marriage ★★★

If there’s one clear lesson from Scenes From a Marriage, Hagai Levi’s five-part reworking of the six-part series Ingmar Bergman made for Swedish TV in 1973, it’s that if anyone ever asks you to reveal the secrets of your perfect relationship you should run a mile.

Invited to reflect on the subject by a grad student from the university where he teaches philosophy, Jonathan (Oscar Isaac) bristles at the manipulations of the “couples industry” while accepting as a given that his marriage to Mira (Jessica Chastain) is every bit as ideal as it seems. But the way Mira fidgets and fusses and fudges her response as he talks over the top of her suggests it is anything but. 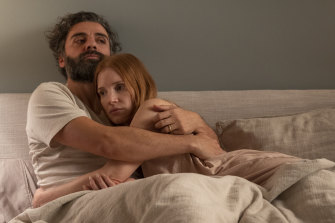 The five-hour journey from that opening exchange is almost all downhill, and it’s a gruelling watch. Chastain and Isaac are in every scene, usually just the two of them, mostly in the lovely three-storey house that is by turns haven and battleground. They are terrific actors, but they can’t quite rise above the staginess of the setting or the exchanges, the self-conscious therapiness of it all, and the very particular circumstances of their characters.

He’s a non-religious Jew wracked with hang-ups about his Jewishness; she’s a mergers-and-acquisitions high-flyer whose restlessness is both engine and brake. He’s the primary caregiver to their young daughter, but his part-time career is a raging success; she is soaring career-wise, if only family life would stop dragging her back to earth. Their specificity makes them real in a sense, but it also prevents the series speaking more broadly to the central question of what makes a relationship work or fail. It can only really address this relationship, these two people, this unique set of circumstances.

Many of the key plot points from Bergman’s original are invoked here, though the dynamic is flipped on its head. I won’t say too much about the specifics, other than to note that updating the sexual politics has had the unfortunate result of making Mira a hopelessly unsympathetic and mercurial figure, and Jonathan a borderline saint.

It is, though, a handsome show that honours its conditions of production with brief behind-the-scenes glimpses of crew clad in PPE, everyone socially distanced, the house revealed to be nothing more than a set. Whether intended as a record of the times or as a representation of the idea that even our most intimate moments are performed, it works.

Overall, though, I’m not sure Scenes From a Marriage does. As couple’s therapy, you’ll get more from Esther Perel’s podcast Where Should We Begin? Hell, you might even get more from MAFS.

It’s like Normal People, with its depiction of a couple inexorably drawn to each other no matter how much damage that entails – only without the excuse of youth. It’s like Woody Allen at his most Bergmanesque, but without the tension-relieving jokes. It’s like any number of depictions of couples tearing each other to pieces in the name of love – Manchester By the Sea, Marriage Story, Blue Valentine, Revolutionary Road, Wildlife – only not as moving.

It reeks of prestige, but Scenes From a Marriage ultimately lacks the warmth, humour or universality to be truly great. In the end, it’s just a slightly pallid imitation of life.