Save articles for later

Add articles to your saved list and come back to them any time.

Prime Minister Scott Morrison says China should not be threatened by the signing of a landmark defence treaty between Australia and Japan, which paves the way for the two nations to conduct more joint military exercises throughout the Indo-Pacific.

Mr Morrison became the first foreign leader to meet with Japan’s new Prime Minister Yoshihide Suga on Japanese soil on Tuesday, clinching the new defence pact which will allow for more maritime war games, military aviation exercises and the stationing of troops in each other’s countries. 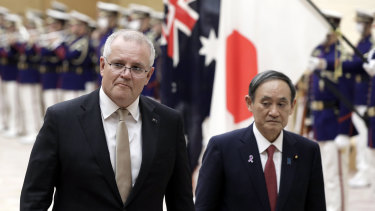 Australia and Japan have signed a new defence pact.Credit:AP

"This is a significant evolution of this relationship, but there is no reason for that to cause any concern elsewhere in the region," Mr Morrison said. "I think it adds to the stability of the region, which is a good thing."

But Chinese government mouthpiece The Global Times said the agreement was not about defence cooperation because Japan and Australia were "geographically distant from each other".

"This agreement clearly targets China and echoes the US' Indo-Pacific Strategy. The agreement further accelerates the confrontational atmosphere in the Asia-Pacific region and negatively affects each country's understanding of the regional situation," the newspaper said in an editorial.

"What's worse, it provides a new lever for the US to divide Asia. Since modern times, it is Japan that had invaded China and Southeast Asia, not that other way round. China did not expand its military to Australia, either."

Australia and Japan will now look to increase their military cooperation in a number of key geostrategic flashpoints in the region, including the disputed South China Sea where Beijing has been steadily militarising by establishing artificial islands.

In a joint statement, Mr Morrison and Mr Suga expressed "serious concerns about the situation in the South China Sea and reconfirmed their strong opposition to any coercive or unilateral attempts to change the status quo and thereby increase tensions in the region".

They also shared serious concerns about the "recent negative developments and serious incidents in the South China Sea, including continuing militarisation of disputed features, dangerous and coercive use of coast guard vessels and 'maritime militia', launches of ballistic missiles, and efforts to disrupt other countries' resource exploitation activities".

"They called for any code of conduct in the South China Sea to be consistent with international law as reflected in UNCLOS, not prejudice the sovereignty and legitimate rights and interests of non-parties to the Code of Conduct or the rights of all states under international law, reinforce existing inclusive regional architecture, and strengthen parties' commitments to ceasing actions that would complicate or escalate tensions."

While Australia and Japan have been engaging in military cooperation in recent years, the Reciprocal Access Agreement will streamline arrangements to support the deployment of troops more quickly and with less red tape.

It is the first agreement covering a foreign military presence in Japanese territory since the 1960 Status of Forces Agreement with the United States.

The in-principle agreement sets out the use of the other country's defence bases, the cost and sharing of refuelling and munitions, claims for accidents and conduct during joint exercises.

The deal follows Australia's return last month to the Malabar naval exercises involving Japan, India and the United States, in a move that unsettled Beijing.

Australia and Japan have been negotiating the RAA since 2014, but a key point of contention for negotiators was the possibility of ADF personnel facing the death penalty for crimes while serving in Japan.

They also reiterated the importance of enhancing regular bilateral and multilateral cooperative activities in the Indo-Pacific region, including maritime activities in the South China Sea, to maintain a free, open, secure, inclusive and prosperous region.