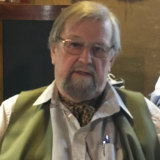 Montsalvat, Australia's longest continuously active artistic community, is venerable enough to have had distinct "eras". One of them ended on Sunday, July 21, with the death of Sigmund Jorgensen, 79, son of Montsalvat's artist founder, Justus Jorgensen (1893–1975).

Sigmund grew up at Montsalvat, the third son of Justus, and the second son of Jorgensen's life-long partner, Helen Skipper (1914–2000). Sigmund made no bones in his own writings about the way the world viewed Montsalvat's liaisons: "Den of Iniquity" is the wry title of one of the early chapters of his 2014 study, Montsalvat (Allen & Unwin). The arrangements were certainly unusual for the times, at least in their defiantly public nature.

Montsalvatwas established in 1934 by Jorgensenwith the support and financial assistance of his wife, Lily (nee Smith), and for many years the triangle of Lily,Justusand Helen, lived atMontsalvattogether, although in different parts of the complex.

Sigmund, like his father before him, had a mixed experience of early adult life. He is on the record as saying that he did not receive much encouragement to follow in the professional footsteps of the men of his family (his uncle Ove was an architect and uncle Elef a doctor). After a childhood and youth spent in the alternately tumultuous and bucolic atmosphere of Montsalvat, he ventured overseas in 1964 to establish a reputation for himself working in theatre.

But, in 1969, a letter arrived, begging him to come back and "take control" of Montsalvat. The utopian community envisaged in the 1930s was beset by the realities that often disrupt utopian dreams: rates, costs, defections, illnesses, and generational friction. Sigmund was "commissioned" to get Montsalvat back on an even keel. He was to make the place financially viable, complete unfinished buildings, and – perhaps the most psychologically demanding task – to "get me on son". In other words, re-establish his father's artistic reputation.

Sigmund arranged for Montsalvat to become a trust upon the death of his father in 1975, thereby securing its immediate future. But his father's last injunction haunted him to the end of his life. There is much Australian art history still to be written about the way Max Meldrum and Melbourne's Tonalist movement were swept aside by the juggernaut of Modernism, with its attendant switch of public and critical attention to the work of painters such as like Sidney Nolan, Arthur Boyd, Albert Tucker, John Perceval and Joy Hester. One associates their names, of course, with Heide, where all-important and steady financial patronage was provided by John and Sunday Reed. Montsalvat had its own generous supporters – Justus was famous for charming donations out of all who came within cooee of Montsalvat – but never the consistent financial and reputational backing enjoyed by the Heide artists.

But Other factors made Sigmund's assigned task harder. After the murder of Mollie Dean in 1930 and the ensuing scandal, which for a while touched on the Tonalist school artists, the group fragmented, and its collective influence was dissipated. (Gideon Haigh's 2018 A Scandal in Bohemia gives a very perceptive account of the period and the players.) Also, Justus, a shy, if forceful man, and always contemptuous of the entrepreneurial and commercial aspects of the life of art, was a reluctant exhibitor. By the time Sigmund organised and mounted a retrospective of his father's work at Montsalvat, the Australian art scene was not in a critically receptive mood.

But, whatever the fortunes of his father's artistic reputation, the Montsalvat that Sigmund "took control of" in 1969 was already a unique collection of extraordinary buildings, sited with Justus's eye for perspective, based on his memories of French vernacular building, and assembled out of the motley of materials available at the time, on and offsite. Whelan the Wrecker was an invaluable collaborator in the business of breathing new life into old iron, great stones, windows, Gothic tracery, bridge timbers and massive slate pavings. Sigmund directed the completion of many unfinished buildings, and oversaw the reconstruction, by Hamish Knox, of the Barn Gallery, after it was destroyed by fire in 1996.

Sigmund's mother, Helen, had initiated the opening up of Montsalvat to the general public. Sigmund expanded greatly on his mother's initiative, introducing concerts, exhibitions, commercial activities and cultural events. Many, like the international jazz festivals, organised with Dr Mal Harrop and others, remain milestones in Melbourne's cultural history. During his time as Montsalvat's director, Sigmund also became mayor of Nillumbik, and, with Iain Hewitson, established the famed restaurant, Clichy.

In 2005-6, further financial troubles forced the four Montsalvat trustees to hand over control of the organisation to a newly formed company, Montsalvat Ltd. Sigmund, along with his fellow trustees Max Jorgensen (his half-brother) and broadcaster Phillip Adams, became members of the incoming board, along with ALP luminary Barry Jones, and Sigmund's long-term friend, Robyn Quigley, who as CEO moved deftly to address the financial crisis. They were joined by other board members, including Dr Catherine Dale, who remains on the board to this day, and is its current chair.

Sigmund, by his own admission "not a team player", did not take easily to the new regime. His disagreements with the Montsalvat board and management, including Robyn Quigley and her highly qualified successor, engineer and former CEO of Yarra Ranges, Rob Hauser, were frequent, many of them expressed publicly on social media.

Yet during this time, and with the board's endorsement and financial support, Sigmund wrote his book on Montsalvat. In 2018, he had completed the manuscript of a further book detailing his experiences with food and hospitality and was planning a further volume on Montsalvat's characters. In 2018, the new executive director of Montsalvat, Jacqueline Ogeil, drew on a shared passion for music (Dr Ogeil is a celebrated harpsichordist) to build a positive and bantering rapport with Sigmund, and he endorsed her leadership.

Sigmund always claimed to be "married to Montsalvat". He was also loved and cared for by his partner, Sue Giffney, and it is to her and her family that all at Montsalvat extend their deepest sympathies.