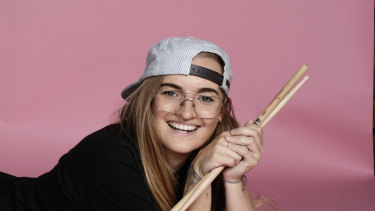 G Flip, aka Georgia Flipo, makes electronic pop that sweeps you up and wrings you out. Credit:Louise Kennerley

It's hard to believe only 22 months ago, G Flip was sitting in her bedroom uploading her first single. Before a sold-out crowd, the 25-year-old Melbourne born Georgia Flipo displayed a stage presence, songcraft and instrumental prowess with world-conquering potential.

The world is, after all, overdue for a chart-topping female drummer and singer to follow Karen Carpenter. Flip started drumming at nine and knows her skills on the sticks set her apart in the pop world, for this was an unashamedly drum-oriented show.

The drum riser was centre stage, there were neon rainbow drumsticks, and the kick drum skin hosted an LED light show throughout, with emojis to match the mood of the moment.

More importantly, Flip's playing heightened those moods rather than steamroller us with virtuosity. That debut song, About You, went viral upon release and raised the roof first up this night, in part because of the dramatic drum fill that comes in three minutes late. (Flip acknowledged the debt to Phil Collins with a snatch of In The Air Tonight during a drum solo later.)

Lover, the opening track of the album Flip put out in August, was next and reinforced other elements of her appeal: a Prince-like gift for writing radio-friendly tunes that retain atmosphere and dynamics, with heartworn lyrics balancing directness and enough ambiguity that this crowd, whose enthusiasm never flagged, were able to project themselves into the songs.

Flip's singing mostly helped up the emotion in the room. She doesn't have the biggest range, but there was an expressiveness, and occasional sultriness, that wrung aching desire from Morning (performed solo on keyboard) and vulnerability from Bring Me Home, this night's most gorgeous melody.

She does need to project her lower register more: conversational and affecting on record, it sometimes got lost in the mix.

But Flip's biggest songs are all about declamation. With her two-man band filling bass guitar, drum and keyboard duties when she wasn't, Flip spent much of the show striding back and forth, selling the love-tortured likes of Stupid, Killing My Time and Drink Too Much into empowering anthems.

Of the two unreleased songs, Hyperfine was in a similar self-flagellating vein, but You + I – dedicated to Flip's partner Gemma – was an infectious soul-pop love song, and should find her new fans.