Spoilers: Horror fire, a truce, and Terese turns to drink in Neighbours 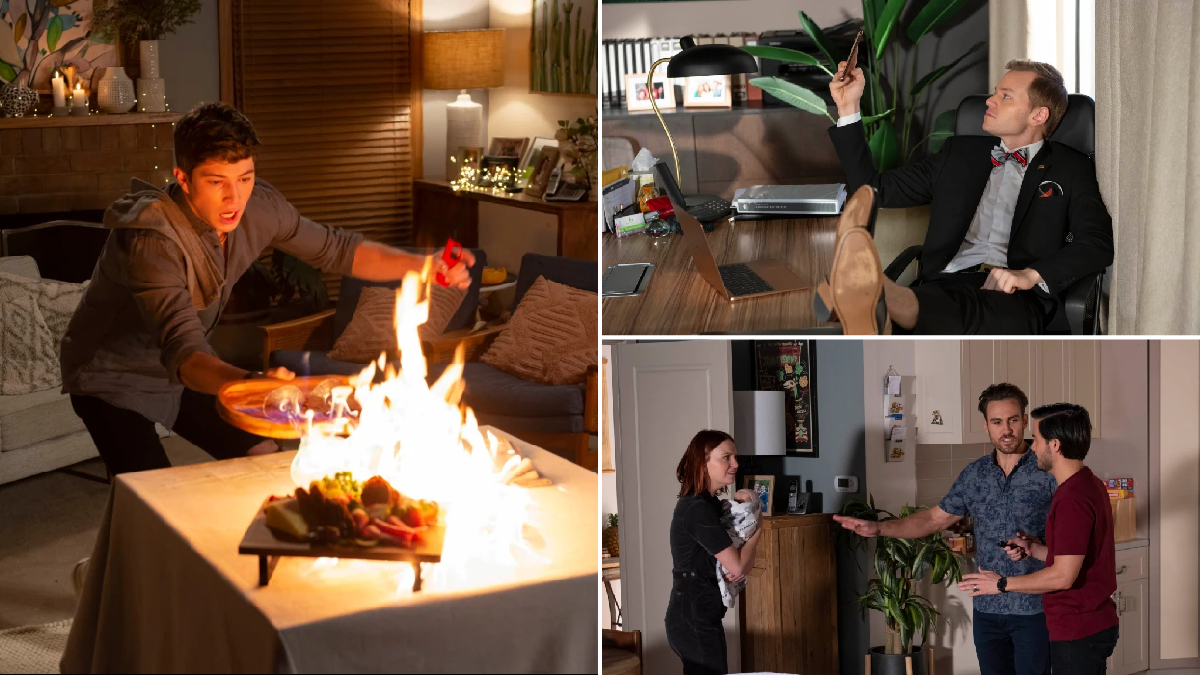 Hendrix (Benny Turland) and Terese (Rebekah Elmaloglou) are having the toughest times of all the Neighbours this week as Hendrix courts serious disaster, while Terese waves goodbye to her sobriety.

Terese is on the brink of falling off the wagon and it’ll only take one push to do it. That push comes in the form of Paul Robinson (Stefan Dennis) being an unfeeling oik and making a move that is enough to shred Terese’s last nerve. How bad will it get?

There’s sad news over in camp Canning as Kyle (Chris Milligan) learns more about his cancer, and it’s worse than he thought. How will he and Roxy (Zima Anderson) cope?

While Terese and Kyle are struggling badly, Ned (Ben Hall) is suffering from serious first world problems. His polyamorous girlfriend isn’t giving him enough attention, so he goes down the oh-so-mature route and tries to sabotage the other half of his poly relationship so that he can get Amy to himself. And how do we think that’s going to go?

Elsewhere, there’s a new guy in town and he’s ruffling Chloe’s (April Rose Pengilly) feathers. And Nicolette (Charlotte Chimes), Aaron (Matt Wilson) and David (Takaya Honda) may, just may, have called a truce. How long will it last?

Here’s what’s ahead in Neighbours.

Felicity isn’t up for sharing Levi, which is bad news for Amy. It’s also bad news for Ned, who is getting fed up with her being so pre-occupied with the other corner of their love triangle. He offloads to Toadie, who gives him food for thought about the whole poly situation. He has an idea that he puts to Felicity that’ll get them what they both want. Ned has a sneaky plan to get Amy all to himself, but is it going to blow up in his face?

A picture of calm

Things are still rocky between Nicolette, Aaron and David. Jane is desperate to get them to all just take a step back and calm down, so she has an idea – she sets up a family photoshoot to create some fond memories for Isla to look back on. It’s a lovely thought, but not quite enough to get them to all see eye to eye for longer than a few minutes.

After everything that’s happened, Nicolette has no intention of giving the boys full custody of Isla and they are distraught. But then David, touched by Nicolette’s emotional plea, comes up with an idea that might just suit them all.

Mick Allsop’s arrival at Lassiters has the exact effect Harlow is after – he’s terrible and Chloe is lumbered with him. But Chloe isn’t daft, she knows Harlow has had a hand in his hiring and confronts her over her devious, but not foolproof, plan. Harlow lies to her face that she had nothing to do with it, and as Chloe’s stress levels rise Harlow realises it could all work out better than she imagined – with Chloe being tempted back to the vineyard.

Kyle’s cancer news is worse than he imagined

Kyle gets the results of his scan and it’s bad news. Roxy tries to support him the best she can, but she has no idea how to be there for him through this. There are some tough times ahead, but Kyle attempts to mitigate at least one by making a deposit at the sperm bank. Roxy is pleased he’s thinking of the future and encourages him to keep going, but he’s struggling to keep his mind on the job. Roxy comes up with an idea to, er, give him a hand, but her assistance is not at all well received.

Mack and Hendrix’s sex on fire

Hendrix has got the right idea, he wants his and Mackenzie’s first time to be super special. He goes all out, decking the house out with all sorts of loveliness ready for their sexy times, but while sparks between a couple is usually a good thing, they’ll have a devastating effect in this case. As Hendrix puts the final touches, disaster strikes – just as Mack arrives home he knocks over a candle and the place goes up in flames. They wanted to be a hot couple, but this is too hot. Will they get out in time?

Terese’s nerves are hanging on by a thread as she navigates her new world without Paul by her side. She’s pushing herself hard in a bid to block out her demons, but she’s on the verge of burn out. Chloe finds her asleep in the Waterhole after working hard on the presentation. Paul arrives on scene and offers to take her home, and Terese reluctantly takes him up on the offer. But being in such close proximity to him in the car shoves her closer to breaking point.

When she later arrives at the Summit and learns Paul has amended their presentation without her consultation, she’s done – and she reaches for her old pal, her hipflask. Meanwhile, Paul is too busy to notice as he’s spotted someone he recognises while in Queensland and he can’t quite believe his eyes. Who is it?