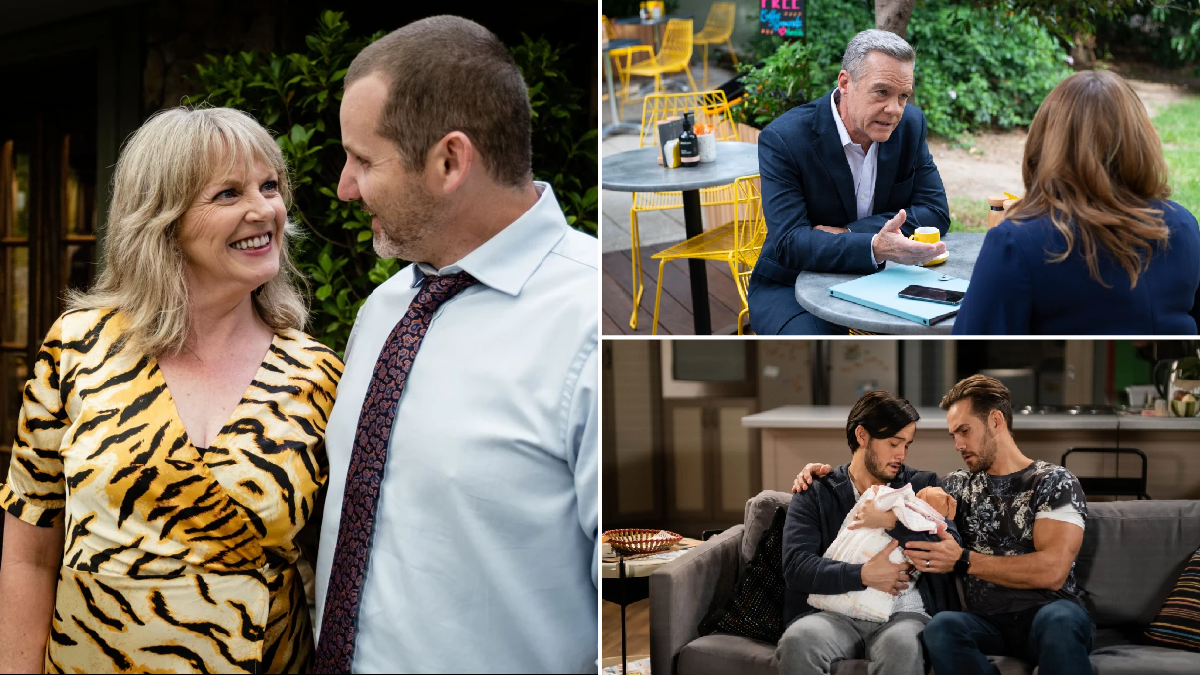 The fight is on in Neighbours this week as the battle of the baby begins for Nicolette (Charlotte Chimes), another local battles for their life and Terese (Rebekah Elmaloglou) reignites her battle with the booze.

And they can’t all be winners.

Kyle (Chris Milligan) returns from his trip with devastating health news that could have a significant impact on his future. Will he seek out the help he needs?

For Nic, she’s about to face off with the Robinson lawyers and she knows they are pretty much unbeatable. How can she stop them from taking her baby daughter?

Terese is renewing the biggest battle of her life when the fallout from her marriage ending drives her to drink again. Can she be saved before she takes a fateful sip?

And Melanie (Lucinda Cowden) is handed some devastating health news after a small fall leads to a painful discovery.

Here’s what’s ahead in Neighbours…

Toadie has always secretly wished his children would follow in his footsteps, so he is absolutely thrilled when Nell reveals she’s a little wrestler in the making. He and Melanie decide to make it into a big family day, turning the lounge into their wrestling match. But just as things get going disaster strikes; Melanie slips and fractures her wrist. David takes a look and is immediately concerned as it’s no normal fracture – it’s done a lot of damage and looks like she could have osteoporosis. Mel is mortified at the thought of having an ‘old lady disease’ and buries her head in the sand about the seriousness of it. Can Toadie make her see sense enough to get herself tested?

Kyle returns from Frankston and Toadie is immediately on his case, digging to find out what went on there. It’s unusual for his pal not to have been upfront about a trip like that, so Toadie knows something is up. His worries are confirmed when Kyle turns cagey. He then spots Roxy crying and puts two and two together about what really went on. Naturally, the answer he comes up with is way off – he has no idea that the real truth is that Kyle has cancer. He’s gob smacked when Kyle tells him, and is gutted his mate has been shouldering this burden alone.

Even now Kyle refuses to tell his family, stating that his gran won’t be able to handle it, especially as he doesn’t yet know himself what the next steps are. But Roxy is struggling to handle the situation.

Will he come clean with his family to help her?

The battle for baby Isla begins

Paul has got his criminal lawyers on speed dial and is ready to call them at David’s request. Aaron is the one making them drag their heels, he’s not ready to take this what could be a disastrous step. Nic gets wind of Paul’s plan and is left terrified she’ll lose her daughter as she knows there’s no way she can compete. Jane can see how much stress Nic is under and approaches Paul herself, handing him a deal she hopes he won’t say no to.

Terese lets her guard down and tells Harlow she misses her husband, and Harlow decides not to keep this to herself. In fact, she shares it with the one person Terese never wanted to hear such a thing. When she learns what Harlow has done, she kicks her out in anger, but later regrets her hasty actions and tries to apologise. Harlow is having none of it, deciding to side with her granddad. Terese is feeling unstable and turns to her old friend – a bottle of wine. Chloe finds her just in time and manages to pour the wine down the sink, but it’s just the start of Terese’s renewed battle with addiction, especially when she receives an email stating she and Paul must work together on a project. Will she fall off the wagon?

Amy is in the doghouse – Sheila discovers Amy saw a text from Felicity and chose to keep it from Levi, and of course Sheila is quick to fill Levi in on this. Levi is gutted Amy would be so selfish and when he confronts her, she tries to defect blame onto Ned. Naturally, Ned is annoyed at this, meaning Amy has managed to alienate herself from both men. But instead of trying to fix things, she makes it 100 times worse through a mistake with Felicity.

Nic senses Aaron’s reluctance to go ahead with legal proceedings and hopes she’s found an ally. But her efforts to make him see her side of things go wasted as Toadie is the one to come bulldozing his way in convinces Aaron to take Paul up on his offer. Could this all backfire when they learn that it’s not only Nic who will suffer a character assassination in court, David will do?