State border controls in question ahead of Christmas

Border restrictions keeping families separated ahead of Christmas will be debated at national cabinet as states with no COVID cases push back against plans to lift restrictions in line with the national plan.

All Australians aged 60 and are now able to get Pfizer or Moderna around the country, with 11 million doses of both mRNA vaccines scheduled to arrive in the country in October. So far, nearly 78 per cent of everyone aged 16 and up has had one dose, and 54.2 per cent of the eligible population is fully vaccinated. 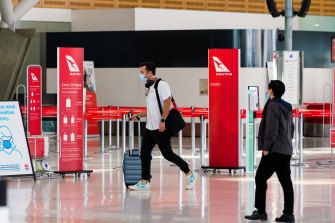 National leaders will debate when state and territory borders should reopen when they meet at national cabinet on Friday.Credit:James Brickwood

In Friday’s national cabinet meeting the country’s leaders will also get an update on vaccine supplies, epidemiology and health system capacity. They will also discuss the national recovery plan, which does not currently include an explicit agreement about when state borders should open.

Health Minister Greg Hunt said the national plan focused on 70 per cent and 80 per cent double dose rates, and pointed out that NSW, the ACT and Victoria have all administered first doses to 80 per cent or more of their eligible populations. The ACT has vaccinated more than 90 per cent so far.

“All of the states and territories committed to the national plan, and as the Prime Minister has said, that was a partnership not with the Commonwealth, but with the Australian people,” he told reporters on Thursday.

“What we are seeing is the fact that states and territories, in many cases, will far exceed the national plan. And that capacity to get to 90 per cent does exist in, I think, many of the jurisdictions.”

But there has been no consensus between jurisdictions about when hard borders should be lifted. On Wednesday, Tasmanian Premier Peter Gutwein said the state was unlikely to reopen its border until 90 per cent of the local eligible population was fully vaccinated.

Queensland Premier Annastacia Palaszczuk said she would not comment any further on lifting border restrictions until after Friday’s national cabinet meeting.

“I will have those discussions at national cabinet, where every state and territory can put their views to the Prime Minister,” she told reporters on Thursday.

The Australian Health Protection Principal Committee, made up of state and territory chief medical officers and led by Commonwealth Chief Medical Officer Professor Paul Kelly, will also update leaders on a plan to allow vaccinated visitors into aged care facilities across the country, and will recommend mandatory vaccinations for all healthcare workers.

Labor’s health spokesman Mark Butler said the federal government must outline its plan to show how COVID-free jurisdictions including Tasmania and WA will cope once the country opens up.

”[National cabinet should] release modelling on the impact of COVID spreading to other jurisdictions in our country, on our hospital systems and more importantly, what their plan is to make sure that our hospital system is prepared for an increase in COVID cases,” he said on Thursday.

The senate COVID-19 committee was told work on the authenticated vaccination record, which could be recognised overseas once international travel resumes, was almost ready to roll out. It comes after the app to scan the QR-coded vaccine certificates was added to app stores.

“That’s in the final stages of being completed,” chief executive of Services Australia Rebecca Skinner told the committee.

Services Australia also said the states and territories asked for proof-of-vaccination to be integrated into their check-in apps, rather than through the COVID Safe app, which has so far cost the federal government more than $9.1 million.