As the sun set in Newcastle on Sunday, another star was readying to rise one last time.

First came the opening of Bennie and the Jets, then the rumbling of that voice – as powerful as ever – and the crowd was enraptured from the get-go. 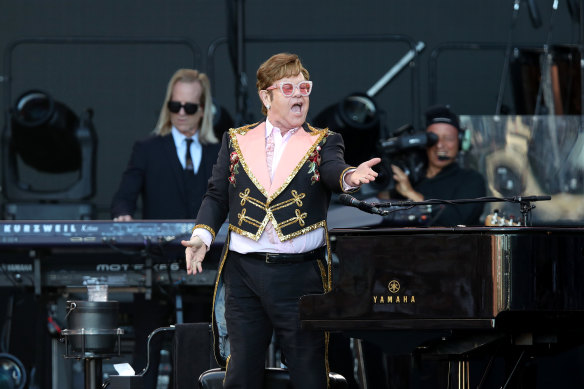 Elton John in the first show of his final tour in Australia.Credit:Gregg Porteous

Wearing his signature sunglasses and bling, and with the piano as his playground, the 75-year-old’s infectious energy appears boundless as he takes us through a catalogue of hits from Tiny Dancer to Cold Heart.

At the same time, the rock legend, who has endured his own struggles with mental health, is just as powerful in more poignant ballads such as Someone Saved My Life.

Percussionist Ray Cooper and Davey Johnstone on vocals and guitar are stand-outs in a brilliant band that John admits is “probably my favourite”. They come together most strikingly on Rocket Man.

Half a century on, his first international hit, Your Song, is still a crowd favourite, tugging at heart strings in this, the 272nd show of his worldwide farewell tour.

The concert is also a farewell to the people who came before him and inspired his music.

Candle in the Wind, written with long-term collaborator Bernie Taupin for Marilyn Monroe, is a poignant highlight. Border Song is dedicated to Aretha Franklin who, John says, “blew the roof of the cathedral” when she performed for the final time at his annual AIDS foundation gala months before her death.

Among these bittersweet moments, he looks on with affection at fans dancing along, stopping between every song to thank them before returning to the keyboard.

Goodbye Yellow Brick Road sees him off the stage, but the ballad and his presence somehow remain long after he has gone.

Befitting for a giant star, John goes out like a supernova. And while he says, “we’ll never see the light of someone like Aretha Franklin again,” his own light will continue to reach us long after he’s gone.

Elton John plays a final show in Newcastle on Tuesday evening before winding up his Australian tour in Melbourne, Sydney and Brisbane.