The Swedish royal family have gathered on the balcony at Stockholm’s Royal Palace today to mark the king’s 76th birthday, for the first time since 2019, after the pandemic put the annual tradition on hold for two years.

King Carl XVI Gustaf’s wife, Queen Silvia, 78, along with his children and grandchildren, took to the famous balcony to watch the courtyard parade.

Also among the royals was Victoria, Crown Princess of Sweden, 44, the heir apparent.

She was seen smiling and looking regal in a blue coat, with her hair styled into a low, sleek ponytail, as she watched the celebration and waved to crowds. 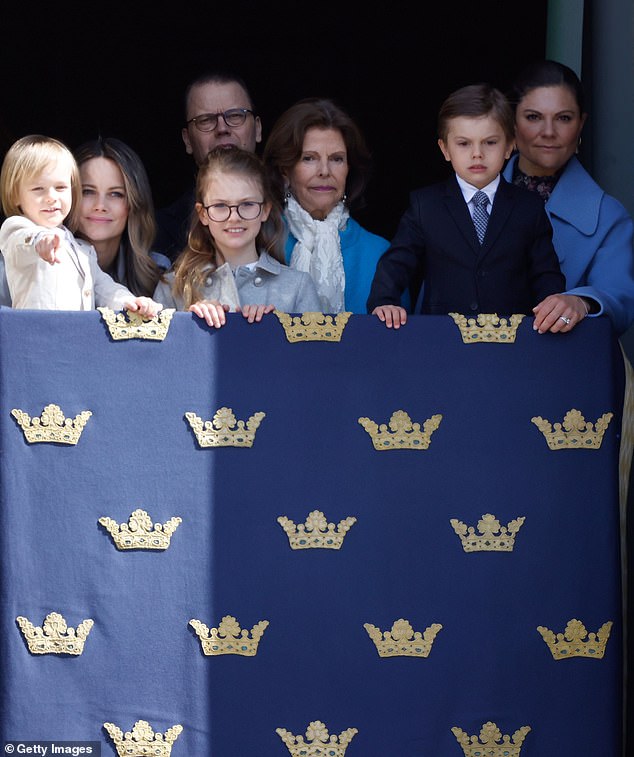 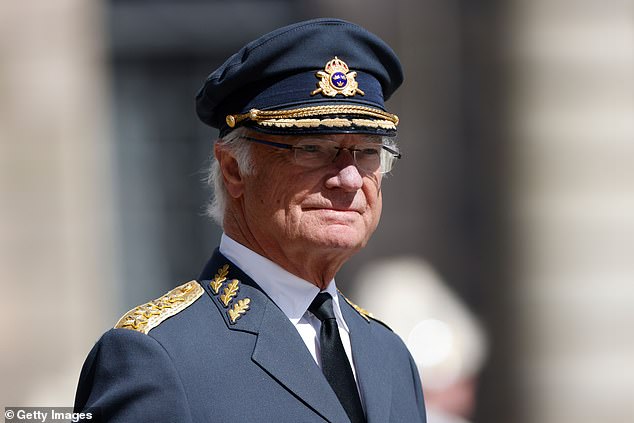 King Carl XVI Gustaf of Sweden, who celebrates his 76th birthday today, is pictured during the traditional courtyard parade 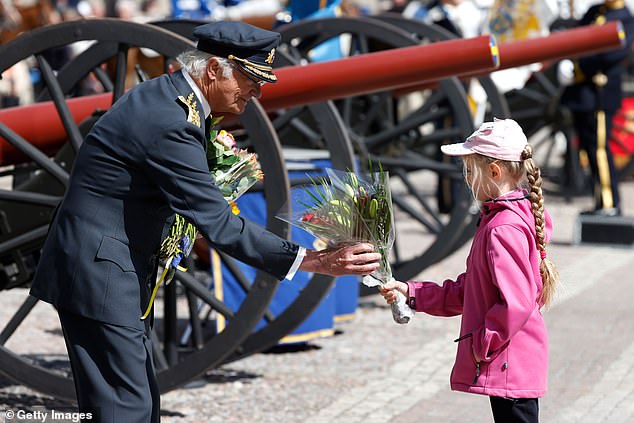 During the event, the first to be held since 2019 due to the Covid pandemic, the monarch was seen receiving bouquets of flowers from members of the public

Her son, Prince Oscar, six, looked dapper, matching the blue in her outfit with his own royal blue tie and a navy blazer, while her daughter Princess Estelle, 10, looked smart in a pale grey coat, and her tortoiseshell glasses.

Victoria’s husband, Prince Daniel, 48, a former personal trainer, also sported a navy blue suit and royal blue tie, as he gazed out at the assembled crowds.

Queen Silvia completed the blue theme, opting for a lighter azure coat, and a cream scarf. She finished her smart look with soft make-up, showing off a pink lip, and gently waved locks.

Meanwhile, down in the courtyard, King Gustav donned his traditional uniform, alongside his youngest child, son Prince Carl Philip, 42, who also wore military regalia to take part in his father’s birthday celebrations. 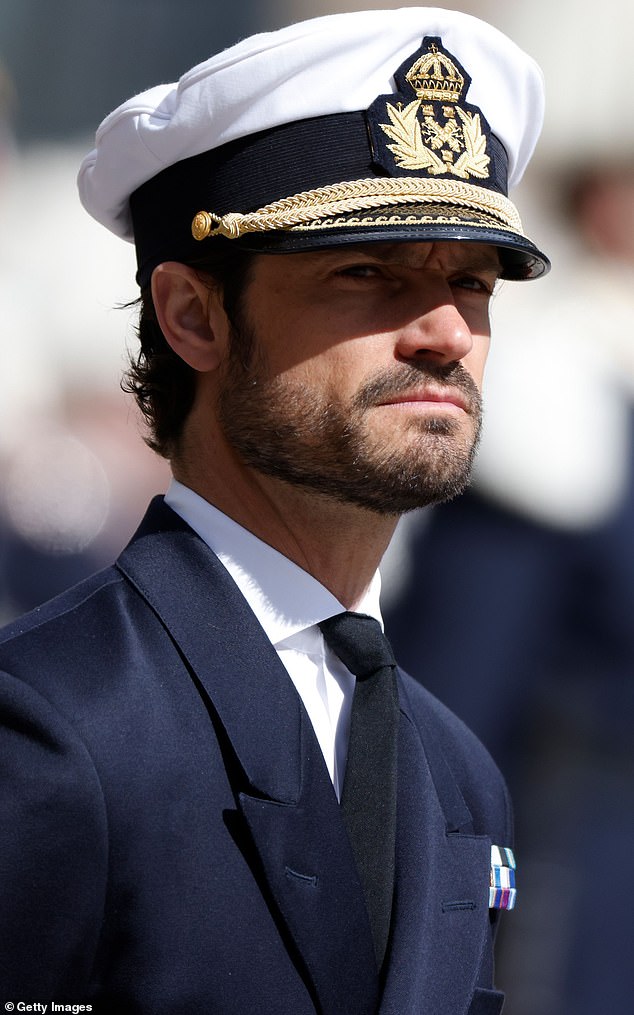 Prince Carl Philip, 42, the younger brother of Crown Princess Victoria, looked dapper as he donned a uniform to join his father in the palace courtyard for birthday celebrations

During the courtyard celebrations, the king (right) number of parades, including a performance by the royal marching band (left) 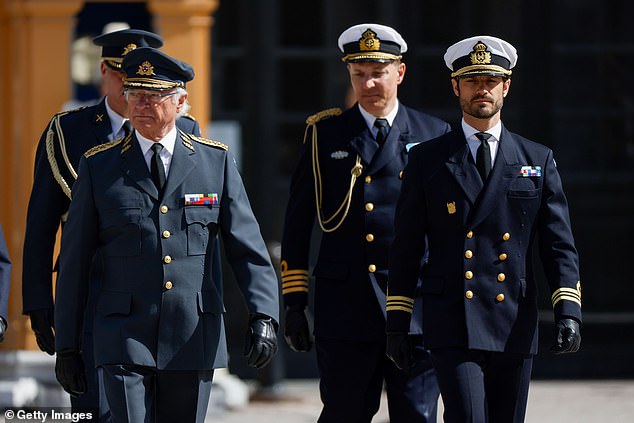 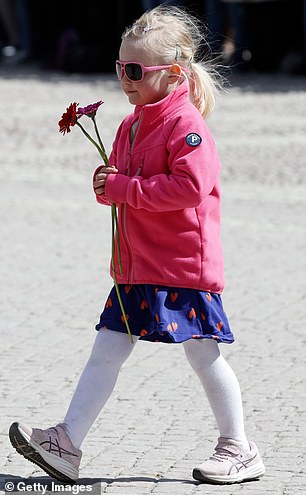 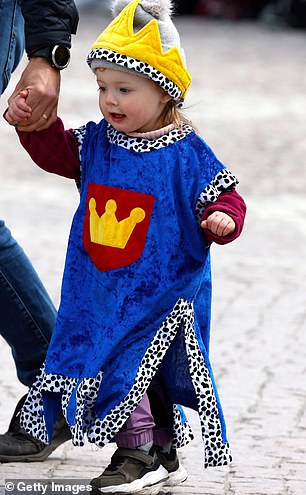 During the celebrations, children were seen queuing up to wish the king a happy birthday and give him flowers 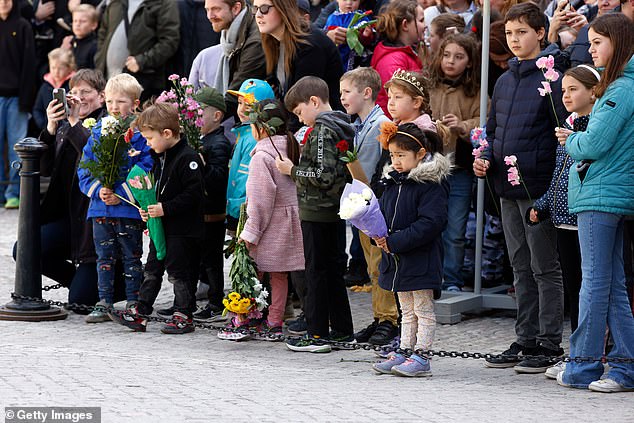 Long queues of well wishers were spotted, perhaps keen to embrace the returning tradition, after its two-year hiatus due to Covid

Prince Carl Philip’s wife Princess Sofia, 37, and one of their three children, Prince Gabriel, four, watched him from the balcony.

After watching the Royal Marching Band, the monarch was seen meeting the public, accepting bouquets of flowers from children who lined up to wish him a happy birthday.

The event marked the first time King Gustav has taken part in the traditional celebration since 2019, after plans were scaled back in 2020 and 2021 due to the pandemic.

Last year, he enjoyed a small reception, but no parade in the outdoor courtyard was held. In 2020, he spent his birthday in isolation, with the Palace releasing new images to mark his 74th. 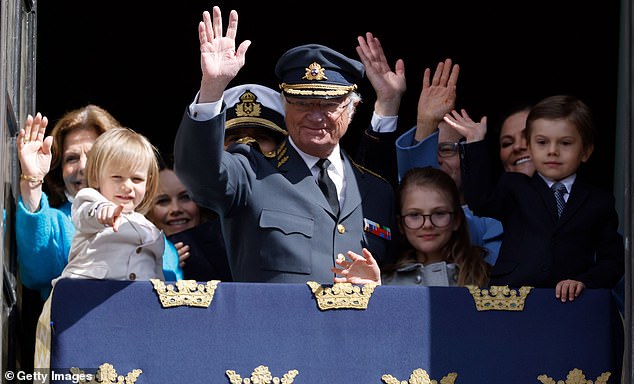 During the birthday celebrations, King Gustav was seen on the royal balcony alongside his family, as well as in the palace courtyard 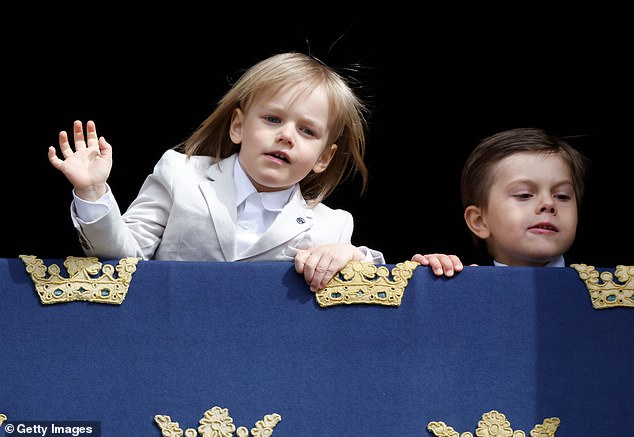 After the family left the balcony, Prince Gabriel of Sweden (left) and Prince Oscar of Sweden (right) were seen fooling around and pulling faces 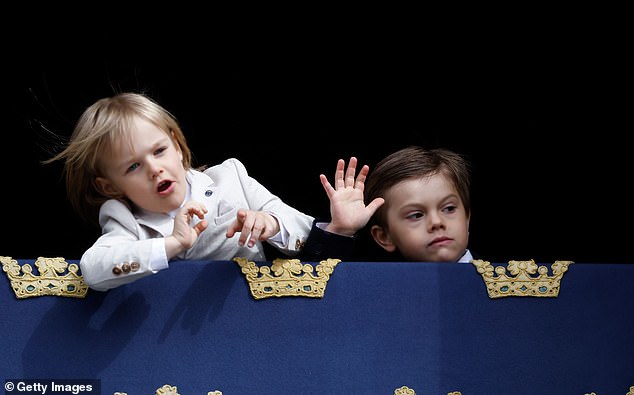 The royal, who is the second-longest reigning monarch in Swedish history, took to the throne in 1973, when he succeeded his late father, Gustaf VI Adolf.

He married the German-born Silvia Sommerlath, now 75, in 1976 after meeting her when she was a hostess at the 1972 Olympics.

In 1980, a law was passed which abolished male preference in the line of succession.

That means Crown Princess Victoria, rather than her eldest brother Carl Philip, is the heir apparent to the throne.

She is expected to become Sweden’s first female monarch since the 18th century.