A large swath of eastern NSW including most of the Sydney region is in for a stormy Monday afternoon, as a large thunderstorm cell swept eastwards bringing the potential for flash floods.

The Bureau of Meteorology issued a severe thunderstorm warning for heavy rain and damaging winds for residents from the Blue Mountains to Gosford and the Illawarra to the entire Sydney region. 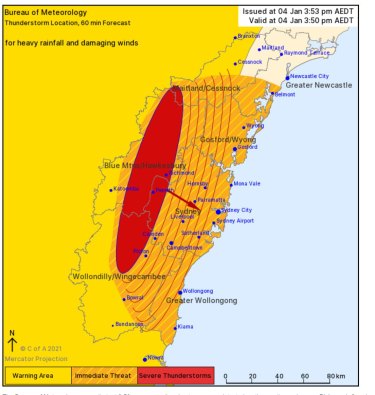 Most of the Sydney region and surrounding areas were facing severe thunderstorm risks on Monday afternoon.Credit:BoM

"Heavy rainfall that may lead to flash flooding and damaging winds are likely," the bureau said.

Among the ares expected to be hit by 4.20 were Parramatta, Campbelltown, Liverpool and Bowral, while by 4.50pm the list was likely to include Hornsby, Sutherland, Wollongong, Sydney Airport, Sydney Olympic Park, and the Sydney Harbour Bridge, the warning stated. 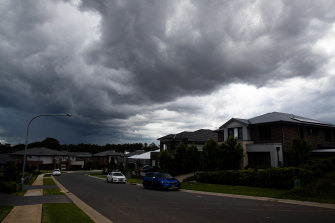 Much of Sydney could cop heavy rain and damaging winds on Monday afternoon. (This image is from October last year.)Credit:Janie Barrett

Sydney recorded its wettest year last year since 1998, and the forecast is for showers each day for the coming week.

Thunderstorms, though, are also possible on Tuesday.

What's in store for today? Your horoscope for January 22, 2021
Entertainment