Tech execs in $400 sneakers and Instagram influencers in $6,000 Louis Vuitton windbreakers: 5 ways wealthy millennials are turning to 'uniforms' to cement their identity and status

What you wear can say a lot about who you are.

Look no further thanwealthy millennials— who wear specific styles, clothes, and brands to represent their identity and cement their status — to see the psychology of fashion in action.

Read more:From Converse to Air Jordans, sneakers have been a status symbol for decades — but millennials are redefining what that means in 3 major ways

While each uniform is different, they do share a few commonalities: Most involve an expensive shoe, and all are rooted in millennials’ love of comfort and preference for a casual appearance. And while these looks are presented here as separate uniforms, some of the staples appear across different groups. They’re also not exclusive to wealthy millennials — each look is part of fashion’strickle-down effect, in which trends make their way from runway to retail and the mass consumer.

From the tech CEO to the Instagram influencer, see what rich millennials are wearing.

Tech CEOs and execs keep it casual and comfortable with Lanvin low-tops or Common Projects (both cost around $400 on average). 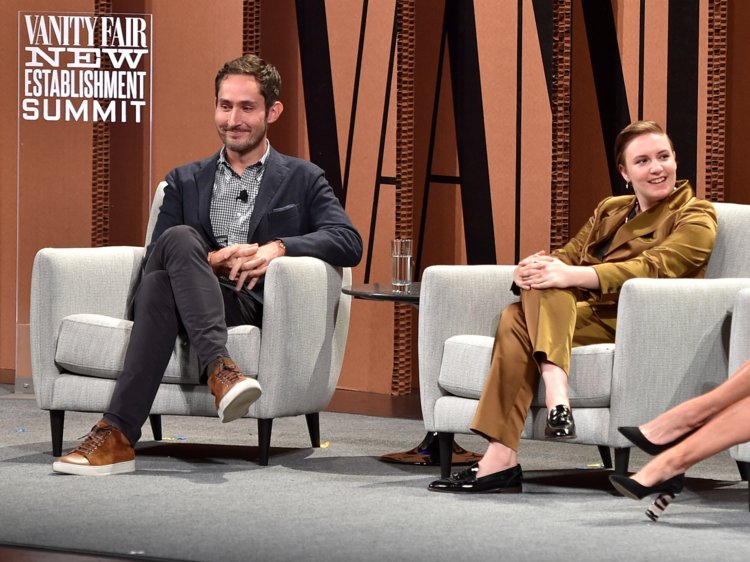 Mark Zuckerberg’s signature look is the pinnacle of Silicon Valley’s casual fashion. He pairs gray T-shirts and hoodies, whichreportedly retail for hundreds and even thousands of dollars, with jeans and sneakers.

Like Zuckerberg, other tech CEOs and executives embrace a laid-back uniform, complete with low-top kicks like Lanvin or Common Projects, which have become a status symbol in the tech world.

Read more:From Converse to Air Jordans, sneakers have been a status symbol for decades — but millennials are redefining what that means in 3 major ways

“For many of the Valley’s elite, the right pair of kicks is a trademark accessory carefully selected to convey a mix of power, nonchalance, creativity, and exclusivity,”Business Insider’s Avery Hartmans wrote. 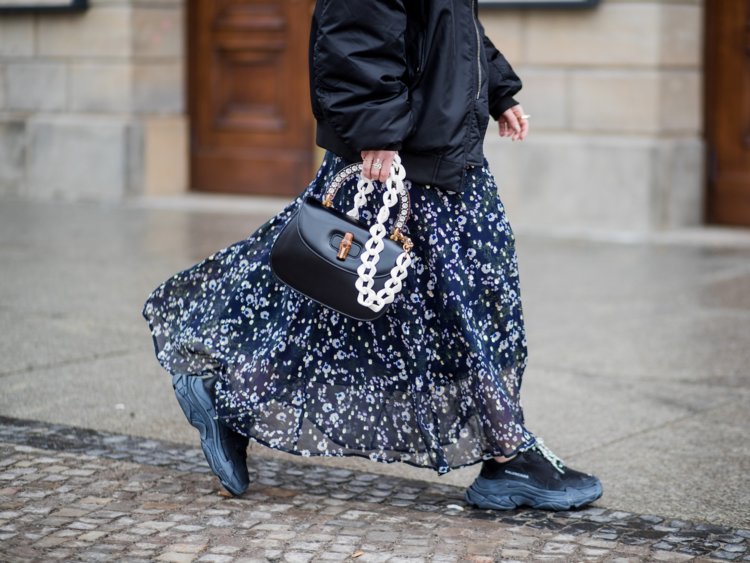 For “fashion people,” status is no longer about the purse.

Balenciaga Triple S sneakers, which are worth nearly $900, have appeared on the feet of a host of editors and celebrities. The brand’s speed sneakers recently madeLyst’s ranking of the world’s top 10 fashion products,Business Insider’s Mary Hanbury reported.

“There are sneakers everywhere,” she said. “Years ago it used to be that women would wear sneakers on the subway or walking to work and then immediately would get into the office and go into their bags. That’s no longer the case.”

AsThe New York Times reported, Brooklyn moms are adopting a bohemian style, and it exudes asubtle sort of wealth. The look features two staple elements: theSalt strap, which costs $138 and up, and theNo. 6 clog, which retails starting at $300.

The bright, woven Salt straps are advertised as customizable additions to designer purses — thinkGucci andCeline at $2,500 and $2,600 a piece — with price tags that already run well into the thousands of dollars, wrote Hayley Krischer for the Times.

The No. 6 clogs are part of the aforementioned “ugly-fashion” trend.

“Clogs, for their part, once the epitome of uncool and unfashionable, are now being touted as an ‘ugly-chic shoe obsession’ by the likes ofVogue and as a fashion ‘staple’ byStyleCaster,”Business Insider’s Lina Batarags wrote.

But they don’t just make a newly chic statement.

“For moms, specifically, the No. 6 clog gives off a message that you’re very much interested in comfort and not so interested in appearance,”Krischer wrote for The Times. 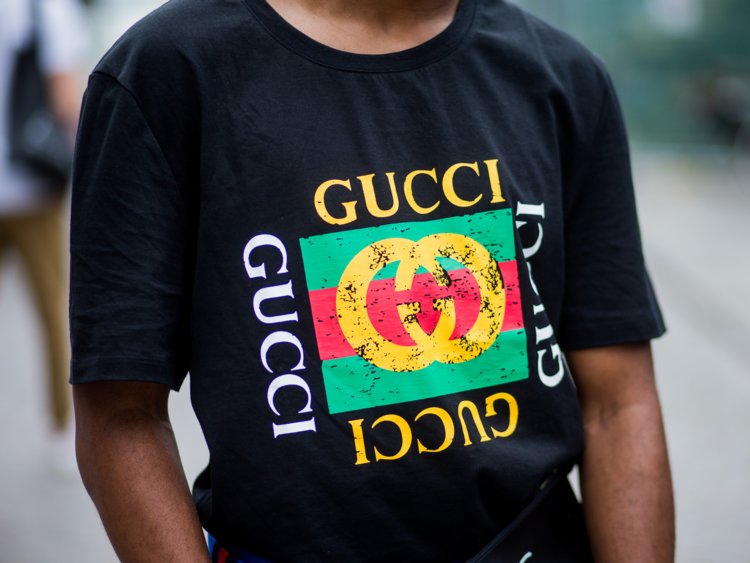 Thestreetwear subculture has been around for decades, originating in skate, surf, and hip-hop cultures, but social media and the rise of athleisure have recently brought it to the forefront of fashion.

Streetwear styles and graphics resonate with image-obsessed millennial consumers, who like streetwear’s casual and comfortable silhouettes like t-shirts, hoodies, and sneakers, Schneider said.

The consumers of luxury streetwear may be a niche group — but it’s a group that carries a lot of influence on social media. While the style is seen on both women and men, it’s more popular among the latter, according to Schneider.

College students flaunt their status on campus with Golden Goose sneakers ($500 and up) and MZ Wallace backpacks ($285 and up). 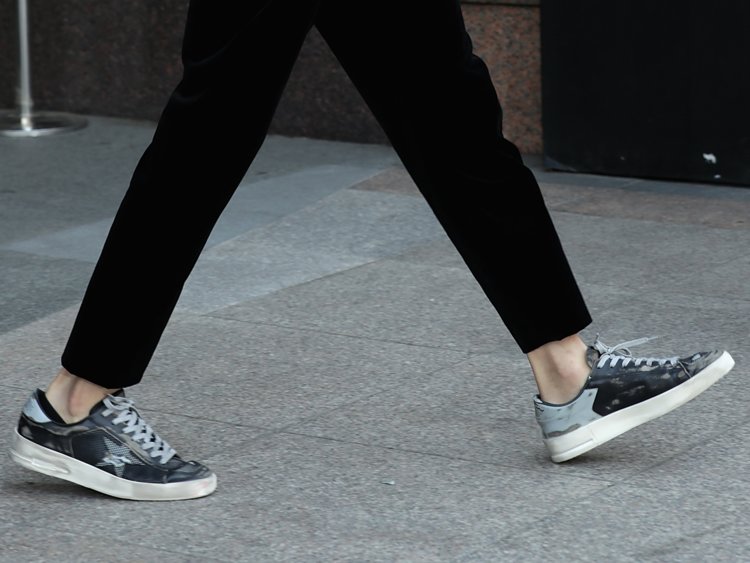 Golden Goose sneakers, which typically cost around $500, but range from $445 to $1,700, are hot on college campuses across the country.

They’re thelatest trend among USC fraternities and sororities, reportedJennifer Medina for The New York Times. Graduates of the 2019 class at Cornell University and the University of Florida told Business Insider the brand is also popular on campus.

Some of the high-end Italian brand’s sneakers have a grunge aesthetic — they come pre-distressed. Golden Goose’s $530 Beige Scotch sneakers — calf-suede shoes with dirty-looking soles and taped trim at the toes — elicited accusations that the company was “mocking poverty,” reportedAndy McDonald of HuffPost.

P448 sneakers, which range from $265 to $315, and Common Projects shoes are also popular on campus, the Cornell graduate said, as areMZ Wallace backpacks, which feature quilted nylon and natural Italian leather and retail for $285 to $395.

SEE ALSO:A $500 pair of sneakers is one of the latest status symbols at USC frat parties, and it highlights the massive wealth divide among students

DON'T MISS:9 unlikely items that have become luxury status symbols among the elite