The idea for Fluffy, an interactive family show set in a cascading wonderland of mountainous shredded paper, came simply.

“We were trying to make something from a million ideas,” says Frank Newman, co-artistic director of Artbomb, the show’s creator. “Then one of us picked up this shred of paper and chucked it at the other. We thought, ‘That’s the show’. 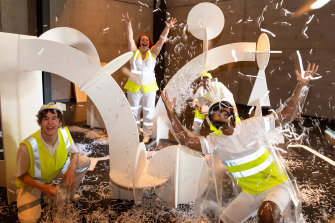 Part of Sydney Festival, Fluffy champions creative free-play for all ages on a large, immersive, hands-on set installed within Carriageworks.

Using 200 kilograms of recycled paper, kids and adults can throw themselves into huge piles of freshly shredded paper, hunt hidden gifts and clues, build a collaborative sculpture and grapple with thousands of paper fragments blown into the air or cascading from a 100-metre network of pipes.

“It’s spectacular and fun and we want it to be overwhelmingly fluffy,” he says. “The intention is to bring people together in play. There’s nothing more wonderful than seeing kids and their parents, and other people, playing together.”

Newman and Artbomb co-artistic director Curly Fernandez have observed how interactive arts and theatre-based projects aimed at families can often result in kids playing and parents and carers watching from the perimeter.

“We were interested in how art can actually bring different generations in the family together and discover something new about each other,” Fernandez says. “The audience feel they can run amok. They have license to play, make their own creations and we want to see what they come up with.”

Artbomb are also keen to upend rules about creating mess and touching art, particularly for children whose impulse in a gallery space may be to stroke sculpture or brush a curious hand across paintings.

“I’ve got two kids and when they were younger, there was this whole thing of, ‘Don’t touch that’, ‘Be careful of this’,” Fernandez says. “Parents are always in instruction mode and we want to release them from that so they can play with their child in a space where nothing could break and they can let them be free.

“We’re asking, what happens if you’re allowed to be chaotic with the artwork? There’s parts of the show where ripping it and breaking it, all those things you’re not allowed to do, is how you make it. We’re asking, can something beautiful emerge?”

“It could be on their shoes to give them big fluffy slippers,” Newman says. “Or to make themselves part of the artwork. The audience don’t have to do something or interact with the cast to get value from the show. There’s not an overwhelming narrative and they can make meaning of Fluffy in their own way, in their own time.”

The show, which has a COVID-safe environment and includes relaxed sessions, also focuses on the recycling process. Audiences can bring their own paper for shredding and all paper used is donated to community compost sites.

At the end of every day, Fluffy’s cast and crew must sweep away every shred of paper using leaf-blowers and enormous scissor brooms. Do audience members take paper to compost at home?

“No they don’t,” Newman says. “But they can certainly walk away covered in fluff.”

Fluffy runs until January 23 at Carriageworks.