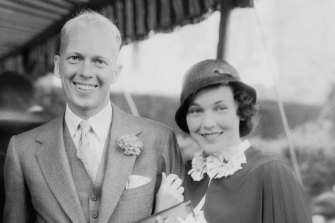 John Farrow and his actress wife Maureen O’Sullivan attend a wedding in 1933.Credit:Getty

Even in film circles, John Farrow is pretty much unknown in Australia. But almost 60 years after his death, the product of Marrickville in Sydney’s inner west remains easily the country’s most prolific filmmaker in Hollywood.

He directed almost 50 movies, produced six and wrote more than 25 screenplays – winning an Oscar – before dying from a heart attack in 1963.

Dynamic, driven and prone to telling spectacularly tall stories about his life, Farrow is part of a famous Hollywood family. 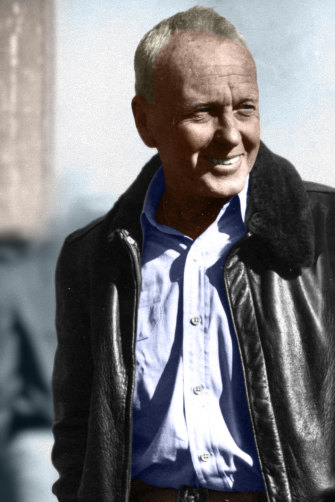 Driven, dynamic and enigmatic: Hollywood director John Farrow who grew up in Marrickville and went to sea at 15.Credit:Ronin

Outside movies, Farrow wrote eight books, including a collection of poetry and a history of the Popes. He became a Commander in the Canadian Navy during World War II. He won an OBE and a Papal knighthood. And, despite being a staunch Catholic, he was a Hollywood playboy whose romancing of a series of Hollywood actresses apparently continued through two marriages.

The fact that someone so accomplished is so little known in this country fascinated filmmakers Claude Gonzalez and Frans Vandenburg when they discovered a shared affection for Farrow’s critically acclaimed film noir The Big Clock (1948). 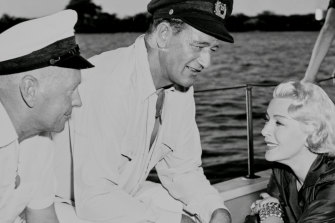 Director John Farrow (left) with John Wayne and Lana Turner on the set of The Sea Chase. Credit:Ronin

Now, after more than a decade of detective work and interviews, they reveal his brilliantly colourful life in the documentary John Farrow – Hollywood’s Man In The Shadows that is screening at the Sydney Film Festival.

“We’d always loved ’40s cinema,” Gonzalez says. “We loved The Big Clock and got into a discussion about how good and vibrant a work it was, then we found that there was really nothing written about Farrow.”

Vandenburg adds that they were fascinated to discover he was Australian and that he had made so many Hollywood movies. 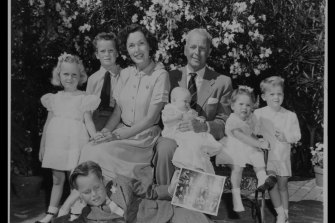 As well as directing movies starring Boris Karloff, Lucille Ball, Robert Mitchum, Lana Turner, Bette Davis and John Wayne, Farrow won an Oscar for co-writing the comedy Around The World In 80 Days (1956) after an earlier nomination for directing the war drama Wake Island (1942). 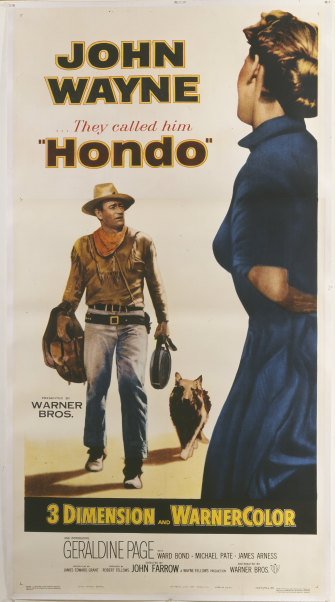 Farrow was a stylish director who told engaging stories with a constantly moving camera. Credit:Getty

Gonzalez describes him as a stylish director who told engaging stories with a constantly moving camera.

“He’s always creating a wonderful pace and energy to his filmmaking,” he says. “You can also see a humanism that is very much part of his style. He always cares about not just the hero but the secondary and the third person in the story … the unheard voice of a female protagonist or the underdog.”

The documentary shows that Farrow’s father worked for a tailor and his mother was a dressmaker until her death aged just 26, when he was three, in what was then called Callan Park Hospital for the Insane. While not diagnosed at that time , it is now thought she had post-natal depression.

While Farrow later claimed to have studied at Newington College, near his home, he really went to the more humble Newtown Boys.

According to a relative living in Engadine in the southern suburbs, 88-year-old Jim Farrow, the family talk was that John was “a rascal and a scallywag” as a child.

While Farrow later claimed to have studied at Newington College, near his home, he really went to the more humble Newtown Boys.

“He used to walk around with a white coat on and a stethoscope pretending he was a doctor,” he says. “We knew he used to exaggerate stories and that carried on after he left Australia.”

While the retired hospital courier never met his first cousin twice removed, his family research was invaluable for the documentary. 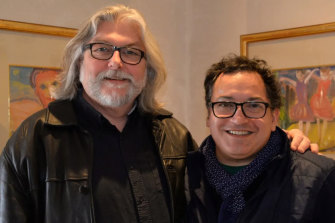 “Can you imagine making, on average, 15 films per decade?“: Frans Vandenburg (left) and Claude Gonzalez, who directed the documentary John Farrow – Hollywood’s Man In The Shadows.

Aged 15, Farrow borrowed money from his aunt and left Sydney as a crew member on the RMS Makura in 1919. The destination was Vancouver via Fiji and Hawaii.

He later claimed to have fought in revolutions in Nicaragua and Mexico before arriving in the US in 1923, though the documentary-makers believe that was a colourful fabrication. Just like his claims to be related to England’s kings, to have written an English-French-Tahitian dictionary and to have studied at Winchester College in England and the US Naval Academy.

“He just ran away to sea, had these adventures, began writing and jumped ship in San Francisco,” Vandenburg says. “That’s how he arrived in America: as an illegal alien.”

Around a year after landing, Farrow married the daughter of a mining magnate, Felice Lewin, and they had a daughter. There is a tall story behind that marriage as well. 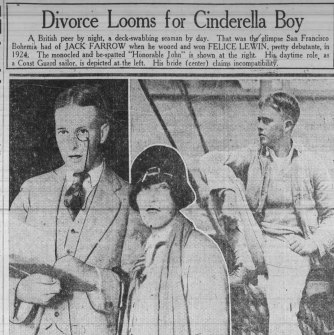 A report with the headline “Divoce looms for Cinderella Boy” about two different sides of John Farrow in The Oakland Tribune in 1927.Credit:Ronin

In 1927, The Oakland Tribune carried a story headlined “Divorce looms for Cinderella Boy” that reported “Jack” Farrow had been living a lie when he won over Lewin.

Working as a Coast Guard seaman swabbing the decks during the day, he had been wearing a monocle and spats, claiming to be a British Lord known as the Honorable John Neville Burg-Apton Villiers Farrow, to mix with “appreciative debs and dowagers” at night. She wanted a divorce on the grounds of cruelty.

Working as a Coast Guard seaman swabbing the decks during the day, he had been wearing a monocle and claiming to be a British Lord at night.

Arriving in Los Angeles that same year, Farrow started to gain recognition as a poet and short story writer. He worked as a script consultant and caption writer on silent seafaring movies then graduated to writing dialogue when “talkies” began. 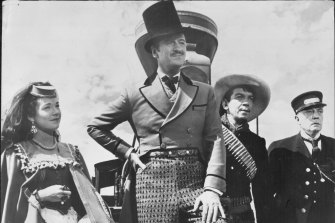 David Niven in Around The World in 80 Days: John Farrow won an Oscar for co-writing the screenplay but was sacked as director.Credit:Fairfax Media

“He met the right people,” Vandenburg says “He was advised to go down to Hollywood, which he did. It was perfect timing during the transition from silent to sound.”

Farrow made another colourful newspaper story in 1933.

The Daily News reported that he had been threatened with deportation for “moral turpitude” after being arrested while dancing with Argentinian actress Mona Maris at the Cocoanut Grove nightclub. 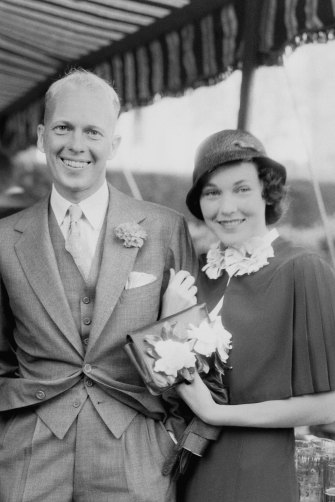 The paper added that Farrow, who had previously been engaged to actress Lila Lee, had been “advised to quit” the US two years earlier over his questionable residency permit. He left for Tahiti and England then returned with papers declaring he was “an assistant consular attaché to one of the Balkan countries”.

Described in court as a screenwriter and actor, Farrow was given five years probation instead of being deported. He eventually became an American citizen in 1947.

These lively interludes did nothing to stop Farrow’s rise as a filmmaker. After all, he was not alone in reinventing his past among the immigrants in Hollywood.

“A lot of figures including Errol Flynn and Merle Oberon would recreate or reshape their lives,” Gonzalez says. 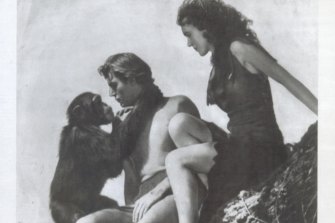 Pivotal movie: Johnny Weissmuller as Tarzan and Maureen O’Sullivan as Jane with Cheeta the Chimp in Tarzan Escapes.Credit:Reuters

“When we checked, a lot of these things were proven false, but he was a great fabulist. He not only wrote good stories, he wrote good copy for his own life.”

Author and critic Scott Murray says Tarzan Escapes (1936) was a pivotal movie for Farrow – it was his first movie as co-writer and he met then married O’Sullivan after converting to Catholicism.

He soon directed his first movie, the Caribbean crime drama Men In Exile (1937), focusing on what were intended as second-string attractions in double bills. He had a surprise hit with plane-crashes-in-the-jungle pic Five Came Back two years later.

When World War II broke out, Farrow enlisted in the Canadian Navy and reached the rank of Commander before being shipped out with typhus in 1941. He returned to directing when he recovered – making A-grade pictures for the top of the bill now and quickly succeeding with Wake Island. 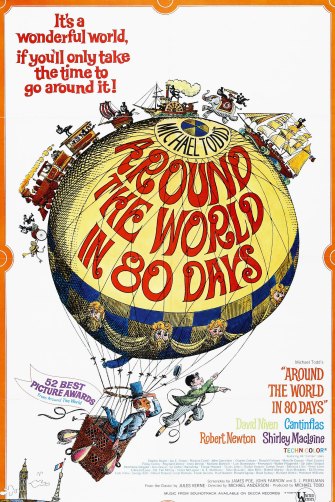 Poster for ‘Around the World in 80 Days’.Credit:Getty

Farrow started directing Around The World In 80 Days until the famously brash producer Mike Todd sacked him, apparently over how long he was taking to shoot the movie. It went on to win five Oscars, including best picture.

His son, John Charles Farrow, says in the documentary that Farrow told his children and others that they were directly related to the kings of England.

“It was important to people at that age and in his profession to have a polished side to them,” he says. “The raw and the rough of Australia wasn’t in style at that time.”

The documentary makers had no luck interviewing Mia Farrow – not surprising given the continuing controversy around former partner Woody Allen and their children.

“We wrote to all the family and they all responded differently,” Vandenburg says. “Mia was very private in her exchanges because she had a lot of her own issues going on. All families are dysfunctional, I suppose, but theirs is a little bit more tragic.” 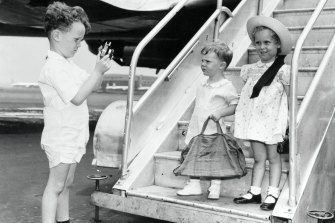 Farrow children prepare to fly to a film shoot in Ireland where their parents are working in 1948, from left, Paddy, 5, John, 21 months and Mia, 3.Credit:Getty

Gonzalez adds that Farrow died when his children were adolescents, leaving them without “a very dominant, very dynamic father at an important time in their lives. But our agenda was giving John Farrow a voice: who was he as a person, what made his films so compelling and why should they be reassessed?”

But Mia did appreciate one discovery during production – the unmarked grave of her grandmother, John’s mother, at Rookwood cemetery.

When Jim told her the news, she paid for a plaque. “She was delighted and wanted to place a memorial to her grandmother on the grave,” he says.

It reads in part: “In loving memory of Lucy Farrow. Death came before you could know your baby John”. 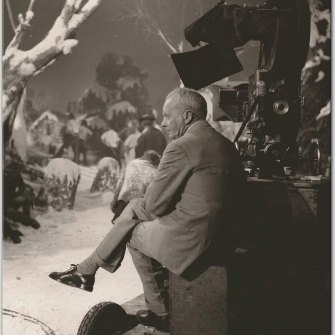 John Farrow on the set of his last film.

While some of Farrow’s best-known movies are being released on DVD, they are not streaming. “We hope with the documentary that more of his movies might become available,” Gonzalez says.

So how did Farrow pack so much into his life?

Gonzalez says two of his children described him as an insomniac who was constantly on the go.

“As filmmakers, we know how difficult it is to make a film,” he says. “Can you imagine making, on average, 15 films per decade? It’s an incredible amount of work, plus writing these books and also having affairs with some of the leading ladies of the time.”