The old vans being transformed into Insta-worthy holiday getaways

She’s only 17 and isn’t old enough to get her licence yet. But that’s no biggie for Jade Purdon, who, like many other DIY rookies around Australia, is spending the pandemic converting her beloved van into a future freedom machine.

The year 11 student, from Sale in Victoria, used savings from a part-time job to buy her $5500 Ford Econovan about five weeks ago. 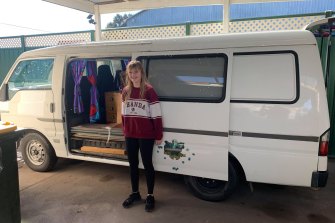 A overseas gap year was on the cards for Jade Purdon next year, but the pandemic inspired her to search for local alternatives.

“I’m still very young, I’m in school and stuff so everyone thinks it’s a bit weird,” she laughs.

Jade says she has become very productive during remote learning, cramming her schoolwork into a day or two per week.

With the guiding hand of her supportive dad – combined with YouTube videos and online research – Jade is happily spending the rest of the time converting her 2004 model van on a shoestring budget.

Jade says a gap year overseas had originally been on the cards, but COVID-19 got her thinking – and scrolling – for local alternatives.

“I saw it (the concept of #vanlife) on Pinterest and TikTok. I was like that is so cool – imagine being so free and just being able to do that,” she says.

A plan was hatched to drive the van around Australia after high school.

The teenager says the van project has been a huge help in battling lockdown boredom. “It’s so lonely, so you really need to have something to do.” 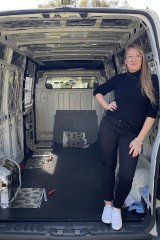 Being out of work has given Sarah Turner one silver lining – plenty of time to get on the tools.

Australians have taken up DIY van conversions in droves recently, with the demand also leading to a spike in sale prices.

On Facebook page Vanlife Australia, member numbers have skyrocketed during the pandemic, according to Dr Raymond Forghani, who helps run the page.

“This time last year the group had around 7600 members – now we’re more than 40,000,” he says, putting the growth down to factors including international travel restrictions, housing affordability and a shift to working remotely.

For some, like camera assistant Sarah Turner, who lives in Melbourne’s Newport, being out of work during lockdowns has provided one silver lining: plenty of time to get on the tools.

The 43-year-old, who bought a Renault Master van a couple of years ago for work, is spending her days transforming it into a vehicle she can also travel in.

“There are only so many shows you can watch and only so many coffees you can walk to go and get, so it’s a good distraction,” she says. “And it’s enjoyable seeing something come together that you’ve built yourself.” 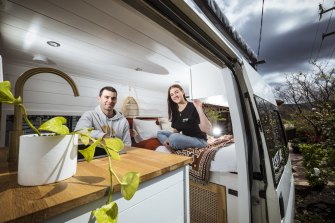 She says she is a “fairly technical person”, having studied both architecture and photography before winding up in the film industry.

Turner plans to travel to Central Australia and Queensland in the van next winter with her partner. Her parents will join in their camper trailer.

On van rental platform Camplify, the number of newly renovated vans listed jumped 150 per cent in June, compared to the same time the year before.

Melbourne couple Sarah Parker, 21, and Mason Kirby, 24, are among those listing their vehicle for rent when they’re not using it.

Over six weeks, they transformed a Ford Transit van into an Insta-worthy holiday getaway vehicle. 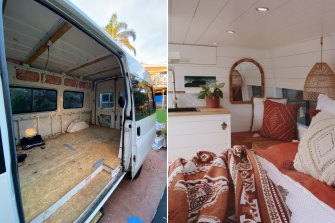 A before and after of Sarah Parker and Mason Kirby’s van.

Kirby, a former landscaper with a variety of trade skills, says the project was a “saviour” during lockdowns. “If we’re lost for something to do we’ll just go out to the van and just tinker on it for an hour, two hours.”

Parker says they’ve made plenty of mistakes along the way, and their best advice to others is to spend lots of time planning. 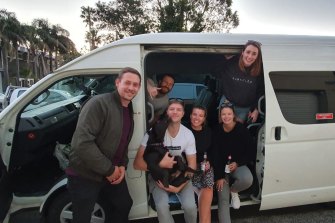 Rose Freeburn and her friends were inspired by a road trip they made up to Byron Bay last year.

In Sydney’s Bondi, Rose Freeburn, along with her partner and two other couples, spent a happy eight weeks or so doing up a van together, which they also rent for some of the time on Camplify.

Freeburn, 25, says the group was inspired by a road trip up to Byron Bay in-between lockdowns in August last year.

Two weeks later, the group of six had bought their own Toyota HiAce.

Freeburn says renovating “Rollie” gave the tight-knit group – five of the six are British – a shared purpose during “some pretty bleak weekends”. 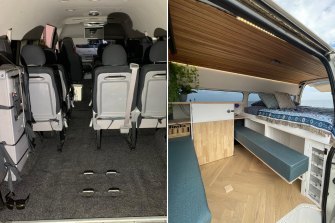 Before and after shots of the ‘Rollie’ Freeburn and her friends fixed up.

They haven’t ruled out renovating more vans down the track, so they can all go away together, she says.

“But we need the HiAce market to drop down a little bit – honestly it’s hotter than Bitcoin at the moment.”