It is a sobering moment for anyone to pass the age at which one of their parents died. All the more poignant, the younger you lost them. This is now Prince Harry’s experience. Yesterday was his 37th birthday and perhaps a salutary one; topped off by being lauded as one of Time magazine’s “100 Most Influential People of 2021” alongside (or should that be one step behind?) his wife.

Harry was, of course, only 12 years old when Diana, Princess of Wales died 24 years ago, aged 36, and the impact changed him from being an adorable, mischievous boy who was just beginning to comprehend what it meant to be third in line to the throne – forever one large step behind his big brother – into an impulsive teenager seemingly on a mission to self-destruct. 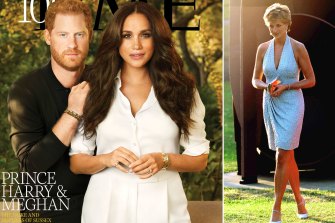 On Wednesday, Prince Harry celebrated his 37th birthday. He is now older than his mother ever was.Credit:Time, Getty

Undoubtedly, what saw him through that period to become the devoted husband and father-of two he is today has been his firm belief that his mother is still looking after him, somewhere, advising him how to move forward and approving when he has done the right thing. It was so much at the forefront of his mind that he told me in 2018, before Meghan Markle came on the scene, that the most important thing Diana did for him was to “keep me safe” – and how it would be a priority for him to do the same for any children he might have.

“It’s really quite common for people to get incredibly anxious on some level about approaching the age at which their parent died,” says Lola Borg, a psychotherapist based in London. “It’s a massive milestone [and it’s] often manifested through concerns about their own health.” There may be the expectation, even if only subconsciously, “that because their parent didn’t survive, they might not either.”

The moment can be even harder “when they are a parent themselves”, she adds, as Harry is now. “Usually, what I see in my clients is more anxiety about their children’s health, how safe they are, and anxiety about leaving them in the same position.

“The way Harry’s mum died was very sudden, tragic and public, and he was terribly young. That’s never a great combination. His life changed overnight when he was 12. When you lose your mother that young, it sets up an awareness that life can change very suddenly… I don’t know what’s going on in Harry’s head, but it’s interesting that as he approached this milestone, in the last couple of years, he upended his life.”

“It’s interesting that as he approached this milestone, in the last couple of years, he upended his life.”

Prince William, who is two years older than Harry, of course suffered the same devastating experience of losing his mother young. But he has different characteristics to his brother and made it clear that he was determined her death “will make me, rather than break me”.

Harry’s life, in contrast, sometimes seemed like a catastrophe waiting to happen, risking bringing shame on the Royal family. Some might argue, his and Meghan’s outpouring to Oprah Winfrey and his subsequent series with the chat-show host about mental health, in which he criticised the royal’s cycle of “genetic pain”, seemed to do exactly that.

“Grief changes as one gets older,” says Borg. After the shock comes acceptance, and a keen awareness of one’s own mortality. “When people become aware that one day they’re going to die, they often change their behaviour – so they might look at their life and think: ‘What am I happy with? What do I need to change?’ ”

Diana remains freeze-framed in Harry’s mind as a young woman of 36 – the same age, incidentally, as Meghan was when he and she got engaged – and perhaps in some ways he is still trying to remain a good boy in her eyes. It clearly still comforts him to believe that Diana is somehow in touch and aware of what he does, especially when it involves causes she cared about. “I instinctively know what my mother would like me to do,” he told me when we talked in 2018. Subsequently, he stated that she would be “jumping up and down” at the news of his engagement, “looking forward to being a grandmother” and that she and her daughter-in-law would have been “best friends”.

During the couple’s interview with Oprah he even suggested his mother had foreseen he would leave the Royal family and left him money to help make it happen. “I think she saw it coming and she’s been with us through this whole process,” he explained.

But now Harry is older than his mother when her life ended. He has a new life before him as a husband and father, and thanks to his royal connections has every opportunity ahead.

He also has a fulfilling marriage, which his late mother never had, something that should, but doesn’t always seem to, give him a more positive outlook on life. He was 33 when he married, so has had more experience of the ups and downs of life than his mother, who married Prince Charles when she was just 19.

He has more control over the upbringing of his two children, Archie, aged two, and Lillibet, three months – and more freedom, too. He and Meghan don’t have to conform to royal protocols and can define their own values and timetable. He has the same parental responsibility that his mother had, but much more freedom. Harry believes similarly to his mother in the power of “service” helping those in need and basing his goals on her humanitarian legacy. One difference is that Diana never lectured the public or invited charges of hypocrisy for telling us what to do while excusing herself from the same responsibility. She also brought up both boys to have a sense of duty and respect for the monarchy.

The second most important thing Harry told me his mother did for him “was protect me from the media and escape from them”. Here, he has made significant moves and used specific journalists, some friends and especially social media to promote his and Meghan’s activities and their views about the Royal family while keeping the tightest control of their privacy.

Prince William has found a very different way to cope. In Catherine, Duchess of Cambridge, he has a wife with an optimistic, positive nature who supports him while also finding a role for herself, especially in supporting young children across the country who have had little chance in life. She has even successfully dealt with the pressure and expectation of press photographers by learning how to take photographs herself and passing over the most lively and endearing ones of their children for the press to use, cutting down media intrusion.

In recent years, William, now 39, has also openly blossomed as a husband and father whose children, Prince George, Princess Charlotte and Prince Louis, openly show they love their father as much as he adores them.

“Clinically, I’ve noted huge anxiety, and the memories of the death becoming more prominent, as the child’s age approaches the age the parent died,” says The Telegraph’s psychologist, Linda Blair. “And afterwards – sometimes immediately – a sort of sense of relief, or closure, once the date passes, and the child has become older than the parent.”

The key question is: will this landmark birthday be the moment Prince Harry does the same, makes peace with the scars of the past, and finds the confidence to look forward?