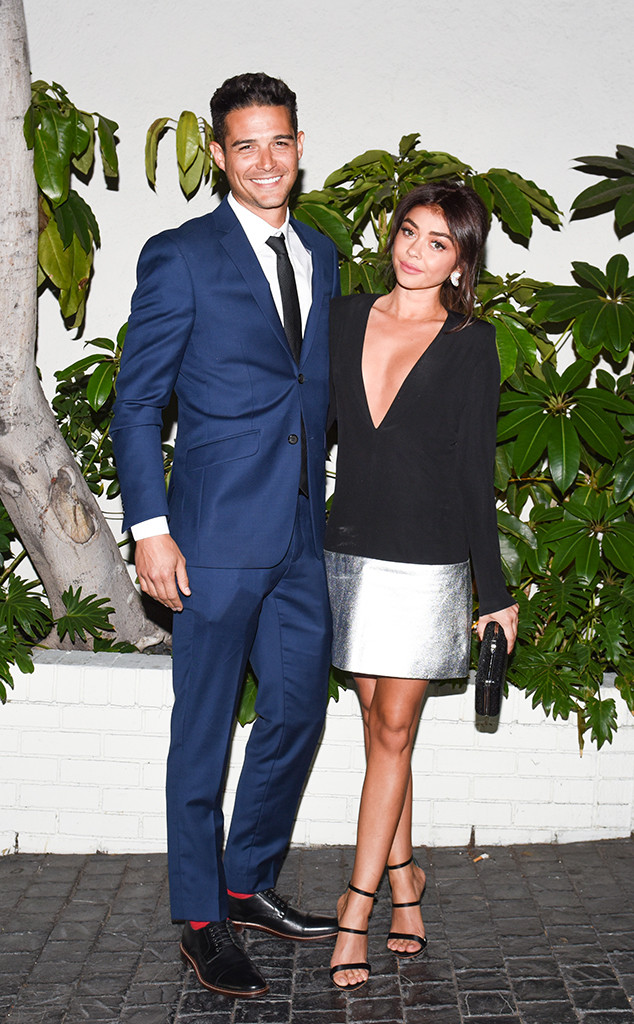 The duo of nearly two years announced their engagement on Tuesday night and, now, are relishing in their new titles. “She said yes, which was surprising, I think, to everyone involved,” Wells joked on his podcast Your Favorite Things with co-host Brandi Cyrus. “Real touch and go there.”

Or not so much. Though The Bachelorette alum, 35, tried to throw off the Modern Family star, 28, she knew a proposal was coming. “I think she thought it was happening and then right before we left, I was dressed pretty frumpy,” he recalled on the latest episode. “I was like, ‘Is this t-shirt OK?’ And she was like, ‘You’re wearing a t-shirt?’ That threw her off a little bit. Listen, Sarah’s a smart girl. She knew what was happening.”

While on vacation in Fiji, he took her to a private island nearby, got down on one knee and presented her with an oval cut Lorraine Schwartz sparkler, which he kept hidden in his drone. Also hidden: a photographer, ready to capture the moment.

As it turns out though, the most nerve-wracking part was simply getting the one-of-a-kind ring across the world.

“Guys, for the most part, are not used to having expensive pieces of jewelry around them,” Wells said. “So, it freaks us out just in general. Also, for me, we were traveling across the ocean, so that’s even more stress of like, ‘What happens if someone steals my bag or something?'”

“Everyone is like, ‘Are you so happy?’ And I was so happy but I’m also so happy I’m not in charge of that very nice ring,” he joked. “There’s too much pressure!”

That can't eat, can't sleep, reach for the stars, over the fence, world series kind of stuff ✨❤️ @wellsadams

They’re not, however, feeling any pressure to say “I do” just yet.

“We haven’t figured out anything,” Wells told Brandi. “Phase 1 was just, like, get engaged. We’re still in Phase 1.”

Which is the rosiest place to be.

“That can’t eat, can’t sleep, reach for the stars, over the fence, world series kind of stuff @wellsadams,” the actress wrote on Instagram alongside a collage of photos. Commented Wells, “It takes two! Well 5 including the doggos! Love you more bab….fiancé!”

Congratulations to the happy couple!