My partner and I are celebrating six months together this weekend but it's only in the past week that one of his habits has threatened to disrupt the new-love bubble in which we have existed since we each swiped right. 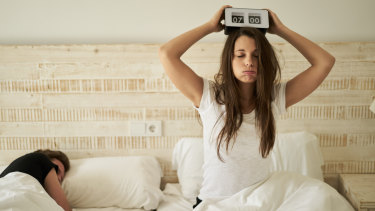 If you’re sleeping with a snoozer, chances are you have felt like this.Credit:iStock

On the nights he stays at my apartment, he has to set his alarm early enough to go home, walk the dog and prepare for work.

Except, in the past week I have noticed that when the alarm goes, usually between 6am and 6.15am, he doesn't move.

"You're a snoozer, and I am not a snoozer," I eventually drummed up the courage to tell him.

He pledged to reform his ways, either by getting up or getting real. But the episode, minor as it is in the scheme of things, got me thinking about the things we only learn about our partners after six months, and the things everyone should know before they get serious with someone. 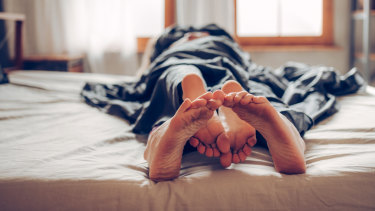 The first few months of a relationship are about having fun but it’s important to deal with some of the bigger issues before things get too serious.Credit:iStock

Fortunately for us, two people in their 30s who have previously been married and divorced, "the chat" (shorthand for marriage/family/money/football teams) happened quite early on. But many couples I know of wait months, or even years, before they broach life's trickiest subjects. I've made that mistake, and let me assure you, it doesn't end well.

So what subjects should you have tackled by the three or six-month mark, and what things are best asked on a first date?

Relationships expert and psychotherapist Melissa Ferrari says it's never too early to ask some meaty questions, especially why the other person wants to be in a relationship at all.

"The answer to that question may tell you if you are on the same page," she says. "Some people may want to have children, to build wealth, or property. For some, the safety and security of having a relationship isn't the most important thing. Some people have agendas."

Once you've established some correlation on the big picture, Ferrari suggests talking about some more serious issues at the three-month mark, once it's clear there's a path towards a future.

She calls this the "aligning" period, where so-called red flags and deal breakers may emerge that may give either person pause to consider if they want to invest further in the relationship.

This is a good time to ask about how someone feels about marriage, if indeed they want to marry, and whether they eventually want to live with their partner.

"You get to a point where it can feel a little threatening if you don’t know your partner really well," Ferrari says. "Those can be things around values, morals and ethics.

"How you think about things like parenting, how to be a good citizen, the environment, family – how as a couple you would manage your respective families."

Nothing here about alarm clocks.

By six months, Ferrari says it's important to have some serious conversations not to stifle fun but to actually foster it.

"Keep those conversations friendly and light but important," she says. "Let the other person know that you’re asking questions that are serious but reassure them it's about preserving the partnership."

Ferrari says it's a good idea to see a therapist together as a couple, even for one or two sessions, to see if you're on the same page.

"If you're going to 'do life' together you have to learn how to do this," she says. "We invest in property, we go to solicitors and get advice. Relationships need to be taken as seriously. You don't have to make it boring or not fun. It’s actually going to create the safety – when you feel safe you have more fun … and feel more connected."

And, in my case, hopefully more refreshed – after 15 minutes' extra sleep.