A survey of memorable Oscars moments ahead of Sunday’s show

Oscars swag returning in 2021 with $60K gift bags for celebs

Cindy Adams weighs in on the 2021 Oscars

Maria Bakalova — the first Bulgarian ever nominated for an Oscar, for her supporting role in “Borat Subsequent Moviefilm” — stole the show right from her audition for star Sacha Baron Cohen.

In June 2019, Bakalova was flown to London from her hometown of Burgas to try out for the role of Tutar Sagdiyev, the daughter of Baron Cohen’s character.

The project was shrouded in secrecy as four Eastern European hopefuls were put to the test with real subjects who had no idea what was going on (much as would later happen in the film).

“We hired a big house for the day, this grand house near Parliament in Westminster, and these four actors improvised questions as a test to see how good they were going to be acting with real people and not getting spooked by it,” Andrew Newman, CEO at Baron Cohen’s UK production company, told The Post.

“We had [the actors interact with] this family who thought they were taking part in a casting for a TV show about fish-out-of-water Eastern Europeans living in Britain. And Maria was brilliant.

“The people who owned the house had a dog cage and she got in the dog cage and started drinking from the water bowl. This British family was probably thinking ‘What the hell is this?!’” he said.“I thought, ‘She’s got balls of steel’ … she was just excellent and had absolutely so much courage. Nothing fazed her.”

Because there was such secrecy surrounding the movie, Bakalova, now 24, was skeptical of ulterior motives at her initial meeting before going to the house.

“Maria was quite scared that this was all sex trafficking at first,” Newman recalled, as Bakalova didn’t know what the movie was or that she was meeting with Baron Cohen.

In fact, the actress was so worried that she asked her friend and manager Julian Kostov to wait outside her first meeting. She planned to tape the audition and, if things got worrying, pass the phone out to Kostov for evidence.

Even her own mother, Rumyana, was concerned.

“It just wasn’t believable it was a real casting,” she told The Post. “It’s good that Maria trusted her intuition and took risks and threw herself into this adventure, because, as a mother, I was afraid that … she would be deceived, hurt. I even tried, I admit, to divert her.”

Instead, she ended up meeting with Baron Cohen. Writer and producer Dan Swimer, a longtime collaborator of the comedian, said Bakalova was a dream come true for both of them.

“We were thinking that perhaps we’d set ourselves an impossible challenge — to find an incredible young female actor who speaks an eastern European language fluently, can hold her own comedically alongside one of the greatest comic performers ever, is brave, believable, can improvise and is completely unknown to our audience!” Swimer told The Post.

But he and Baron Cohen knew they’d found their woman when Bakalova read the scene where Tutar tells her father, Borat, that she’s breaking off on her own.

“Her performance was hilarious and moving and real. Everybody in the room felt it. There were shivers, and perhaps even a few tears,” Swimer said. “And then she left home, grew out her body hair and came on the road with us for a year!

“She’s bonkers and hilarious but she’s also an experienced and very professional actor so she didn’t need somebody to hold her hand through it.”

“What this British family didn’t realize,” Newman added of the unwitting audition participants, “was that they had taken part in something that led to the creation of a well-deserved Oscar nominee.”

Growing up in the small Black Sea coastal town of Burgas with her mom Rumyana and father Valcho, Hollywood was a world away.

She studied acting and flute at the Bulgarian National Academy for Theater and Film Arts. “I started dreaming that I was arriving in Los Angeles, rolling my suitcase down those iconic palm tree-lined streets, with the Hollywood sign in the background, and I was telling myself, ‘I’m going to be a great movie star someday,” Bakalova told Deadline.

“As a child, she … painted the street with palm trees and the Hollywood sign,” her mother told The Post. “Her notebooks, blouses were all with this inscription!”

But then, “I told myself, these are just childhood dreams. There haven’t been any big Hollywood stars from Eastern Europe.”

But Bakalova’s tiny part in the Bulgarian movie “The Father” had been noticed by casting director Nancy Bishop, who asked her to send in an audition tape for what would turn out to be the “Borat” sequel. 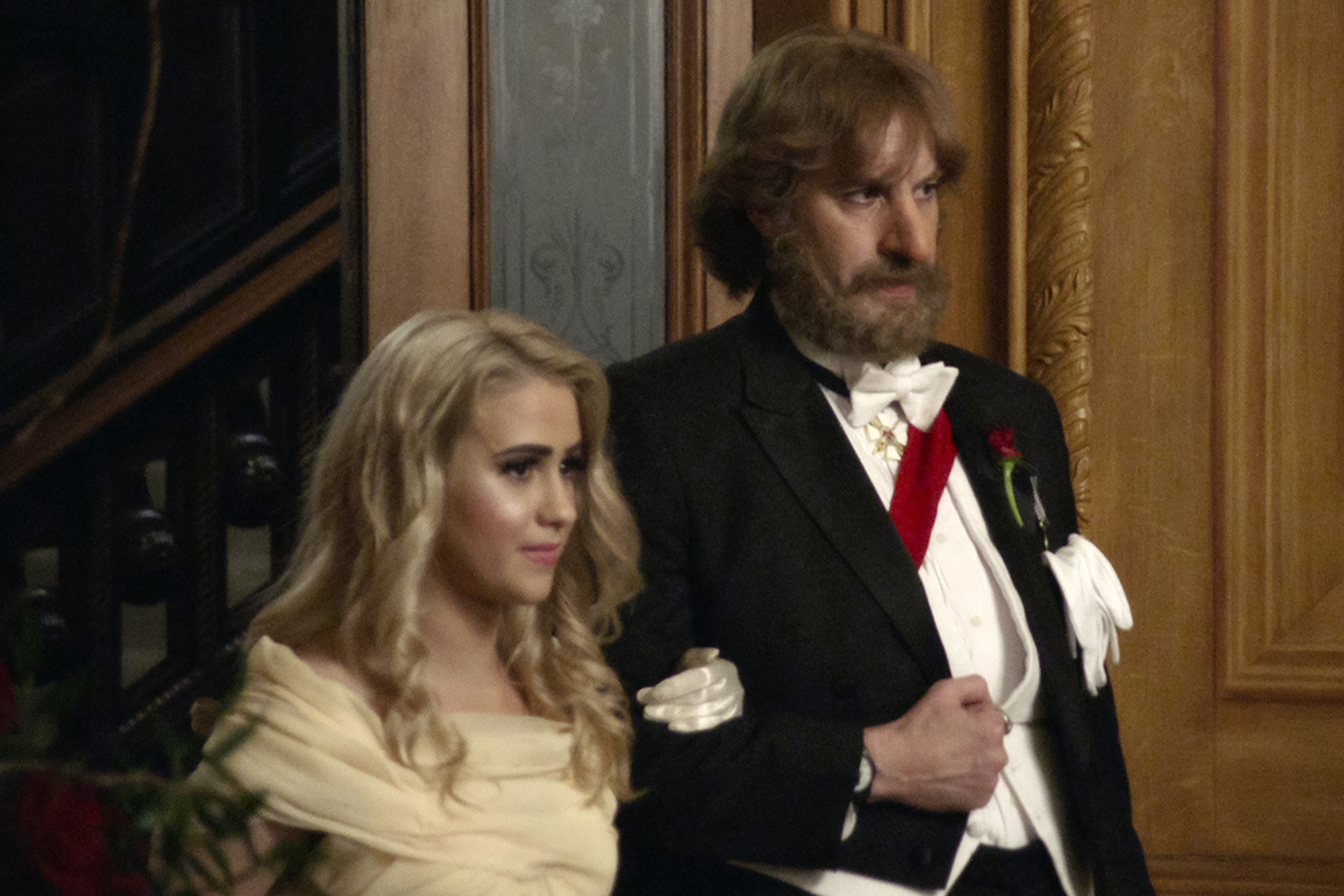 Just weeks after her 2019 graduate performance showcase, Bakalova self-taped her try-out — at 5 a.m., after coming home from a party.

“All the Los Angeles producers thought Maria was brilliant, but she turned out to be even better than anyone could have probably imagined,” said Newman.

Once she landed the part in “Borat,” Bakalova was taken on a filming journey across the US. In the largely unscripted, improvised film, Borat and 15-year-old Tutar travel a circuitous route from Texas to Washington, DC, with the intention of presenting Tutar to Mike Pence for marriage.

Along the way, the actors ended up in perilous real-life situations — including at the pro-gun March for Our Rights in Olympia, Wash., where Baron Cohen was chased off the stage while in character. Bakalova was at the rally, too, posing as a reporter.

She also infiltrated the White House while in character, chatting to Donald Trump Jr. and coming within feet of President Trump.

And of course, as Page Six first reported, Bakalova ended up alone in an NYC hotel bedroom with Rudy Giuliani as he lay down on a bed and appeared to put his hands down his pants in a moment that broke the Internet.

But her mother felt good knowing Bakalova was with Baron Cohen.

“Sacha is great,” Rumyana said. ” While this movie was being made, through all the lockdowns and pandemic, during this [time] which I could not be with her, he … made me feel calm. She relied on him and the whole wonderful team of ‘Borat.’”

Jeanise Jones, a 62-year-old grandmother from Oklahoma, was one of the people duped into appearing in the movie — hired as a “babysitter” for Bakalova’s character and, in the process, becoming the unwitting moral compass of the movie, telling the innocently offensive Tutar to stand up to her father.

“[Bakalova] was a very nice, sweet young lady. She had me fooled,” Jones told The Post. “She played that part very, very well.”

Jones, who was found by producers through her church, knew nothing of what the film was truly about until her cousin told her she had become an online sensation.

“Maria called me once it came out and we talked for a long time,” Jones recalled. “She said she wanted to tell me [during filming], but it was a secret.”

In one unscripted scene cut from the film, Jones and Bakalova went to Bricktown, Okla., where Bakalova caused chaos as she called out to a group of guys sitting outside a bar: “Do you want me … do you want me? Why don’t you want me?” before she was told to leave by a bartender who thought she was a prostitute.

“All I know is that they thought we were doing something shady and didn’t appreciate it,” said Jones. “They felt we were soliciting.”

Bakalova now calls Jones her “godmother” and plans to go to visit her as soon as she can, Jones said, adding: “I know she wants to see me and I definitely want to see her.

“I know for people from Maria’s country it’s not that possible to make it big, which is why I’m so happy for her,” Jones added.

It didn’t take long for Bakalova to capture critics’ praise and the attention of Hollywood. She won the Critics’ Choice Movie Award for Best Supporting Actress and nominations for a Golden Globe, Screen Actors Guild award and BAFTA.

She’s now been signed to the talent agency CAA, which represents everyone from Tom Cruise to Tom Hanks to Baron Cohen, and recently filmed “The Bubble,” a new movie with director Judd Apatow. She was shooting a scene on set opposite Pedro Pascal last month in London when she found out she had landed her first Oscar nomination. 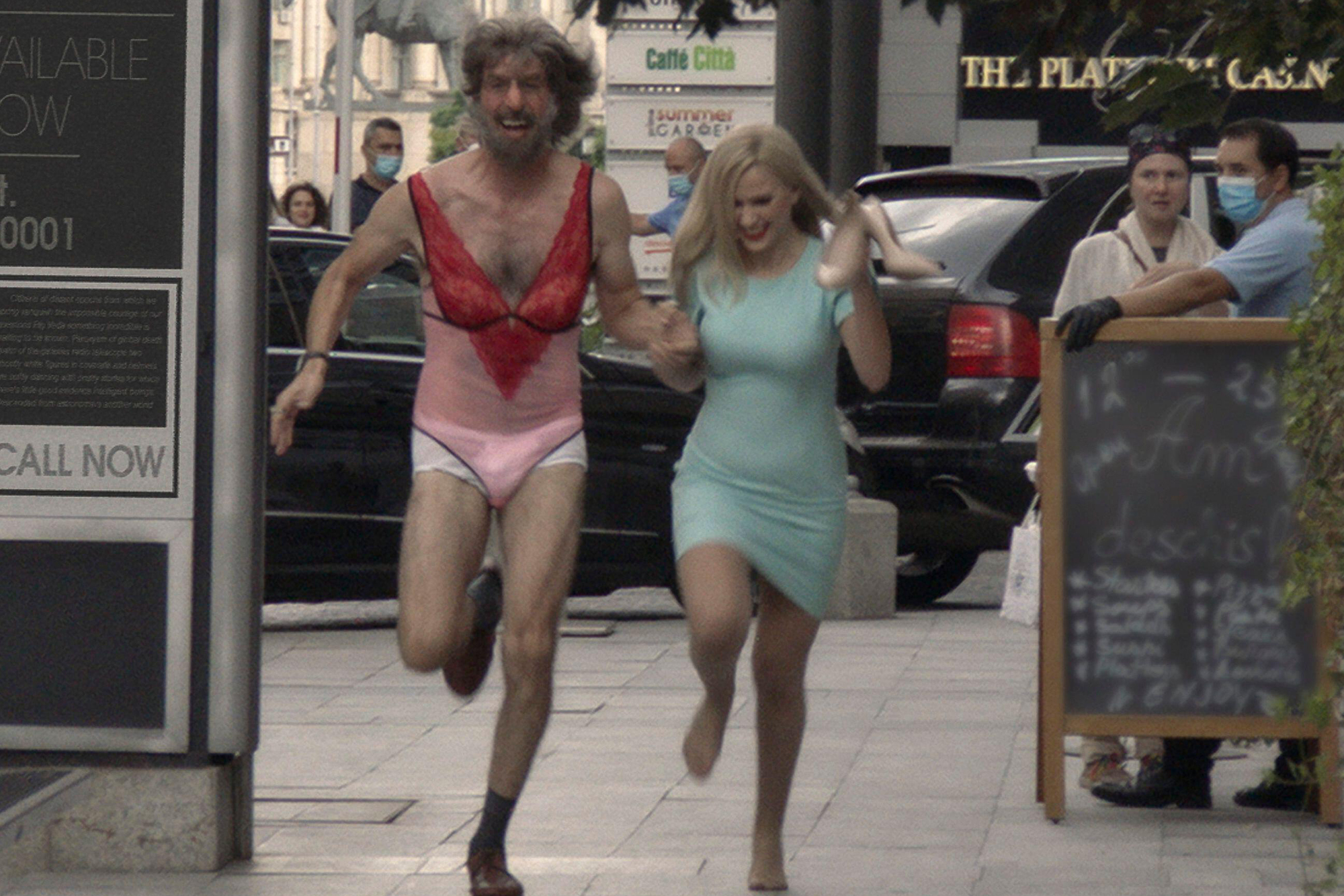 “We were in the middle of a take,” she told Variety of the moment when Apatow stopped the cameras to tell her she’d been nominated. “I was like, ‘Oh, did I do something wrong?’”

(Bakalova may have landed another perk via CAA: the Daily Mail in December ran photos of her cozied up to Cade Hudson, an agent at the company, on Miami Beach.)

Bakalova had hoped that her mom could join her at the awards, which will be held live and in person at Los Angeles’s Union Station on Sunday. But, Rumyana said, she was not able to obtain a visa.

Instead, she added, “Her father and I will support her and watch her on TV. I feel proud of my little girl who managed to fit in and compete with great, established, famous actresses. With all these nominations, she is already a winner!”

It was also recently announced that Bakalova has won another big role, in the slasher film “Bodies, Bodies, Bodies.”

Casting director and producer Bonnie Timmermann, who has nurtured stars including Meryl Streep and Scarlett Johansson, told The Post that Bakalova should have a big career ahead of her — and won’t be typecast as a result of the “Borat” sequel.

“Her performance in Borat was quite brilliant and very brave,” Timmermann said. “If she has smart people around her who bring her material that can show off her talent as opposed to giving her the same roles again and again, I think she will do very well.” 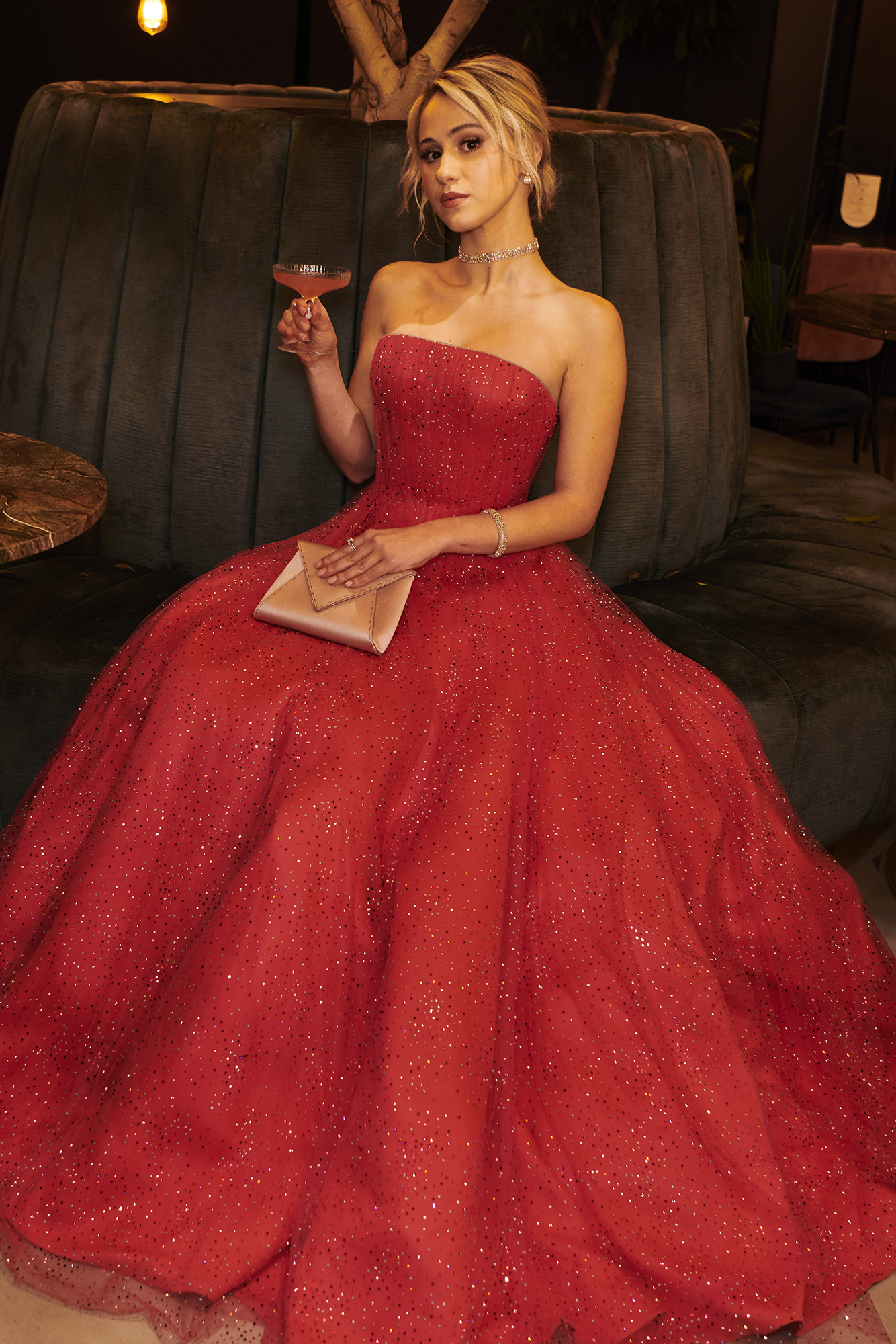 Now living in Los Angeles, Bakalova is fulfilling her childhood dreams. But the most meaningful change, she told Deadline, is her new ability to open the door for other underrepresented Eastern European actors. “That has been the most gratifying thing, giving people hope that it is possible. That if you give it your all, it could happen to you. Why not?”