This Spider-Man is the superhero we need right now

One of the challenges facing Marvel’s Cinematic Universe is how to keep its burgeoning battalions of superheroes in regular employment.

Its main solution is to turn most of its movies into team efforts with The Avengers leading the pack, but Spider-Man has long been a loner, partly because he has led much of his screen life as the property of Sony rather than Marvel. Only in 2015 did Sony do a deal enabling him to join the Marvel pantheon. Now he straddles both realms, mingling with The Avengers while still eligible to keep in touch with his former friends and enemies, alive and dead. In this narrative neighbourhood, resurrection is never a problem. 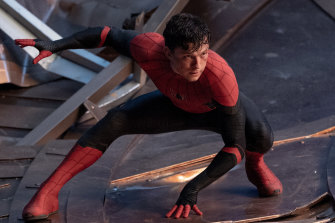 Spider-Man: No Way Home is the third instalment in a trilogy born after Tom Holland took over the role in 2015 and it picks up straight after the last one. Peter Parker’s identity as Spider-Man has been blown by the conjuring deceiver Mysterio (Jake Gyllenhaal). And he’s seeking help from Dr Stephen Strange, played by Benedict Cumberbatch, sonorously rejoicing in Strange’s status as a Master of the Mystic Arts. One of two of these arts, Parker reasons, could well be useful to him in retrieving his anonymity.

Yes and no. In the attempt, Strange accidentally opens a portal to the multi-verse and super-villains come flying in from their various dimensions to do their worst. They include Electro (Jamie Foxx), Sand Man (Thomas Haden Church) and Green Goblin (Willem Dafoe). Each cemented their reputations as monsters in movies made when the first Spider-Man, Tobey Maguire, and his successor, Andrew Garfield, were wearing the suit. Now they are back in force. 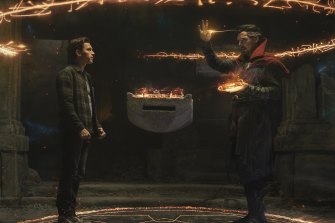 Superhero movies tend to get into box-office trouble when they take themselves too seriously without achieving the moral heft needed to elevate them into myth. Marvel’s chief, Kevin Feige, has skilfully avoided for much of his time at the studio with movies that maintain a neat balance between levity and gravity.

But none of his directors manage it as blithely as Jon Watts and his collaborators, the screenwriters, Chris McKenna and Erik Sommers. These two have written the scripts for all three of Tom Holland’s outings as Spider-Man, taking their cues from the bumbling that comes from Peter’s efforts to reconcile his obligations as a super-being with his desires to behave as an unremarkable adolescent eager to pursue his romance with his fellow student, MJ (Zendaya).

Cumberbatch sets the film’s tone in the early scenes. His commanding air comes with a healthy sense of the ridiculous and his wizardry is conducted with a winning matter-of-factness. The villains, too, get their chance to be funny, which makes sense given the calibre of the actors playing them, and the action is entertainingly tempered with sequences that have them bantering, bickering and exchanging unlikely confidences about their past lives.

Watts and his writers also take a risk by spoofing the series itself, planting inside references best appreciated by well-informed fans. It’s a form of breaking the fourth wall, inviting the audience in to share a joke with the actors, and verges on parody. Yet somehow they carry it off without diluting our sense of involvement with Peter and those he loves. They have all come back for this instalment: Marisa Tomei’s Aunt May, her friend, Happy Hogan (Jon Favreau) and Peter’s classmate, Ned (Jacob Batalon). And the affection they share is poignantly realised, no matter how ludicrous the surrounding circumstances.

It’s set in New York and a spectacular selection of the city’s major landmarks, along with a substantial percentage of its citizens, are damaged in the rampage that follows the super-villains’ arrival. It’s ingeniously devised and expertly choreographed.

After all this time, that goes without saying. But what makes these films work is Holland’s awkwardness when he’s not actually in the air. He really does look as if greatness has been thrust upon him and he’s still working out what to do with it. And it’s this perpetual state of bewilderment that makes him so appealing.