Three miracles: how you should read the NGV’s radiant new acquisition

One mustn’t complain that Lavinia Fontana’s Mystic Marriage of St Catherine, just acquired by the NGV, is a rather small picture. 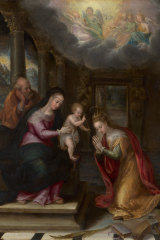 As modest as its scale may be, the picture represents three miracles: first, the ostensible content of a saint who marries the baby Christ; second, it was painted and signed by a woman during the Renaissance and, third, we own it. To add to the wonders, the NGV already has a work by the artist’s father, Prospero.

Though small, the painting is daring. It has a strong diagonal running through all the faces and Catherine’s back, reinforced by the entablature of a temple plunging downward to an open doorway, and only slightly offset by the leaning bodies of the holy family and Catherine’s thigh.

Above the main scene, with its pious genuflexion and blessing, there’s a burst of angels that dispels the gloom of stone and leaden clouds. This radiance in yellow and lilac and orange is unusual in Renaissance painting, as is the indistinctness which ghosts the seraphic musicians, almost as if they’re as feathery as the bright misty billows they sit upon.

The religious content of the picture is no less engaging. Catherine is shown in the act of marrying a baby, which we understand through a rich hagiographical tradition, the Latin urtext which Hermann Varnhagen established in the 1920s.

Catherine refused all suitors and would only settle for perfection. She meets an unnamed priest (vir sanctus) who encourages her to marry Jesus as the only possible candidate.

Catherine then has a vision where the Virgin Mary commends her to the baby Lord; but whenever Catherine tries to catch his gaze, the bub turns away. He scornfully tells his mother that Catherine is ugly, ignorant and dirty.

As a saving grace, however, he also tells her to heed the counsel of the priest and then try again.

The next day, Catherine zealously follows the advice, takes the sacraments, and has another encounter with Jesus. This time, the baby is contented, and they’re ready to hold the wedding (in matrimonio copulari) where God takes Catherine as an eternal bride.

This is the moment that Fontana chooses, which the text describes as ecstasy. Catherine’s heart melts (liquefacta est anima) and in this sacred delirium, she can only look down. Her conversion has transformed her internally and, as Christ pronounces in the text, she has turned herself “from a crow into a white dove”.

Catherine remained true in marriage, and was martyred by the Romans for her faithfulness. She was to have been minced up with a bladed wheel – the legendary “Catherine’s wheel”, seen bottom right in Fontana’s picture – but the contraption failed, and she was finally beheaded.

Fontana’s picture represents a spiritual transcendence that became the archetype of marrying Christ. Only women had this devotional privilege, and using the boldest expressive resources at her disposal at the age of 23, Fontana shows heaven as a woman’s affair.