Tourist, 19, sparks internet hunt for a loved-up couple after capturing their engagement while posing for snaps by the Trevi Fountain in Rome

A tourist has sparked an internet hunt for a loved-up couple after accidentally capturing their engagement while posing for holiday snaps in Rome.

Alycia Savard-Ouellet, 19, from Quebec was enjoying a two-week Italian road trip this summer when she stopped off in Rome for five nights – and visited the world-famous Trevi Fountain.

But, when the science student returned home to Canada and showed her family the photos, her mother Cynthia Savard spotted the magic moment unfolding in the background. 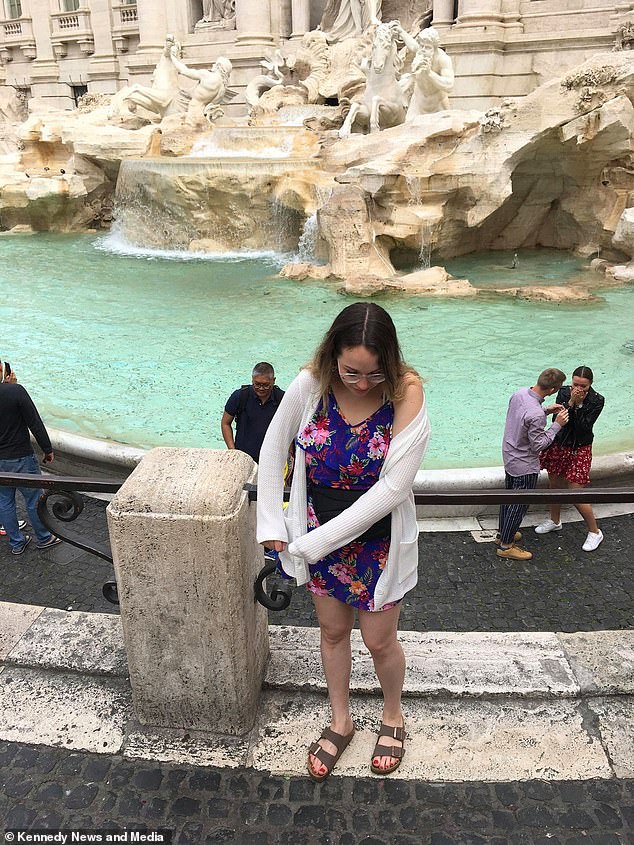 Student Alycia Savard-Ouellet accidentally captured a couple’s engagement, shown above with the man producing the ring, as she posed for snaps in front of the Trevi Fountain, Rome 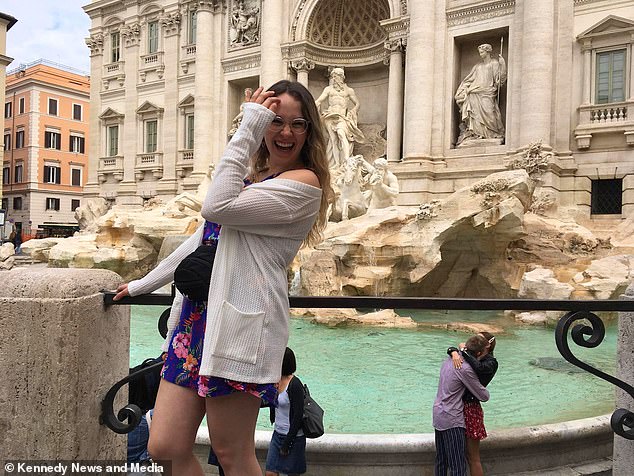 The snaps show a man wearing a purple shirt, striped trousers and brown shoes holding out a ring to his partner, who is wearing white trainers, a red dress and black jacket, who has her hands clapped to her mouth in surprise.

The couple are then shown embracing as Alycia continues to smile for the camera, oblivious to the scene behind her.

In each subsequent picture, as Alycia beamed obliviously in front of the landmark, the woman leaps into her new fiancé’s arms – after appearing to say yes.

Alycia, from Charlevoix, Quebec, said: ‘It was really cute.

‘Once I came back home, I was showing my pictures to my parents on the TV and I told them ‘oh I remember, I was laughing because of the cute couple kissing’.

‘Then my mom went “wait, go back to the picture before this one”, and we noticed he looked like he was proposing.

‘So I’ve decided to try and find them and share the pictures with them, because they are really cute and in the moment. 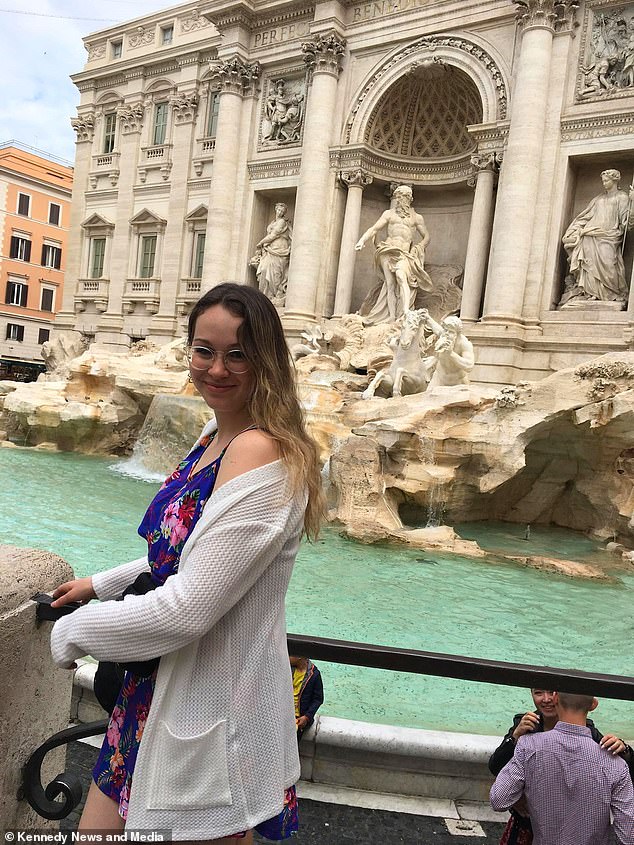 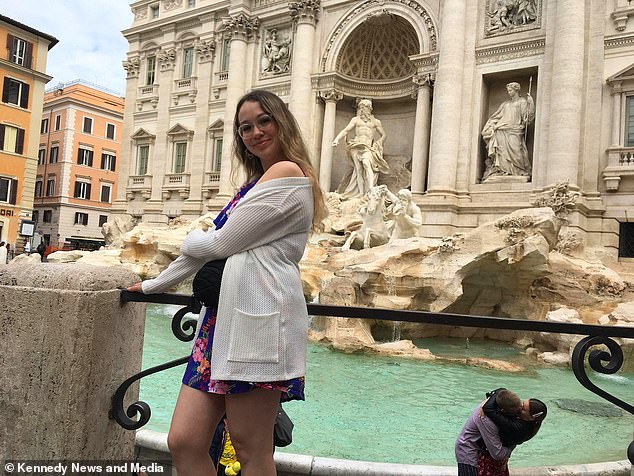 ‘It was amazing, I hope I can find them.’

Alycia had packed her summer full with travel plans, taking a 4,000 mile plane journey to Italy for a solo pizza-fuelled adventure.

During ‘the best time of her life’, Alycia also made friends with a fellow Québécoise, who captured the emotional pictures.

Alycia said: ‘It was the best time of my life. I’d always wanted to go to Italy – it was one of my dreams. When I arrived, I was in love.

‘The Trevi Fountain was on my list since it’s one of the things you can’t miss when in Rome.

‘I went there three times and the pictures were taken the first time I went.

‘It was around 9am and a girl asked me to take pictures of her, we talked for a bit and found out she’s from Montréal too. 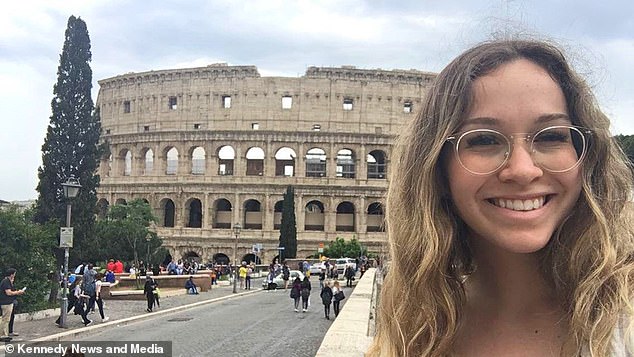 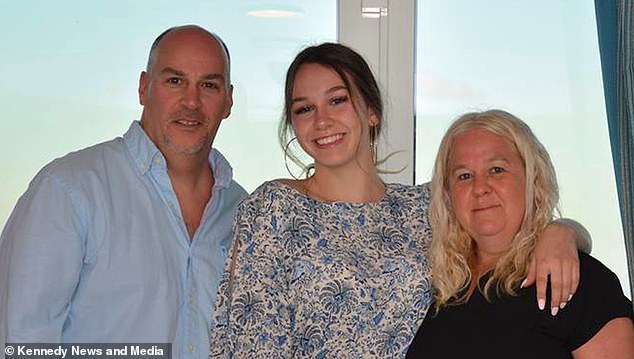 Her mother Cynthia, pictured here with Alycia and Alycia’s father Dennis, spotted the romantic moment as the family looked through pictures from the road trip

‘She offered to take pictures of me and she went ‘wait, there’s a couple kissing in the background of your pictures, we should move to take some without them’ so I looked back and laughed.

‘I love art, history and nature so Italy was the perfect match for it.

‘I went to Rome, Florence, Naples, Pompeii, Sorrento, Positano, Bari, Lecce and Tivoli then back to Rome.

‘It’s so lovely, I hope I can find them because they might want these really cute pictures.’

Featured in La Dolce Vita and a UNESCO World Heritage Site: The Trevi Fountain in Rome

The Trevi Fountain, or Fontana di Trevi, is considered to be Rome’s most famous water feature.

Named a UNESCO World Heritage Site and baroque masterpiece, legends claim that those who toss a coin into its waves will return to the Italian capital.

The 85-foot high structure depicts a statue of the mythical Greek river Oceanus, that was said to flow around the world, on a chariot pulled by seahorses. 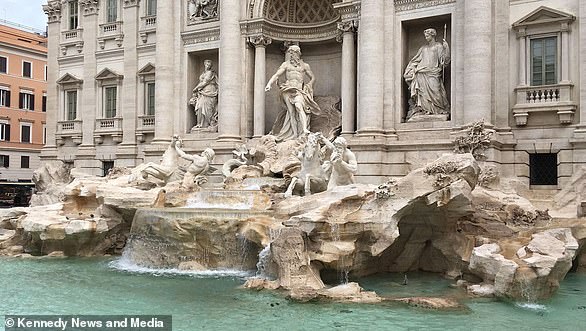 The Trevi Fountain in Rome, Italy, pictured this year. The Greek river Oceanus can be seen on a chariot pulled by seahorses

The statue is accompanied by Tritons, a merman or demigod of the sea in Greek mythology.

Completed in 1762 by Giuseppe Pannini, it was built on Trevi Square under orders of Pope Clement XII.

The romantic landmark has featured in numerous films including Federico Fellini’s La Dolce Vita, 1960, which follows a journalist searching for love and happiness in Rome.

In the film two main characters climb into the fountain’s waters for a romantic scene.

It has also featured in The Lizzie McGuire Movie, 2003, an American teenager comedy, and Three Coins in the Fountain, 1954, an American romantic comedy.