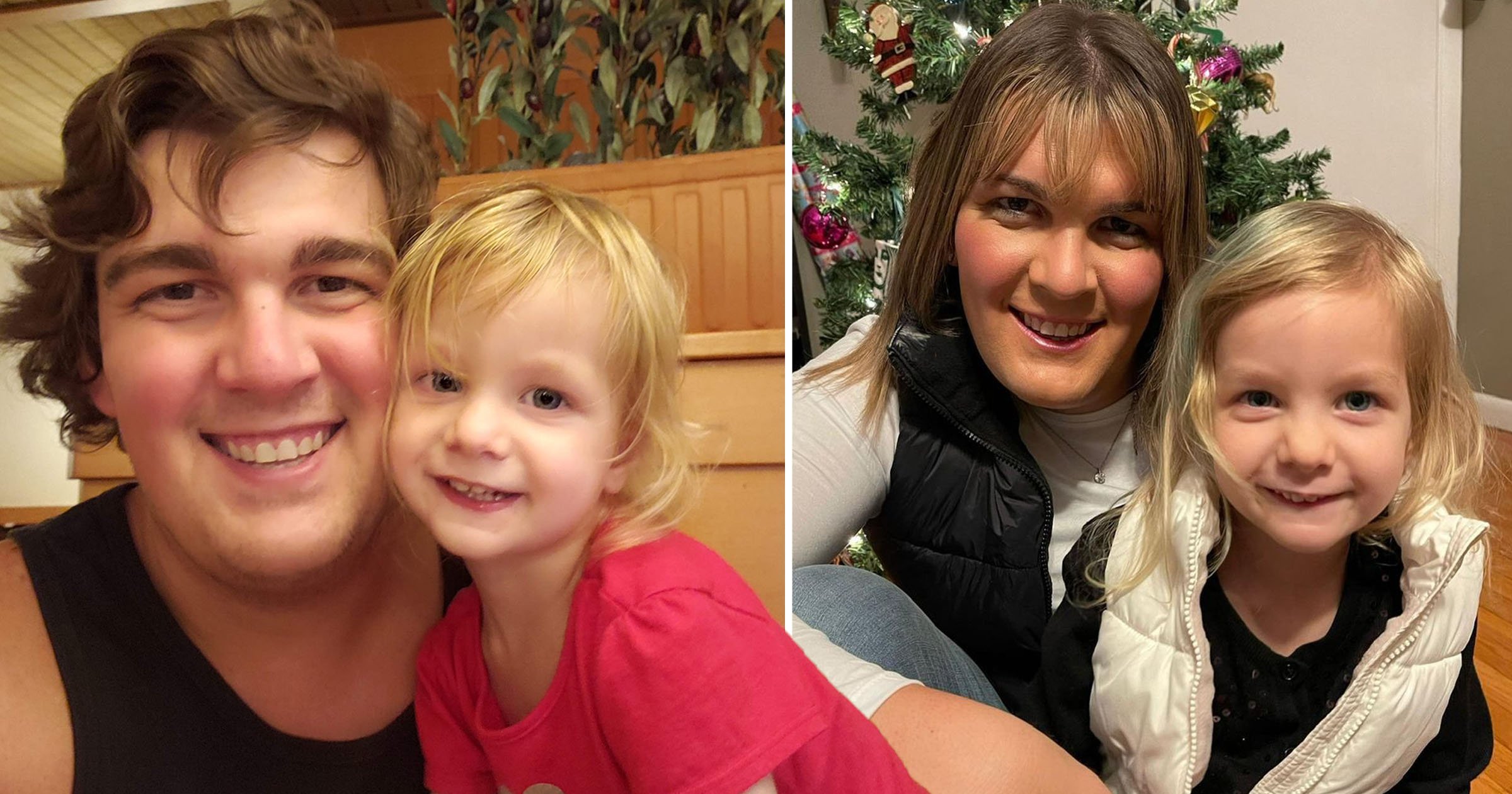 Sales consultant Rachel Doese from Iowa, USA, had feelings that she was transgender since she was six years old.

But Rachel, 30, knew that the idea of not identifying with the gender assigned to her at birth – male – was considered taboo, so she repressed these feelings until she was 28.

After growing up with gender dysphoria, Rachel experienced feelings of discomfort and distress, making it difficult to live day to day life.

In August 2011, Rachel met Lindsey Doese-Jaggers and the two got married, which Rachel was so excited about, as she felt it would fill a void that had always existed.

After three years, Lindsey gave birth to their daughter, Raelee Doese and they were both ecstatic.

However, the two separated in February 2019, due to mutual differences.

In a bid to start being her authentic self, Rachel began taking a hormone prescription and when she started to notice the changes, she came out to her family, friends and co-workers.

She then started wearing make-up and dressing more feminine, which was when her daughter became curious and asked why her dad was now wearing make-up.

Toddler Raelee, now three, didn’t seem phased by the changes and has accepted Rachel for who she is.

‘I knew I was transgender back when I was six,’ said Rachel.

‘From a young age, the main sign was just a complete feeling of dread whenever I saw my body. No matter if I was skinny, fat, muscular, or anything in between, no matter how many people saw me as attractive – something literally always felt wrong.

‘When I met Lyndsey, I was excited to get married, as I felt it was the next step in my life and would fill the void I always felt.

‘Lindsey fell pregnant in September 2016 and gave birth to our little girl, Raelee. I was totally ecstatic, as I always wanted a child of my own.

‘Although, there was a fair amount of jealousy felt, as I was envious at how close Lindsey was able to be to Raelee during the pregnancy.’

Lindsey and Rachel split in February 2019 and shortly after, Rachel joined a transgender support group, where she was given the number of a doctor who specialised in transgender care.

Rachel added: ‘I told Lindsey two months after we split and although she was resistant at first, she has come around to being an amazing friend and great ally.

‘I started transitioning when my daughter was only one and I began wearing makeup and slowly dressing more feminine.

‘One day, my daughter asked me why I’m wearing makeup and I simply told her “because I like it” and that was the end of her questions.

‘My daughter is the absolute best, as she is the most accepting kid I’ve ever met and she is always there to give me a big hug and let me know she’s here for me – I’m in awe at how truly open minded a three-year-old can be.

‘Every day she tells me “I love you” and, “you look beautiful” – I don’t think I’d have the strength to be my authentic self without her.

‘She still refers to me as ‘dad’ and that’s fine – I respect her and let her choose what to call me.’

Rachel, whose friends have also been really accepting, says transitioning has made her whole.

She said: ‘Prior to my transition, I was depressed, anxious and never happy – I was incomplete. Now, I’m happier than ever, a better parent, and a more successful business person – just finally whole.

‘Times are changing and I’m in a very conservative area of the United States where transgender people are rare – yet, I’ve been out for two years and have never had an ounce of hate in my direction.

‘It’s never too late to come out and your happiness and mental health is so important – if I can do it, anyone can.’

Do you have a story you want to share?