Truss is toast, but James Corden has been flambéed by his own shame

JAN MOIR: Liz Truss is toast, but boorish James Corden has been flambéed by his own shame

Say what you like about Liz Truss, but at least she is not shouting at waiters in a Manhattan restaurant, complaining about traces of white in an egg-yolk omelette and asking for free drinks for all her pals because she found a hair in her salad.

Hapless Liz may have proved this week that she can’t walk across a room without laddering her tights or run a country, except into the ground, but at least she is not James Corden.

James! Is that a fly in your soup? Or just a house special custard pie that has been thrown in your face with the most enormous splat?

This week the comedian, actor and chat-show host has been accused of the second worst crime on the celebrity rap sheet — which is being rude to restaurant staff.

That is unforgivable, of course, but a mere appetiser in the showbiz banquet of bad etiquette. 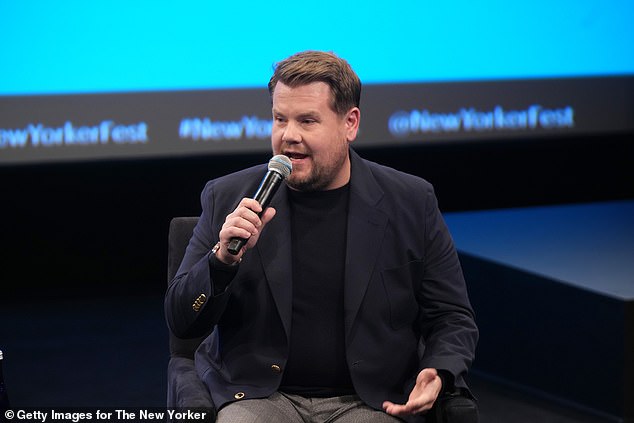 Ryanair has banned James Corden, pictured, from their flights, and at least two restaurants in Glasgow have warned him never to set foot in their establishments again

For as we all know, the worst celebrity crime of all time is jumping the coffin queue during the official period of the monarch’s lying-in-state. This is a rare offence, but if you know anyone who has committed this sin, please report them to the nearest Beefeater without delay.

Meanwhile, on his Instagram account, restaurateur Keith McNally dished the dirt on Corden’s repeatedly boorish behaviour at his Balthazar outpost in New York.

There were various transgressions, including yelling at a waiter that ‘you can’t do your job’ and also ‘maybe I should go into the kitchen and cook the omelette myself’. How despicable.

McNally named, blamed and shamed Mr Corden, before banning him from his restaurant for life — and rightly so. Three cheers for sticking up for the little guy. For surely there are few worse sights than the pampered multi-millionaire, cushioned from the grind of life by wealth and celebrity, not just taking out his frustrations on an obliging, hard-working server on the minimum wage, but humiliating them in public, too.

The way a person treats a waiter, a shop assistant, a driver or just a fellow passenger on the ride of life is a good indication of their basic humanity and quality of character. And in these most elemental of tests, James Corden has been found wanting.

Was it only a matter of time before he was exposed as a bad egg with a streak of cowardly white himself? 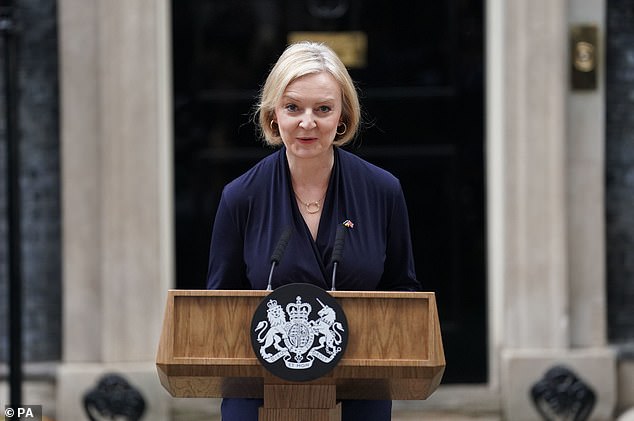 Say what you like about Liz Truss, but at least she is not shouting at waiters in a Manhattan restaurant

Some might say there has always been a spark of cruelty in his darting eyes and — like a cork popping on a bottle of rancid fizz — the bad stuff about him has started pouring out.

Remember when he made those terrible jokes about having ‘brutal’ sex with Keira Knightley while presenting a film awards show? And that odd, aggressive argument with actor Patrick Stewart, after the actor called him out for being unprofessional?

People will be asking whether Corden — like his fellow chat show host Ellen DeGeneres — is the kind of star who is genial and amusing when the cameras are rolling, but demanding and difficult when they stop.

The worst of it all has been a sickly, ringside seat at the ongoing circus of celebrity power culture. For in the end, all it took was one phone call from Corden to McNally to apologise, and the Late Show star was reinstated, unbanned from the restaurant and no doubt decorated with full Balthazar celebrity privileges and free champagne.

And while Corden may have apologised to the boss, who duly rolled over, did he also say sorry personally to the staff he’d abused, I wonder. 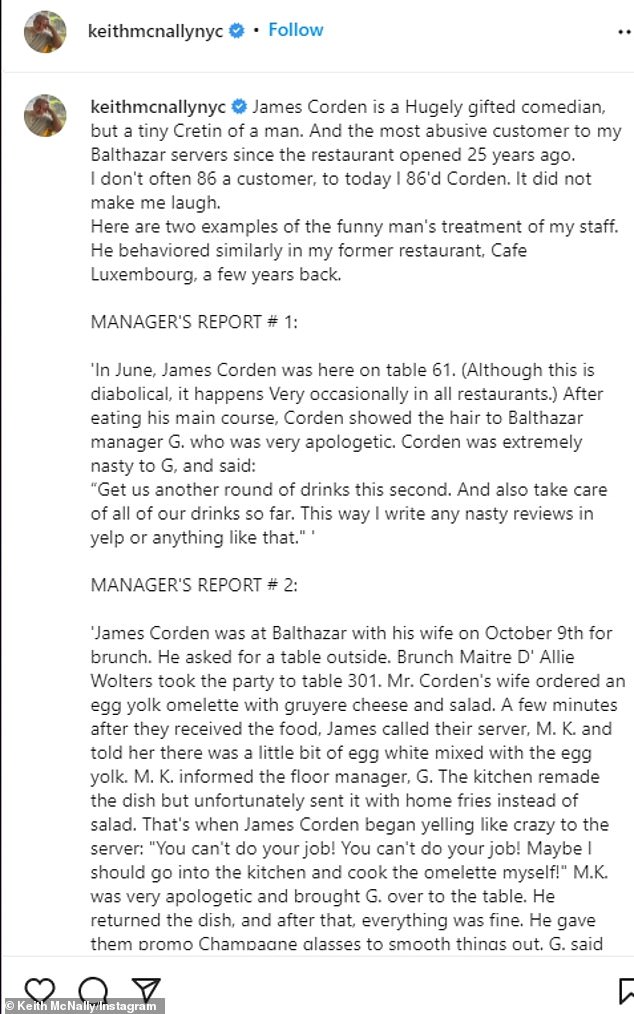 Still, it is rather cheering that others have stepped into the breach so readily vacated by the star-dazzled McNally.

Ryanair has banned Corden from their flights. At least two restaurants in Glasgow have warned him never to set foot in their establishments again, not that he ever did before.

I have banned him from ever coming around to tea at my house, no matter how much he profusely apologises for his terrible, nightmarish turn as Bustopher Jones in the 2019 remake of Cats. And good people everywhere are outraged and unhappy with his behaviour, because how you behave towards those who are less fortunate than you still matters and still counts for a lot.

So where does all this leave James Corden on the great menu of disgrace? He’s not quite toast, like Liz Truss. But he is flambéed by shame, just the same.

If I were in this ghastly cabinet, I’d sack myself

If the Tory party keep sacking themselves and each other at this pace, I fully expect to be made Home Secretary by Monday.

And if I am, the first person I shall sack will be myself. Why? Buried deep in my enormous ocean of self-regard is a tiny treasure chest labelled Common Sense. Unlike the motley cavalcade of comedy Cabinet ministers to have been in high office recently, I know that I don’t have the skillset to be in charge of, for example, national security, policing and immigration policies.

Unlike Suella Braverman, I accept my limitations. Unlike Grant Shapps, I’m not going to say yes to any ministerial job, I’m going to put the country first and my ambitions last. I mean, for how much longer can these fools continue in office, treating voters and their own MPs with contempt as they struggle to keep their grip on the greasy pole? Honestly. They make David Cameron and his administration look like political titans. I am sick to the stomach with the lot of them. They simply don’t deserve to be in power any more.

Are you thinking what she’s thinking? 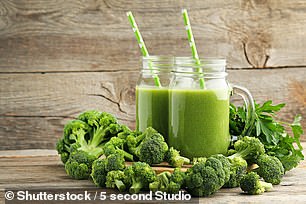 Former Charlie’s Angel Jaclyn Smith says a simple green smoothie is the secret of her remarkably youthful beauty. Of course it is, darling! Every day she pulps up a healthy blend of cucumber, apples, kale, celery, spinach, ginger, lemon juice and glugs it down. ‘It is delicious,’ she cries.

But what is the magic ingredient? Uranium? Six acres of wheat grass? Gold bullion instead of chicken bouillon? I only ask because, at 76, Jaclyn looks younger than her 40-year-old son. It’s a miracle! And yes please, I’ll have what she’s having.

Sorry Meghan, but you can’t airbrush your celluloid past

Pass me that onion and iron a fresh handkerchief. I find myself much vexed by the Duchess of Sussex’s revelation that she felt reduced to a ‘bimbo’ when working as a briefcase girl on the game show Deal Or No Deal. A bimbo! Even though Meghan must have known what the Deal Or No Deal deal was when she auditioned for the popular show and then appeared in it for nearly two series back in 2006. Millions watched the briefcase girls adding a bit of cheeky glamour to the game show. Where is the harm?

Yet in what a sceptic might see as another spot of legacy airbrushing to make her professional hinterland feminist-appropriate, Meghan claims she was hurt and upset by what was asked of her.

‘It was solely about beauty and not necessarily about brains,’ she says on her latest Archetypes podcast. ‘I would end up leaving with this pit in my stomach, knowing I was so much more than what was being objectified on the stage. I didn’t like feeling forced to be all looks and little substance. And that’s how it felt for me at the time, being reduced to this specific archetype.’ 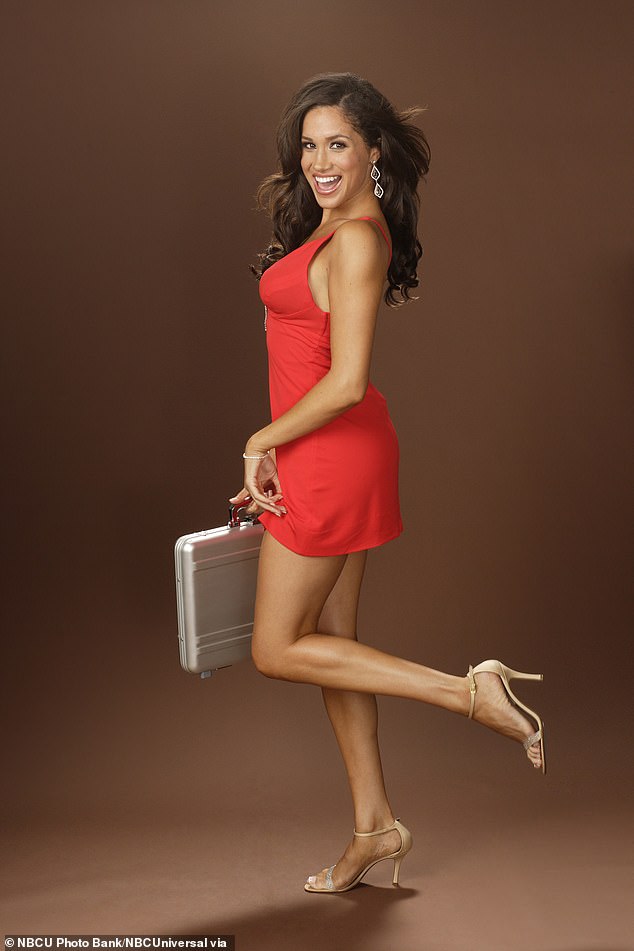 Meghan Markle is pictured on Deal or No Deal promotional material. Duchess of Sussex said she cut short her modeling gig on the game show because of how it made her feel

So she left, staked her fem flag on the high moral ground and what happened next? You might imagine she snapped up roles on Tenko or an all-female adaptation of Joan of Arc — but what she did instead might surprise you. She carried on letting herself be objectified as she negotiated the world of Hollywood films.

In a 2008 film called The Apostles, she played Kelly, a sassy but vulnerable former stripper who teaches neighbourhood housewives how to strip to arouse their jaded husbands. Two years later, Meghan snared a small role in Get Him To The Greek, a comedy starring Russell Brand. She played Tatiana, a girl at a party in a strapless metallic dress whose entire performance involved snogging Russell Brand for 20 seconds. Empowering!

Next up she was a barmaid with one line in a film called Remember Me, which starred Twilight hunk Robert Pattinson. Then, in 2011, plucky Meghan was in Horrible Bosses, with Jennifer Aniston and Jason Sudeikis but — oh no! She is being objectified again. She had a walk-on part as a delivery operative who is chatted up by Sudeikis.

‘You are way too cute to be a Fed Ex girl. You gotta be a model or an actress or something, right?’ he pants.

There is nothing wrong with any of this. Indeed, there is honour and grace for anyone taking crummy parts in films, gaining experience to improve their career. But there is no honour in trying to sanitise your past into something it is not, especially not at the expense of women who were your contemporaries and friends along the way. 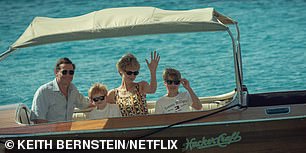 Dominic West as Charles, Prince of Wales (left) and Elizabeth Debicki as Princess Diana (centre) in series 5 of The Crown

Obliging Sussex puppet Omid Scobie has wrung his hands over the fuss about the accuracy of The Crown series on Netflix. ‘I just find all the pearl-clutching about The Crown a massive eye-roll,’ he stated recently, while doodling I LUV MEGHAN on a notepad.

Perish the thought that one day The Crown will depict Meghan and Harry in anything less than a hallowed light, with cherubim singing hallelujahs every time Meghan appears, while serfs weep with joy when Harry shows off his juggling skills. I suspect if The Crown fails to show the Sussexes in a rosy light, Omid will be gnashing his pearls between his perfect teeth.

Even Judi Dench claims The Crown is ‘crude and cruel’ and that episodes should carry a fictional disclaimer. The Dame has spoken. Let that be an end to it.

Pity those too sexy to be taken seriously

Inspired by Objectified Briefcase Girl Meghan, I’m forming a charity called Pity The Pretty, to give hope to all those who feel trapped and diminished by being beautiful.

First on my list, Charlize Theron (left), who complained that ‘when meaty roles come through… pretty people get turned away first’. And step forward Jessica Biel, who claimed she lost work after a magazine gave her its ‘sexiest woman alive’ award. Don’t you hate when that happens?

Perhaps they should look at the example set by Paul Newman, arguably the most handsome man who ever lived.

In a new biography comprised of interviews and talks he gave over the years, he says: ‘It was my appearance that got me in the door. Where the hell would I have been if I looked like Golda Meir?

‘It was like being a guy with a trust fund who doesn’t have to work. I always had that trust fund of appearance. I could get by on that.’ He is honest about it, instead of being objectified by it. So cheering. 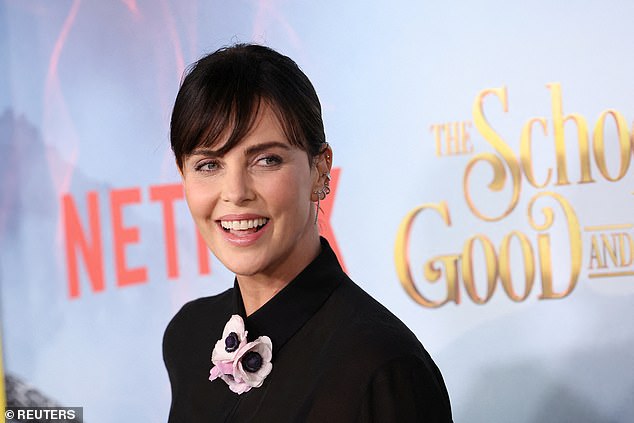