Former union leader Bill Kelty has warned that voters could punish Labor after the party axed seven MPs ahead of next year’s state poll in a factional hit that would have embarrassed “even the political elite in the old Soviet Russia”.

Mr Kelty said the process that on Monday ended the careers of seven sitting members, including several who were aligned with dumped powerbroker Adem Somyurek, would not be helpful for either Premier Daniel Andrews or federal leader Anthony Albanese who are both heading to the polls next year. 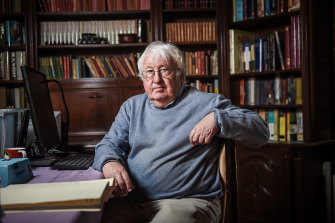 Bill Kelty has blamed Premier Daniel Andrews for dividing the spoils of the factional infighting and federal leader Anthony Albanese for consenting to the process. Credit:Justin McManus

Mr Kelty, the former secretary of the Australian Council of Trade Unions, said the party was now being controlled by a cabal of a select few.

“The impact of factionalism in the ALP is now severe, but not destructive. After all, the ALP powerhouse is in Victoria,” Mr Kelty wrote in an opinion piece for The Age following the national executive’s decision.

Mr Somyurek is under investigation by the Independent Broad-based Anti-corruption Commission for misusing taxpayer funds for factional activities.

Lower house members Robin Scott and Marlene Kairouz –two of Mr Somyurek’s closest allies – were deselected as the Labor Party’s candidates for their respective seats along with Luke Donnellan and Frank McGuire when the party’s federal national executive met on Monday afternoon.

Upper house MPs Cesar Melhem and Nazih Elasmar have been bumped to what are widely considered unwinnable positions on the ballot, and Kaushaliya Vaghela has been dumped.

The MPs had limited ability to be endorsed because the federal party’s national executive has taken control of Victorian preselections, after The Age and 60 Minutes exposed Mr Somyurek’s industrial-scale branch stacking operation.

Following the national executive meeting, Mr Melhem told The Age that while the result was not unexpected, he was disappointed.

“It is a dark moment in the history of the Labor Party, which is creating a new precedent for how preselections are done, and I feel particularly for my colleagues who have been unfairly executed,” he said.

Most of the national executive members are aligned to anti-Somyurek forces who signed a stability pact – which carves up seats and shares power between the factions – earlier this year, and include the Socialist Left and, from the Right, the Shop, Distributive and Allied Employees Association, the Transport Workers Union and a group around deputy Labor leader Richard Marles.

The former union leader accused “a group of unnamed and invisible persons” of dividing the factional spoils to determine Labor’s candidates for next year’s state election. He said they had “tramped” upon the guilty and the innocent, and “thwarted hope and the right of aspiration and experience or even the right to compete”.

“They can rectify their mistake by asking the members in each electorate to vote upon their choice. They can be accessible to the party and its membership,” Mr Kelty said.

“The pendulum has swung too far towards control by the cabal. The ALP may well win the next federal election, but if it does not, it will rue the day that it allowed the ALP to be the most undemocratic party in the state of Victoria, where even the Greens and the Liberal/Nationals parties have not abandoned membership involvement.”

Mr Kelty said the ALP had embarked upon a “journey of authoritarianism and factionalism that it may well long regret” and that voters would be repulsed by “faceless men and women” picking political candidates, adding: “Even the political elite in the old Soviet Russia would have been embarrassed.”