What it feels like… to become a widow in your thirties

On 10 April 2021, my life changed forever. My husband took his own life and I was devastated.

That morning, Kieran, 38, became a statistic: one of the 18 people a day in the UK, and one of nearly 2000 people a day globally, who die by suicide. His death left me as a widow and single parent to a six-year-old girl, something I never expected to experience in my thirties.

Kieran had a successful career as a solicitor, as well as active hobbies such as woodworking, and was a devoted dad and husband. No one could have predicted he would die by suicide, but major depression is an illness that doesn’t discriminate: it can affect anyone at any age.

Kieran had suffered with depression several years ago, but had been well until winter 2020, when he started experiencing insomnia, anxiety and low mood. He spoke to our GP about this and started taking antidepressants early in 2021. Despite knowing he was unwell, his slide into major depression with suicidal ideation was both rapid and frightening.

In the first weeks after Kieran’s death, normal life felt suspended. I was in shock; people tiptoed around me; our house was filled with dozens of sympathy bouquets of flowers.

For several weeks I stayed off work, although I sent my daughter back to school a week after Kieran died because I thought the routine would do her good – and honestly because I was so exhausted by grief that I needed some time to myself during the day.

Many people in my situation take much longer off work, but I decided to go back after two months. I’m a university lecturer, and I love my job.

I did have to brace myself when I went back, worrying about how people would respond to my news.

I didn’t want to be treated differently – or worse, have anyone say something tactless about Kieran. Fortunately, my colleagues have all been incredibly supportive. They didn’t just send sympathy messages: they found ways of helping me, like taking on some of my teaching and administrative responsibilities so I could return to work at my own pace. I am very grateful for that. 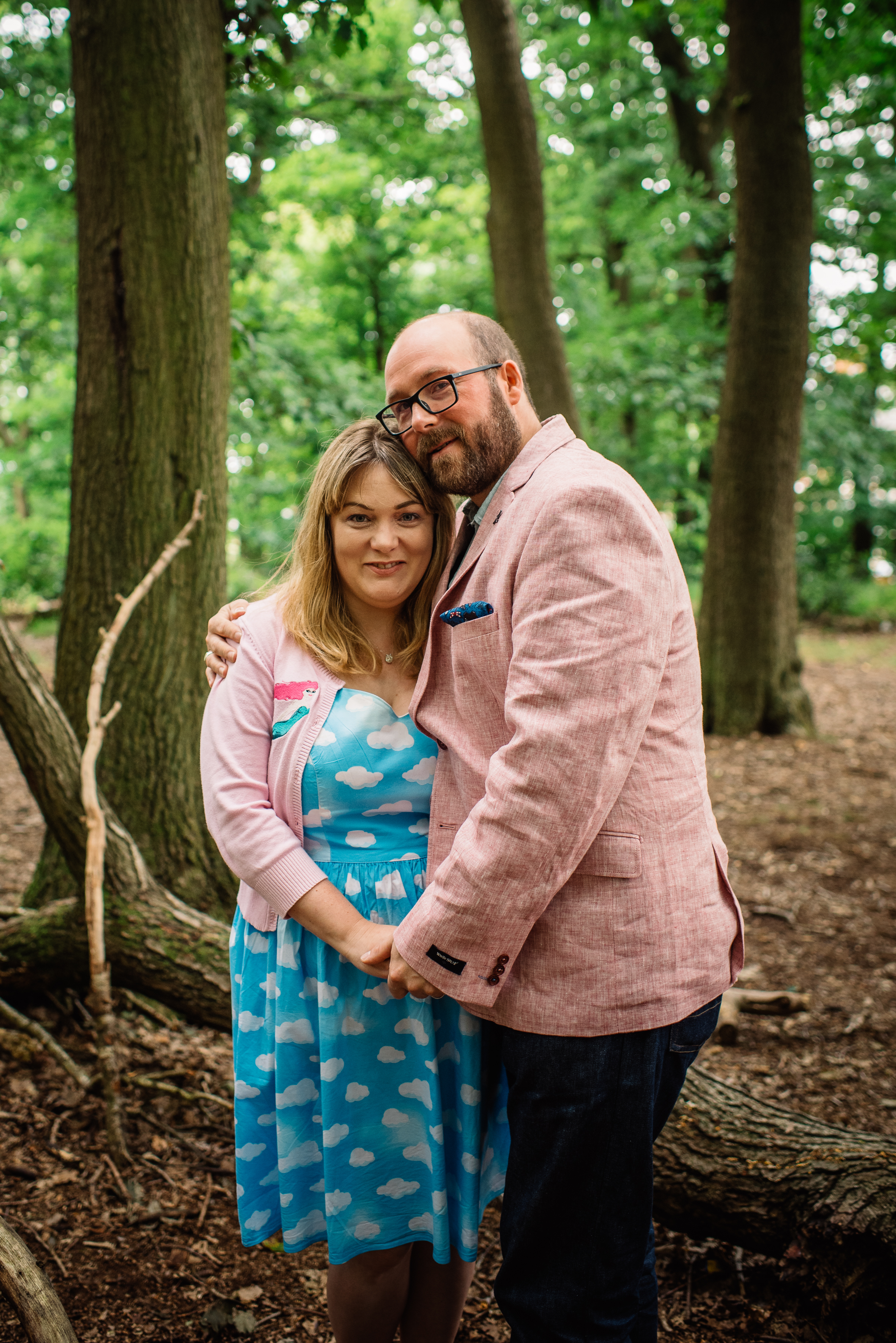 Being back at work reminds me that I’m not just a widow – I’m a skilled professional, and doing my job well is a comfort.

In superficial ways, my life is quite normal. Our daughter goes to school and to activity clubs and I make dinners, and pay the bills. We spend time with family, and I even manage to see friends and have fun. But the grief hasn’t magically gone, instead it lurks in the background of my life.

When I’ve been asked how it feels to grieve for the love of my life, I’ve compared it to having a huge app on your phone that munches through your battery life. Grief is an app that can’t be shut down. Sometimes it can be minimised – six months on, I don’t think about Kieran or his death every second of every day – but it’s still there in the background, steadily running and draining my battery level.

But no matter how I feel on the inside, I still need to work, parent my child and keep our household running. I’m really lucky to have family and friends close by, and they have all pitched in to help me, but ultimately the buck stops with me: now I have to make all the big decisions by myself about parenting, finances and future plans.

There are around 80,000 widowed men and women aged under 50 in the UK today who go through similar motions.

Working through grief takes a huge amount of mental and physical energy. Grief can cause physical symptoms such as stomach pain and even flu-like symptoms, which in the current pandemic situation means I regularly take lateral flow tests, asking myself: ‘Do I have a cold, is it Covid, or am I just grieving?’ This uncertainty is another unexpected aspect of grief that can be quite debilitating.

It’s no surprise that therapists call the psychological process of managing these feelings ‘grief work’. I already have a lot more to deal with than I used to, now I’m solely responsible for looking after our daughter and our home. Now I have to work through grief as well?!

The experts all say grief catches up with you sooner or later, and it’s healthier to deal with it sooner than bottling up how you feel. So I’ve been speaking to a counsellor regularly and working through my feelings, which can be gruelling but it has helped me get to a place where I can let go of some of my negative emotions.

Bereavement by suicide is often even more complicated than other forms of loss because it can bring with it complex feelings of guilt, blame, anger and shame. I’m not ashamed of Kieran, and I understand that his poor mental health meant his suicide was an irrational compulsion, not a choice.

I’ve always known that Kieran would never have wanted to hurt me, but while it’s easy to rationally know something it can be harder to feel that it’s true: which is why therapy has been really useful in helping me sort through complex emotions.

I’ve also found it very helpful to make connections with people in similar situations. The charity SOBS have an amazing helpline and run monthly regional support groups. I rang the hotline a few times in the early days after Kieran died and found it very helpful to just have a sympathetic voice on the other end of the line as I cried. I’ve also made fantastic friends through the charity Widowed and Young (WAY) – or as I call it, the best club you don’t want to have to join.

Connecting with other people who have lost their partners young is strangely relaxing: it’s nice to be in company where you can go from laughing to crying and back again in the space of minutes, and no one feels self-conscious because they know everyone in the room ‘gets it’.

Of course, I wish I wasn’t going through this at all, and perhaps if we understood suicide better I wouldn’t be in this situation. Mental health experts describe suicide as a process: it’s not just the one-off event of someone taking their life, but a whole set of circumstances and experiences that set someone on the road to ending it all.

Charities like the Samaritans run campaigns that encourage suicidal people to talk about their feelings and for their loved ones to listen. This is great, but it’s not enough.

We called our mental health trust’s crisis line three weeks before Kieran died; he was given an ‘emergency’ appointment five days later, which because of Covid restrictions involved only a twenty minute phone call. No one saw him face to face, which I think may have contributed to him not getting better care. It was easy for Kieran to mask his symptoms over the phone.

In this country it is very difficult to get help in a genuine mental health crisis.

Kieran had a very loving family and dozens of friends, and he did talk to us about his depression. Despite explaining to mental health professionals that he had recently had serious thoughts about ending his own life, he was not classed as being at high risk, as he said he was not suicidal at the time of the appointment.

I think even at that point of crisis, Kieran was too ashamed to tell anyone how he really felt. I think Kieran’s professional appearance, good job and supportive family meant doctors and nurses missed the signs he was seriously considering taking his own life. Suicidal people often hide their feelings, but surely mental health professionals know this?

Unfortunately, mental health services are under extreme pressure and it’s easy for people to fall through the cracks. More funding needs to be made available for research into suicide and into community support for people in crisis, so fewer people end their lives by suicide and fewer families are left experiencing the kind of grief we are going through.

I will miss Kieran forever, and I am so sad that he will never see his little girl grow up. But at his funeral I promised him that my daughter and I would live a good life for his sake, and I intend to.

Since he died we have raised over £11,000 for local charities that support mental wellbeing, and maybe that will save someone else from suicide. Despite the hole in my heart, it’s not the end of my life, and the best way to honour Kieran is to live my life to the full.

How to get help for yourself or a family member

In a life-threatening emergency, ALWAYS call 999. If someone expresses intent to take their life, this is an emergency.

If you’re worried about someone else, the Samaritans have useful advice on their website.

In this exciting new series from Metro.co.uk, What It Feels Like… not only shares one person’s moving story, but also the details and emotions entwined within it, to allow readers a true insight into their life changing experience.