Where to eat, drink and party in London this week, from Amazónico to Whipped 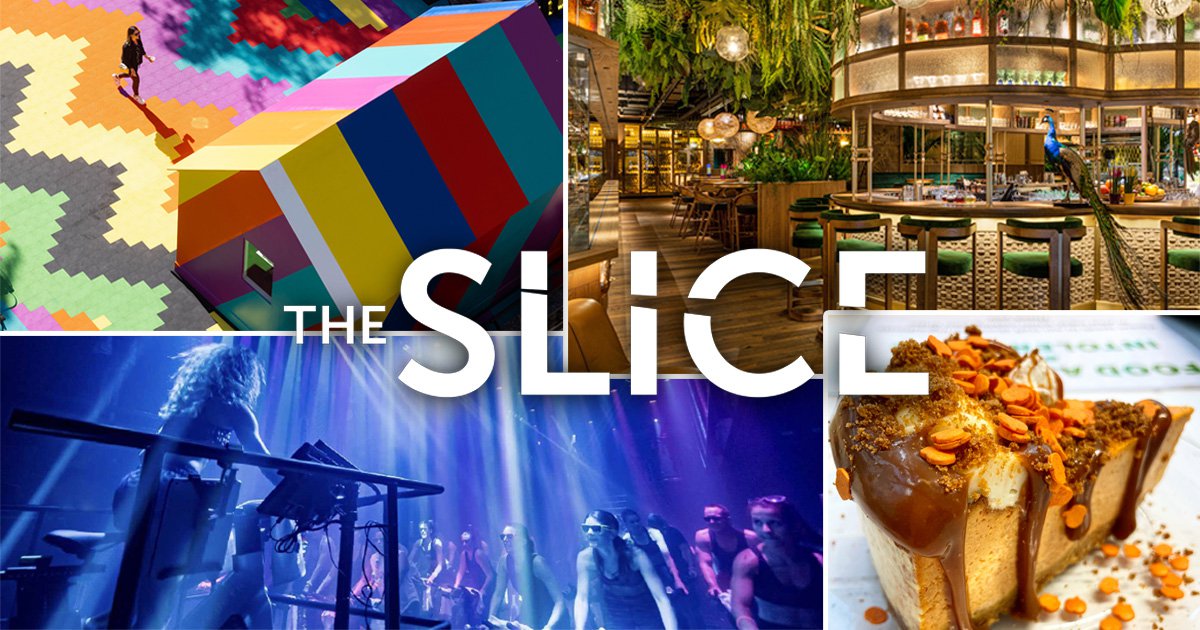 Thank god we’ve got the hair for it ‘cos we’ll be Instagramming ourselves into a frenzy this week over at a crazy-colourful yet hidden installation atop a Tube station and at an enchanting avenue of Harry Potter wands over in Leicester Square.

All that activity will leave us gasping for Martini Mondays, choice cheesecakes, and maybe some fine wines, courtesy of Idris Elba. Yes, that Idris Elba, he’s so clever.

Speaking of smarts… we’ve done a bit of brainy jiggery-pokery so you ladies and gents about town now get served up some of our finest news content, so do scroll all the way down. No skipping the fun bits, though!

It’s all part of a collaboration between plant-based foodies, Meatless Farm, and one of the hottest gyms in town, 1Rebel Southbank, who’ve teamed up to convince us to shape up and look after ourselves.

With scientific research showing that eating plant-based sausages, burgers and mince gives you better gut health (something to do with changes in the microbiome… but that’s a whole different kettle of plant-based fish), what better way to celebrate than with what they’re calling a M** F** Beast Camp?

Not content with being one of the world’s biggest actors and DJs, Mr E has now gone into the hospitality and retail businesses with Connaught Wine Cellars founder David Farber (you had us at wine) to launch Porte Noire, an outlet in the coolest of locations, namely Coal Drops Yard in King’s Cross, where you can expect exceptional international wines, artisanal cheese and a brasserie-style menu.

The shop, meanwhile, will no doubt be stocking gorgeous wines and things. He’s come a long way since Luther and ain’t that the truth.

What is the most unlikely place to find an artist’s garden? How about the roof of a London Underground station?

That’s where London-based artist Lakwena Maciver has located Back In The Air: A Meditation On Higher Ground — on a hitherto hidden half-acre of roof terrace between The Strand and the Thames.

Expect intense colour and geometric forms in a ‘floorscape’ that you can actually wander over as you marvel alternately at the art and the views. It’s all part of the Inside Out Festival presented by theCoLAB in collaboration with Westminster council,180 Studios and Vigo Gallery — plus there’s no need to book or hand over any of your hard earned.

And with colours so bright they might just have your eye out, it’s an Instagrammer’s dream afternoon out.

Live it up Latin-style

Calling all night owls and, er… peacocks?! Latin American restaurant Amazónico is back with a bang or, more specifically, an event they’re calling Noche Tardiva, meaning that every Thursday we can stay up way past our bedtime (well, we only have Friday to get through and we can wear shades on Zoom calls) dining until one in the morning, and drinking and dancing to their jungle beats until even later still — around 3 of the AM, in fact!

With classic Latin fare such as empanadas and langosta arrebatada — that’s lobster to you (we did Spanish GCSE, we know what goes on) — live bands, special guest DJs, and table bottle service so you can make like Paris Hilton, it doesn’t exactly sound like a cheap night out, but it certainly sounds like a fun one. And we’ll spend good money on fun.

You know how much of a Harry Potter fan you are. Well, you’ll be keen to hear that, as part of 20th-anniversary celebrations (that came around fast!) for the first movie (yes, Harry Potter And The Philosopher’s Stone, don’t pretend you don’t know), a walkway of giant Wizarding World wands is coming to Leicester Square.

And we’re not talking some puny little sticks in glass cases — oh, no! — this is an awesome avenue of 15-foot wands — nine of them to be exact, one for each of your fave characters (so that’s Harry, Hermione, Ron, er… Dumbledore… oh, you know!), all lit up from 6pm-8.35pm every evening, so you can get your ‘gram on with some spell-binding snaps.

It’s all to mark the return of that first film to the big screen on October 29. Yes, we know you know it back to front, but you’ll be front row. We know you.

If you’re thinking of doing Frieze Week — you know, the huge art festival that descends on London every year — and we certainly are (well, we have a little Vivienne Westwood number that needs an outing), then let us suggest you take in a couple of Nigerian-British artists whose work was featured in Paris Fashion Week, namely Tobi Alexandra Falade and Bunmi Agusto.

They’re part of the London edition of the 1-54 Contemporary African Art Fair (54 ‘cos that’s how many countries are in the continent — but, of course, you knew that!) at DADA Gallery and they tackle such themes as Nigerian heritage, immigration and identity — all the hottest hot topics — through the medium of surreal self-portraits.

Not only fascinating to see but smart to talk about — and that, friends, is how we operate.

Shake up your Mondays

Martini Mondays? What about Tuesdays, Wednesdays and Thursdays, that’s what we’d like to know? Well, at least it’s a start down at award-winning cocktail bar The Gibson, where they are collaborating with Dima’s Vodka on a campaign to beat the Monday blues with — what else?! — strong liquor.

So for a mere £10, you’ll get one of their signature vodka cocktails (tell ’em to shake it hard — we did a masterclass once so we know this stuff) served with a complimentary oyster, pickled onions and shaved Parmesan.

And if you can’t make it to Shoreditch the next couple of Mondays, or — heaven forbid! — you’re being sensible and not going out on a school night, you can always order up a bottle of Dirty Fig Martini so you can join in from afar. Mondays… and Tuesday mornings (gah!) will never be the same again.

Sticky it to me!

Do you have a sweet tooth? Do you know what a Michelin star means? Do you like cheesecake? If the answer to any of the above is in the affirmative, then you need to take yourself down to Brixton Market and check out a brand new dessert concept called Whipped from Alice and Jamie, who have that Michelin-star training between them.

Sure, you might have a total carb comedown on your way home, but sometimes it’s just the price you have to pay for stickies this good!

How to get your Metro newspaper fix

Metro newspaper is still available for you to pick up every weekday morning or you can download our app for all your favourite news, features, puzzles… and the exclusive evening edition!