George Clooney has long been one of Hollywood's most globetrotting stars, but these days he is hunkered down with his wife, Amal, and their two young children in their home in Studio City, California. When Clooney bought this house in 1995, he was saving lives every Thursday night on NBC as Dr. Doug Ross on ER. Now, with a deadly pandemic raging, all he can do is try to tend to those he cares about most. 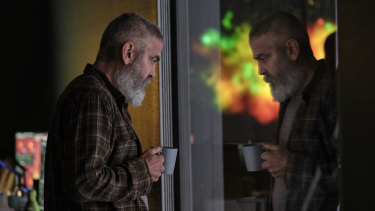 George Clooney in The Midnight SkyCredit:Netflix

He worries about his elderly parents, who live in Kentucky. He and his wife have regular dinners over FaceTime and Zoom with them as well as with friends, to keep in touch and stave off the sense of isolation. He is grateful that his 3-year-old twins, Alexander and Ella, are too young to understand what's going on.

"Everything for them is still playtime," the 59-year-old actor-director said by phone on a recent afternoon. "If there's any advantage to all this, it's that I wake them up every morning and put them to bed overnight, my wife and I. I wouldn't have been doing that probably if we were on the road or working or something. So there's that at least."

As it happens, when the pandemic hit in March, Clooney had just finished shooting his seventh and most ambitious directorial effort, post-apocalyptic sci-fi film The Midnight Sky. Set 30 years in the future, the film centres on a lonely man facing the end of the world and deals with themes of isolation and connection, hope and despair. Before 2020 came along, it all felt a little more like make-believe to Clooney. Reality is a whole different ballgame now.

In The Midnight Sky, which is now streaming on Netflix and co-stars Felicity Jones and David Oyelowo, Clooney plays Augustine Lofthouse, an ageing scientist with cancer, living alone in the Arctic in the wake of an unexplained global catastrophe that has rendered the planet uninhabitable. Joined by a silent young girl who mysteriously appears in his remote station, Lofthouse embarks on a desperate effort to communicate with the crew of a spacecraft that has been on a mission to Jupiter in order to warn them not to return to Earth. 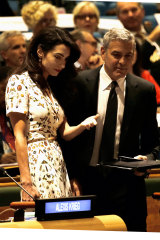 Adapted by screenwriter Mark L. Smith (The Revenant) from Lily Brooks-Dalton's 2016 debut novel, Good Morning, Midnight, the script for The Midnight Sky first came to Clooney as a potential acting gig. With a budget of $100 million and dual storylines set in space and in the frozen Arctic, the project was essentially two films in one – an Arctic survival thriller and a sci-fi adventure set in space – with a scope and scale beyond any of the previous films Clooney had directed, which include Confessions of a Dangerous Mind, Good Night, and Good Luck and The Ides of March. But, intrigued by the story's themes, he decided to take on the challenge.

Contemplating the end of the world was nothing new for Clooney. "I grew up in the '60s, doing duck-and-cover drills," says the actor, who lost 25 pounds and grew a bushy beard to play the gaunt and grizzled scientist. "We were always living under the idea that at some point we're going to have a nuclear exchange with the Soviet Union. Then as time wore on and the Berlin Wall came down, it became about other things: Is it going to be India and Pakistan that blow us all up? Then climate change became a political hot potato. There have been so many different versions of ways we could blow it if we don't pay attention."

In The Midnight Sky, Clooney saw echoes of the 1959 film On the Beach, based on Nevil Shute's post-apocalyptic novel in which a submarine commander (Gregory Peck) cruises the seas in the aftermath of a nuclear war. But while that movie – a clip of which is shown in Midnight Sky – ends with utter doom, Clooney wanted to leave audiences with at least some glimmer of optimism by highlighting humanity's resilience and capacity for love.

"To me, there's always hope as long as you can say, 'We can fix this, it doesn't have to end this way,'" he says. "For this story in particular, there is real hope at the end. It's not 'On the Beach': Kiss Gregory Peck goodbye and that's the end of it."

"Obviously we had no idea we would be in the midst of a global pandemic when the thing was coming out," says Grant Heslov, Clooney's longtime producing partner. "But at the end of the day, we both feel that the movie is semi-hopeful. It's this huge canvas: We're in space, we're in the Arctic. But it's really this story about connections and redemption."

Shooting the Arctic scenes in Iceland last fall, Clooney didn't have to look far to get a sense of the existential peril posed by climate change. Arriving to shoot on a glacier, the Midnight Sky team discovered that rain had melted all the snow, forcing them to move the production further out in search of a suitably icy landscape and adding an extra 45 minutes of travel each day to and from the set.

"There is no argument about the science in a place like that because they're living it," Clooney says. "They're on the front lines. They're the canary in the coal mine. When you get to Iceland, the first thing you take away is there isn't a single person that doesn't know exactly what global warming means to them. It would be a good lesson to all of us in terms of taking this seriously."

Even as Clooney was getting a handle on the film's complex production challenges, circumstances forced him to pivot. While shooting in Iceland, just weeks before production was to begin on the space portion of the film, he received a call from Jones – who was set to play a member of the spacecraft crew who, we learn, is Augustine's long-lost daughter. "Felicity said, 'I have some interesting news: I'm pregnant,'" Clooney says. "First you say, 'Fantastic!' And then the reality sets in."

Initially, Clooney set out to shoot around Jones' pregnancy, using a body double and digital effects to hide her growing bump. But after wrestling with it for about a week, he decided to embrace the situation and simply make her character pregnant. "My pitch to Felicity was, 'Let's deal with this like Frances McDormand in Fargo: She's pregnant and she still does all the things she has to do.' She was relieved." 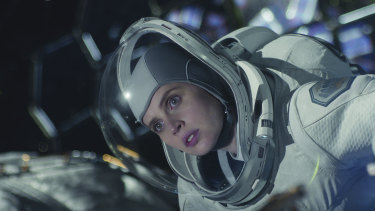 Felicity Jones in a scene from The Midnight Sky.Credit:Philippe Antonello/Netflix via AP

Making the character pregnant instantly brought a measure of hope to a story that could otherwise have felt irredeemably bleak. "It adds so much complexity between the relationships and also just the meaning of the film," says Heslov. "Here's a father reaching out to save his daughter, who he has never been there for, and he gets the chance to save her and his grandchild."

As the pandemic hit, leaving Clooney and his team to struggle through post-production remotely, his sense of the movie he was making shifted yet again. While Midnight Sky had originally centred largely on fears of the apocalypse, social distancing brought other elements increasingly to the fore.

"Once we started editing, it became clearer and clearer that the bigger theme was how damaging it is to not be able to communicate and be near the people that you love," Clooney says. "I didn't understand how deeply important the lack of communication was until I was living it. I think none of us did."

For Brooks-Dalton, seeing how life during the pandemic has dove-tailed with the themes of isolation and existential fear in her book has been a surreal but not entirely disheartening experience.

"Writing a book is such a solitary experience in and of itself," she says. "To look up from crafting these isolated characters and the world they find themselves in and realise that the rest of the world has joined me in this imagining – and that we are not in fact imagining but we are here together in the present tense – is wildly disconcerting. But there was an element of comfort in that for me. The alignment of our collective consciousness is very powerful, and if there's any silver lining here, which I think is hard to find, it's that."

Having shot the film in a 65-millimetre format intended for IMAX viewing, Clooney had hoped that a large number of viewers could take in this end-of-the-world story in their local multiplexes. But as we head into the most dangerous phase of the pandemic, Netflix's planned big-screen rollout have been pared back to a handful of independent theatres and drive-ins. "That [big-screen experience] was an exciting part of it," Clooney says. "But there are much bigger issues in the world than you don't get to show your movie in movie theatres. So you just kind of suck it up and take it."

It remains to be seen whether movie-goers who have already been beaten down by months of relentlessly grim news are in the mood for Clooney's take on the end of the world. To some, The Midnight Sky, which has earned mixed reviews from critics, may seem perfectly timed. To others, it may be exactly the wrong movie for this already dystopian and lonely moment.

As we head into a dark winter, with vaccines coming even as hospitals become overwhelmed, Clooney finds himself caught – much like the characters in The Midnight Sky – between the poles of hope and despair. "There really is light at the end of this tunnel and there's a way out," he says. "But boy, there's going to be a lot of damage done before we get there."

Taking the long view, though, he maintains hope that our species has a ways to go before the final bell marking midnight strikes.

"I'm a realist – I can look at the world and see exactly what it is. Every great love story ends in tragedy: You die," Clooney says. "But I'm always optimistic that sooner or later we're going to get these things right. It's going to take a lot of effort and we're not going to see all of it in our lifetime. But that's part of our job, to keep rolling that ball up the hill."

Find out the next TV shows, streaming series and movies to add to your must-sees. Sign up to get it every Thursday.