Tony Birch’s first book, Shadowboxing, was a collection of linked short stories set in 1960s Fitzroy, well before gentrification transformed that inner-Melbourne suburb into an enclave of boutiques and wine bars. His subsequent work as a novelist, poet and essayist has roamed farther afield, but his world view has remained solidly grounded in the cramped houses and shabby laneways of that bygone era. 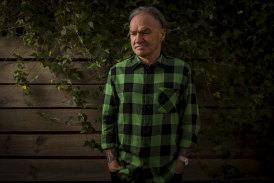 Tony Birch is considered one of the most important figures in the renaissance of Indigenous writing.Credit:Chris Hopkins

This is true not simply in the specific sense that he often returns in his writing to the impoverished working-class milieu of his childhood, but in the wider sense that his core commitments were forged in that tough environment.

His work, as has often been noted, is concerned with those in our society who have the least. He recognises the brutalising effects of immiseration (the violent father and the battered wife are recurring figures in his fiction), yet he is more often concerned to dignify the lives of his characters, dramatising moments of generosity, loyalty, kindness and resilience in the face of hardship.

Birch tends to be pegged as a social realist on these grounds, but this is true only up to a point. Yes, his stories are sturdy constructions built from concrete details; they describe a credible world in scrupulously unadorned prose. But literary genres are never pure, and this is as true of realism as any other genre. One of the notable features of Birch’s latest book of short stories, Dark as Last Night, is the way that several inclusions deliberately distend their notional realism.

The most striking example of this is the title story, which opens the collection. It is told from the point of view of nine-year-old Rose. She lives in a small house in an insalubrious suburb with her heavily pregnant mother and her father, who is a drunk and a wife-beater. Torn between the fear of her brutal father and the instinct to protect her vulnerable mother, Rose is unsure where to turn for help, until she is befriended by her peculiar next-door neighbour.

At that point, the story begins to evolve, incrementally but unmistakably, into a fairytale, complete with an ogre, a witch and a magic spell. And in doing so it raises an implicit question about the relationship between the ethical commitments of Birch’s fiction and its verisimilitude. To what extent is the act of writing stories in which bad guys get their comeuppance, as is gratifyingly the case in several stories in Dark as Last Night, an exercise in wish-fulfilment?

The self-reflexive move is not the sort of thing one readily associates with Birch, but it serves as a reminder of just how supple and surprising the short-story form can be in the hands of a dedicated practitioner. Though Dark as Last Night does not stray beyond themes and settings Birch has long claimed as his own, it discovers within them a great variety of textures and moods.

In The Manger, for example − another standout story − Birch looks askance at the cultural Catholicism that infuses his literary vision (a lapsed Catholicism, evidently: in Whisper Songs, he writes of “a God I have no faith in”), the story’s playful tone and innocent child’s-eye perspective belying its dark undercurrents. The reflections on small-town racism and Indigenous belonging in Bobby Moses strike a melancholy note, in marked contrast to lighter inclusions such as Starman, in which a teenage boy’s crush on his neighbour leads to a bit of Bowie-inspired gender-bending.

At the heart of the collection is a concern with the bonds of family, a theme that Birch carries over to his latest book of poems. Whisper Songs and several of the stories in Dark as Last Night are dedicated to his late brother, Wayne Birch, and there is a plainspoken intimacy to the memorialising in both books, but it is in the poetry that the creative work of mourning takes on its wider implications.

Whisper Songs is divided into three sections that set out Birch’s concerns. The first, Blood, consists of heartfelt poems about various members of his family across several generations. The emphasis shifts in the second section, Skin, to a consideration of historical and political contexts. Several poems in this section take the form of versified official documents, reflecting the fact that legal mechanisms have long been weaponised against Indigenous people, and indeed other people of colour.

The collection’s longest poem, The Eight Truths of Khan, which is set in the early 20th century, traces the efforts of an Indian-born migrant to establish his good character so that he might be granted residency in Australia. The obstruction he faces becomes a satirical depiction of the way that neuroses about race have shaped the nation’s bureaucratic structures.

The final section of Whisper Songs, Water, closes the circle by reaching back to the personal concerns of the first section and expanding them via a chain of metaphorical associations that links blood with water and water with the life force that flows through the land.

Even as these poems are expressing grief and lamenting the degradation of “the waterways of Country / beaten raped clogged dead”, they are affirming the timeless Indigenous connection to land and triumphantly superseding the historical oppressions of the middle section. “You were never here, little brother,” Birch writes in the moving prose poem Birrarung Billabong. “You will always be with the water.“

There is something of a renaissance in Indigenous writing going on in this country at present. Dark as Last Night and Whisper Songs demonstrate why Birch is considered one of this informal movement’s most respected figures. They are finely crafted, impassioned, clear-eyed and ultimately validating works, complementary to the point where their content overlaps.

The last story in Dark as Last Night, Riding Trains with Thelma Plum, is one of Birch’s comeuppance stories: a sharply observed vignette about a woman facing down an obnoxious jerk on a suburban train.

In Whisper Songs, he gives us another version of the incident under the same title, the poem stripping the story back to its potent essence. It effaces the bested bad guy altogether, leaving us with the empowering image of a young Indigenous woman, her fist raised in defiance.

Tony Birch is a guest at the Melbourne Writers Festival (mwf.com.au).

The Morning Edition newsletter is our guide to the day’s most important and interesting stories, analyses and insights. Sign up here.