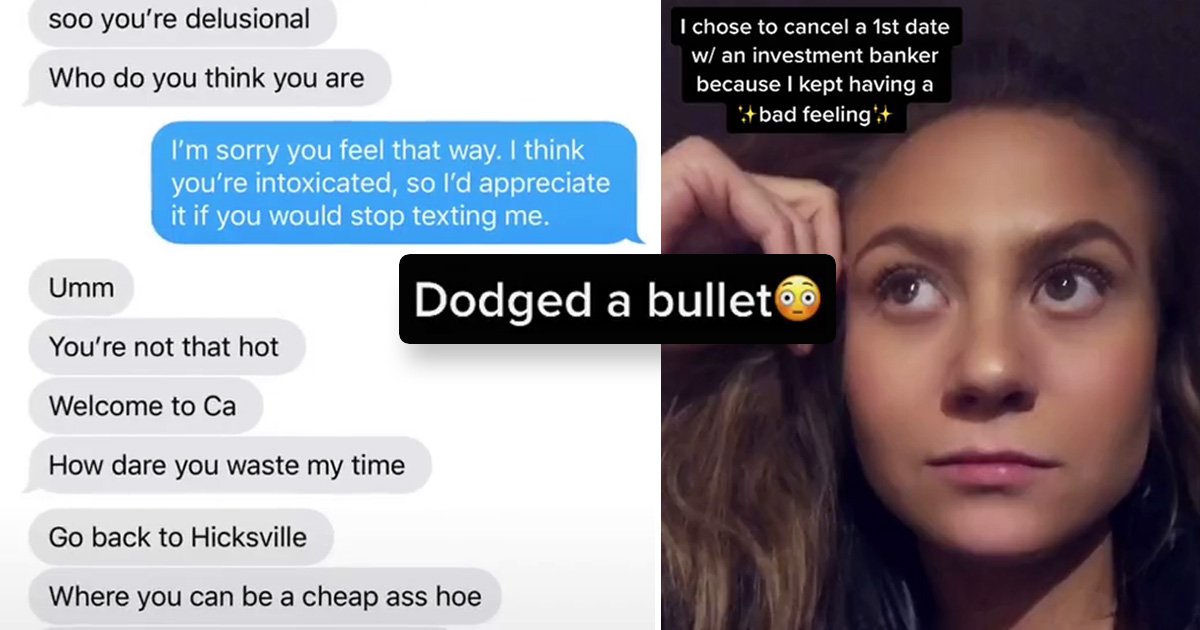 The dating world is a scary place.

You never know who the person behind the messages really is until you meet them.

We have all seen enough episodes of Catfish and heard horror stories to remain vigilant and wary of potential suitors.

And it seems this caution and learned intuition helped TikTok user @madz.about.you escape what could have been an unnerving date.

In a post on the video-sharing app, the woman explains she chose to cancel a first date with an investment banker called ‘Mark’ because she kept having a ‘bad feeling’ beforehand.

Judging by his response, she made the right decision.

In the aftermath of her cancellation, the man in question sends a series of abusive messages to her.

The video goes on to show screenshots of the conversation where ‘Mark’ calls her ‘delusional’ to which she replies: ‘I’m sorry you feel that way. I think you’re intoxicated, so I’d appreciate if you would stop texting me.’

Her response appears to rile him up even more. He says ‘you’re not that hot’ and ‘go back to Hicksville where you can be a cheap ass hoe’.

‘You’re probably really young and not good with social skills – possibly too much screen time,’ he writes. ‘Not sure how you do things out in Hicksville but you should def learn to respect people’s time sweetie.’

The woman doesn’t reply to the tirade but soon the messages become even more disturbing.

‘Mark’ texts: ‘Are you rebelling? Do you not feel desired? Cuz I desire you but you knew that when I talked to you’

‘I actually want to please you’, he continues. ‘Which is why I’m withstanding this whole situation. Cuz I want you’

In the final screenshot shared, ‘Mark’ finishes the conversation by texting: ‘This lifestyle is not becoming of a young lady like yourself’ and calling her a ‘joke.’

The video has since been viewed over 885,000 times with fellow TikTok users agreeing that she ‘dodged a bullet.’

In a second video posted to her channel, the woman explains what gave her the bad feeling in the first place.

She says she had met ‘Mark’ in person when he initially asked her on a date. At first she thought he was attractive and and felt if the date was in a public place she would be safe.

Reply to @abbimurphyyy Hope this gives a little more insight! Honestly, his impatience to meet and follow ups were my red flags🚩#redflag #blinddate

However, she goes on to say that red flags appeared when he text her to go on a date the very next day. He then checked in four times making sure she was going to meet him.

‘It just seemed odd to me’ she says. ‘I talked to my mom about it and she thought it was weird too. So that’s where the gut feeling came.’

‘It was too much too fast.’

Rush Hour Crush – love (well, lust) is all around us

Tell us about your Rush Hour Crush by submitting them here, and you could see your message published on the site.