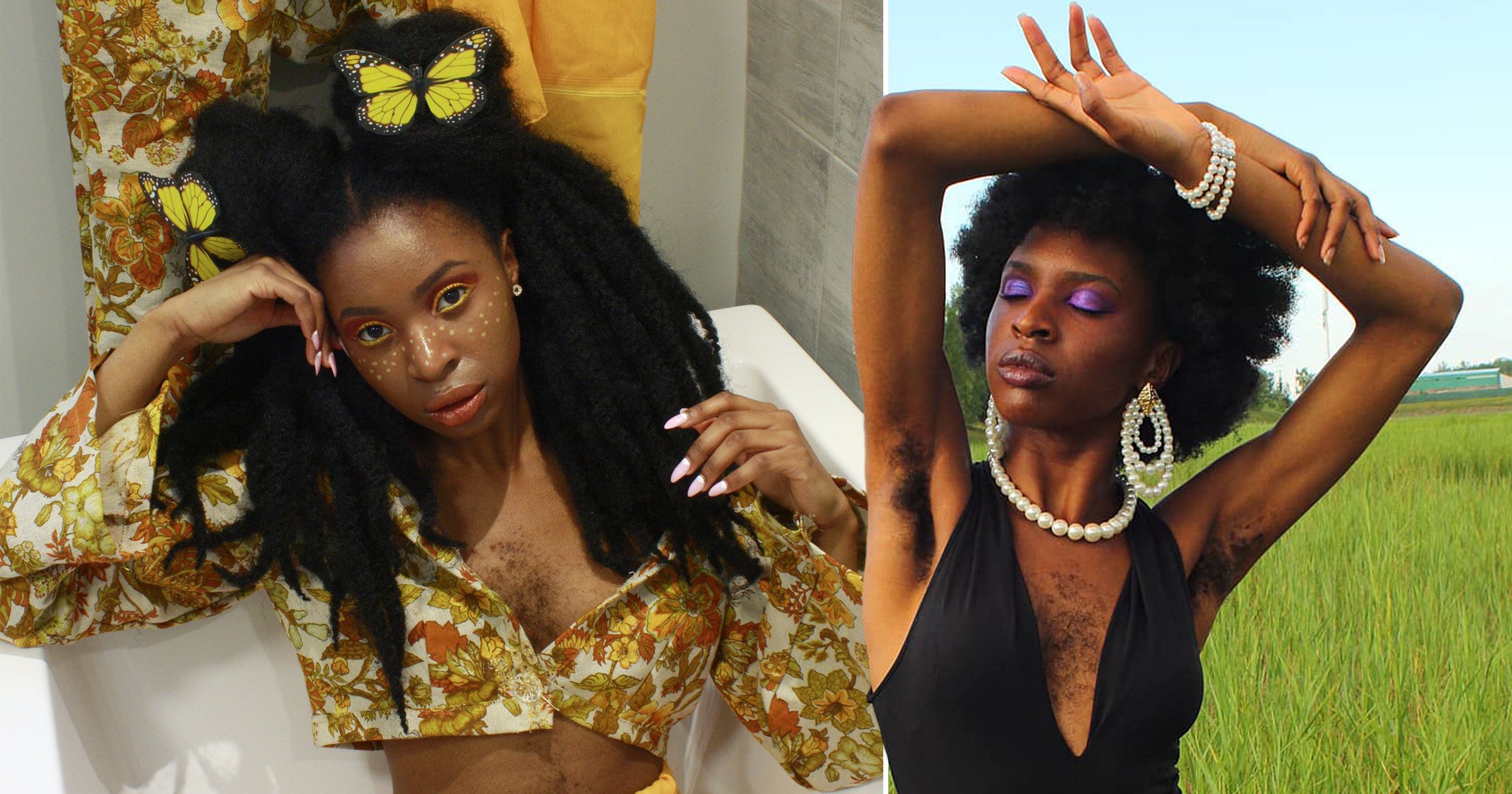 Esther Calixte-Bea is a masterclass in how accepting your body just the way it is can make you feel wonderful.

At one point in her life, the artist, from Montreal, Canada, absolutely hated the hair that appeared on her chest, to the point that it left her severely depressed.

But in 2019, fed up of carrying the ‘heavy burden’ of self-hate, Esther decided to make a change.

She chose to ditch the razor and learn to accept her chest hair in all its glory.

Something that helped Esther on her journey was reevaluating the cultural norms around female body hair.

‘There is no medical explanation behind my hair – I am just a hairy person,’ she said.

‘I have recently learnt that the women on my father’s side are quite hairy and it is perfectly normal.

‘I come from the Wè tribe in Ivory Coast, Africa, and the women in my great grandmother’s time were very hairy and it was seen as beautiful.

‘It has taken me most of my life for me to accept my body and embrace who I am.

‘I became fed up with feeling insecure and shy.

‘It was tiring carrying around a heavy burden and hiding my hair from people.

‘I decided enough was enough. I stopped shaving and decided to be me.’

Along with giving up obsessive hair removal routines, Esther began to consciously compliment herself and stop relying on society to define what’s beautiful.

Soon, her self-esteem rocketed. She hasn’t looked back.

‘It is the best thing I have ever done as I feel sexier and comfortable in my own skin,’ said Esther.

‘I obsessively shaved in school to make sure nobody would see my hairy chest.

‘I would freak out if just two hairs appeared.

‘Shaving and waxing caused me tremendous amounts of pain. It was more hassle than it was worth.

‘If women weren’t supposed to have hair, we wouldn’t grow it. It is the society that tells us to shave.

‘I have redefined beauty for myself and I no longer allow society to dictate it for me.

‘I have decided what beautiful is for me.’

It isn’t just her chest hair that Esther has embraced, but the hair under her arms and on her legs, too.

She now shares images of her body hair with pride on her Instagram, and hopes to inspire others to embrace their bodies.

She also paints women with body hair to hammer home that this can be beautiful.

Esther said: ‘It has been challenging as I am going against the “norm”.

‘I had to push myself at the start by walking out with short shorts with leg hair.

‘After a few weeks, I began to feel comfortable.

‘People stare but I don’t have to worry anymore.

‘Fear tried to paralyse me. But I don’t have to worry anymore as I have accepted who I am.

‘I have received thousands of messages from women all over the globe who thought they were alone.

‘I have shown them that facial and body hair is nothing to be ashamed of.’