A woman who shared a healthy cooking hack on social media has divided opinion as viewers argue the method ruins the food’s flavour.

Posting on TikTok under the handle @eemilydharperr, the woman who is believed to live in the US, explained how she reduces the amount of grease in ground beef.

She demonstrated how a sieve can be used to pour excess grease down the drain and proceeded to rinse the meat under the tap, before placing it back into the frying pan to finish cooking.

The life hack racked up over 4.5 million views, however not everyone was impressed with some arguing the method ruins flavours and causes grease to block drains. 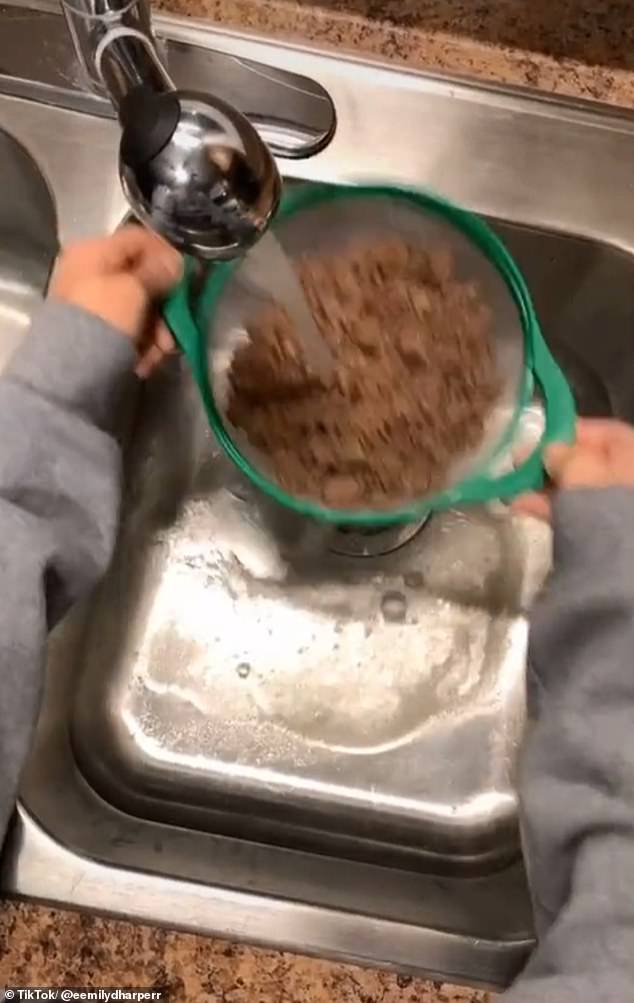 TikTok user @eemilydharperr, believed to be from the U.S, has gone on viral after sparking a debate about washing meat with water to remove grease 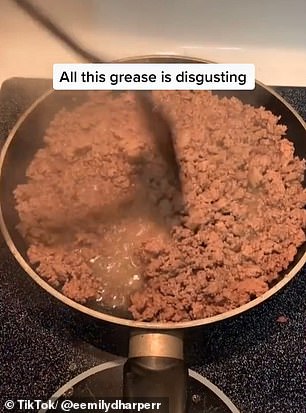 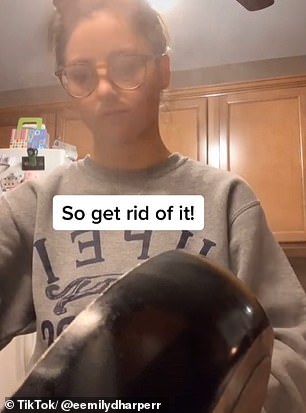 Disgusted by the grease in her cooking (pictured left), the woman poured it down the drain (pictured right) and proceeded to rinse the meat with water

Captioning the post ‘ another kitchen tip for you’, Emily begins the viral video by using a spatula to separate a bag of ground beef.

She decides to drain the excess grease in the sink, after becoming disgusted with the amount bubbling in her cooking.

Placing the meat in a strainer, she rinses it with water and places it back into the frying pan to demonstrate the difference.

Shocked by the hack, many responses struggled to see the pros and argued the method reduces flavour, blocks the sink and spreads bacteria.

One person wrote: ‘She really said ‘look at the difference!’ like she didn’t just strip every last drop of flavour out of that s***’

‘I started when she drained the fat down the sink to congeal in and clog up the pipes. Rinsing the meat under the faucet was just flavourless icing on the sawdust cake,’ another said.

A third added: ‘That must be the blandest, driest beef in all of the world. Like weird sawdust crumbles’

However other said they’ve been using the method for years and claimed the meat still tastes good.

‘In terms of healthy cooking, the only issues I have is she’s pouring the grease down her sink drain. That’s a great way to clop a drain down the line. If you don’t want to cook with grease, drain it into an empty container and throw it in the garbage. It will save you on plumbing,’ one wrote.

Another said: ‘I don’t understand? My family’s done this forever, at least when it comes to stuff like making tacos, pour the grease out, rinse in water, add it back to the pan with a little bit of water and the seasoning, mix and then let it simmer and evaporate the water’