A tearful Kylie Minogue steals the show at Glastonbury

London: Kylie Minogue broke down in tears at Glastonbury as she recalled how she missed performing at the festival 14 years ago after being diagnosed with breast cancer. 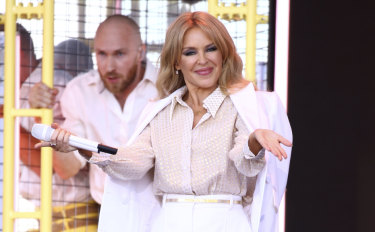 Kylie Minogue performs at Glastonbury at Worthy Farm in Somerset on Sunday.Credit:AP

The Australian singer, 51, was due to headline the event in 2005 but had to cancel to undergo treatment.

But on Sunday, Minogue took to the Pyramid Stage for her first full set at the event, where she was briefly joined by Coldplay star Chris Martin.

The Australian received a rousing reception for an appearance applauded for being a festival highlight.

"In 2005 I was meant to be here," she told the crowd. "Circumstances meant that I did not make it. I wished things were different, but life is what it is. We are all together in this moment."

Minogue said it was one of the moments where she "realised not only this story but our story", as she gestured to the crowd.

"Thirty plus years together," the former Neighbours star said.

The singer said in 2005, when she missed the festival, she instead watched it at home.

"Some of the artists covered some of my songs and that is the spirit and gracious nature of Glastonbury," she said.

She then invited Martin to join her on stage where they performed her hit Can't Get You Out Of My Head.

Minogue performed a mix of old and newer hits, including Especially For You, Locomotion and Love At First Sight.

She also welcomed Nick Cave on stage for a duet of their 1995 single Where The Wild Roses Grow.