BTS’ RM loves spending time with Rapmon, even posting Instagram pictures of his dog in a Squid Game-inspired outfit. Here’s what we know about this K-pop group and their not-so-secret Squid Game references.

RM, real name Kim Namjoon, is the leader of BTS. He’s the songwriter behind hits like “Boy With Luv” and “Dynamite.” He also releases music as a solo artist, even appearing in one remix of Lil Nas X’s “Old Town Road.”

Outside of his role with BTS, this rapper is the proud dog owner of a white American Eskimo dog named Rapmon, in honor of RM’s stage name. The dog spends time with RM’s family when he’s on tour. These two were reunited as seen in pictures posted to RM’s Instagram.

Thanks to their individual Instagram accounts, fans learned more about the day-to-day activities of the boy band members. That includes RM, who visited New York art exhibits in December 2021.

The rapper also shared a series of pictures of Rapmon. The final two images featured this dog wearing a green sweater with the number “456” across the back. This was a reference to the Netflix original series Squid Game, where the main character was awarded that number before entering the life-threatening competition.

This wouldn’t be the first time a BTS member mentioned the popular Netflix series. While performing their Permission to Dance on Stage concerts, V sported a red jumpsuit and face mask similar to a Squid Game character.

While the other members sang about the importance of loving yourself, V showed off some of his best dance moves, accidentally dropping his microphone in the process. Eventually, he removed the black mask and changed out of the outfit.

Still, some ARMYs shared pictures and videos of the moment on social media. During the same Los Angeles residency, Jin sported pigtails similar to the statue from the “Red Light, Green Light” episode. 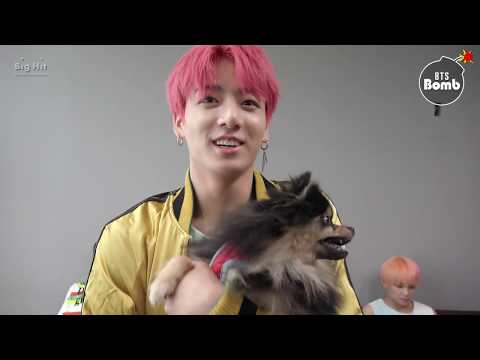 Other BTS members shared pictures of their pets on social media

RM isn’t the only BTS member with an adorable pet. V’s dog Yeontan also made an appearance on his individual Instagram account. Some ARMYs even named him the unofficial mascot of the K-pop group, watching him group up alongside his owner and the other BTS idols.

Recently, Jungkook announced that he became the dog owner of a Doberman named Bam. The “Golden Maknae” shared videos of themselves hanging out in his bed and even a picture of Bam wearing a funny outfit.

Other BTS members shared their love for their family pets. That includes J-Hope, who said that after receiving a Grammy nomination, he wanted to call his dog Mickey. While on BTS’ first period of “rest and relaxation,” Suga shared a picture of himself with his family dog named Holly.