How Halle Berry Feels About Rappers Name-Dropping Her In Songs

Halle Berry has been a popular reference in rap songs throughout the years — to the point where she may be the most-mentioned celebrity ever. Per Global Grind, the Hollywood actor has been name-dropped in almost 1,000 rap songs over the past 25+ years.

Rappers to have mentioned Berry in their music include Biggie, Jay-Z, Kanye West, 50 Cent, J. Cole, and Lil Wayne, as well as female acts like Cardi B, Lil Kim, Nicki Minaj, and Foxy Brown. Berry is so popular in rap music that there’s an entire Spotify playlist titled “Songs That Mention Halle Berry.” If that wasn’t enough, Hurricane Chris made a whole song about her in 2008, “Halle Berry,” (and, for whatever reason, performed the popular song in front of the Louisiana House of Representatives).

During an appearance on “Ellen” that same year, Berry and Ellen DeGeneres hilariously danced to Chris’ “Halle Berry,” replicating the music video’s viral dance moves. So, it may be safe to assume that Berry loves all the shoutouts she’s been receiving over the past two decades. More recently, in a resurfaced Twitter clip from 2019, Berry explained how she really feels about rappers mentioning her in their songs. Find out more below.

Halle Berry is 'flattered' that rappers still remember her 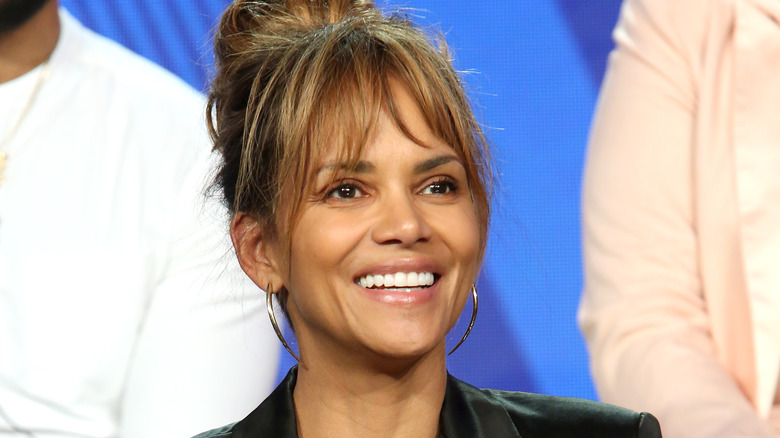 On June 9, Halle Berry shared a clip of a 2019 interview with “Hot Ones,” where she discussed being one of the most referenced celebrities in rap music. “OK, I always get asked which rap song reference is my favorite… here is my answer,” Berry’s Twitter caption reads.

After host Sean Evans asked the Hollywood actor which mention was her favorite one, she revealed that she loves them all equally. In fact, the mom of two sees all the references as her offsprings. “I think of these references like my children in a way,” she laughed. “There’s no way I could pick one… To pick one would be like picking my daughter or my son — you know, I love them all.”

She also revealed that she loves all the attention and admitted that she’s surprised people haven’t forgotten about her.  “I love all these artists,” she continued. “I’m always flattered when any one of them include me, and that they still remember me.” To be fair, who could ever forget about Halle Berry?