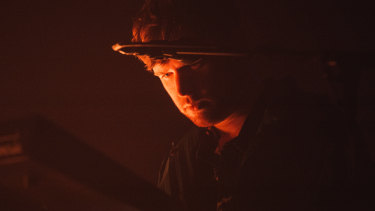 James Blake performs at The Forum in Melbourne.

Once a dubstep DJ in underground London clubs, James Blake has seemingly become the go-to guy for every rap or R&B superstar seeking a touch of melancholy on their tracks.

Beyonce, Kendrick Lamar and Kanye West are among his collaborators, although if any of the showmanship of these stadium-fillers has rubbed off on the 30-year-old singer-songwriter-producer, it wasn't much in evidence.

Blake was content to sit stage-right behind his bank of keyboards for most of the 90-minute show, letting the convincing be done by the eclectic music of his four albums, with an emphasis on this year's Assume Form.

He was helped by some serious kit. Versatile drummer Ben Assiter wielded an electronic bass drum that clobbered us over the head, while Rob McAndrews at the synthesiser rig conjured a sub-bass sound so deep, at one point it seemed to suck all other noise out of the room.

This power was somewhat in contrast to Blake's singing. His debut single in 2009 was called Air & Lack Thereof, and his vocal did feel hermetically sealed at times. He has wonderful control – clear in the way he mimicked some of his studio cut-up experiments – and beauty in the frequent flights to falsetto, but lacking in emotional release.

The mannered approach served opener Assume Form well, giving a slightly robotic quality to the lyrics – "I'll leave the ether/ I will be reachable" – to contrast with McAndrew's electric cello and Blake's delicate piano figure, commenting on the narrowing gap between man and screen.

That gap became indistinguishable onVoyeur, Blake's precise repetition of its self-blaming mantra aiding its build into a techno anthem, and wonderful new song Loathe To Roam, where he stood at the mic to wail defiantly over a motorik rhythm.

This duet with technology became literal on Mile High, Blake harmonising with an isolated track of Travis Scott's guest vocal from the album to otherworldly effect.

However, the moments Blake broke free of his vocal molasses were the most joyous. Newly in love, Assume Form contains the first romantic songs of his career and he appeared to relish the chance afforded by Can't Believe The Way We Flow to go into falsetto soul man mode, the sample of The Manhattans' 1976 smoocher Feels So Good helping the dancefloor transition from pogoing to grooving.

The playful Can I Come Too, a melody one can almost imagine Bing Crosby crooning; Buckley-esque ballad Are You In Love?; and a closing, solo piano cover of Joni Mitchell's Case Of You proved Blake doesn't need to move much to be moving.

Best of all was Don't Miss It, prefaced with a plea from Blake for men to not bottle up their feelings.

"I wish someone would have told me that 20 years ago," he said, before a performance that exposed his regret with a long, long note that morphed into an anguished cry.

The cool collaborator was best when sharing his own feelings.